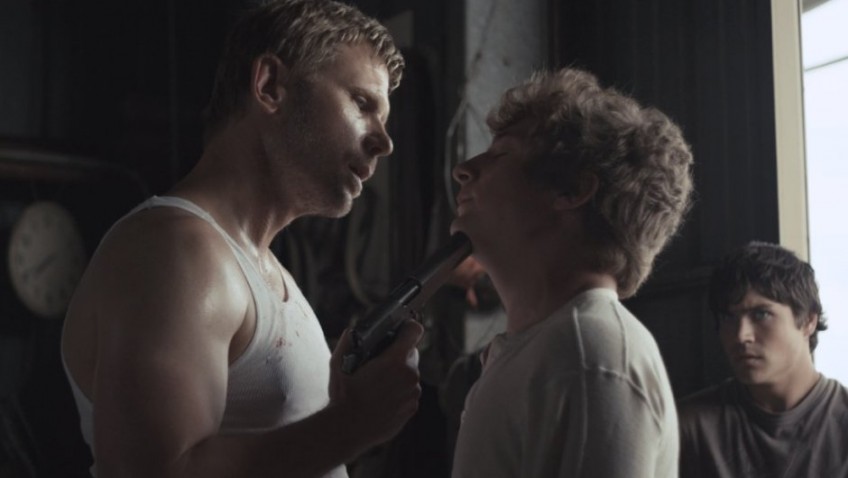 A high proportion of independent films coming out of the States seem to be Southern Gothic thrillers, but most will struggle to compete with Blue Ruin, Jeremy Saulnier’s terrific low-budget thriller released in May.  Even without this point of comparison, Zeke and Simon Hawkins’ thriller, We Gotta Get Out of This Place, is a disappointment, starting with two strong opening scenes, but gradually dwindling down to a succession of nonsensical clichés.

The setting is an agricultural community in Texas outside of Corpus Christi.  In the first scene, a boy, who we later identify as Billy Joe (Logan Huffman), robs the safe of his cotton farmer boss, Giff (Mark Pellegrino).  His motive, which we have to question in light of later developments, is that he wanted to treat his girlfriend Sue (Mackenzie Davis) and his best mate Bobby (Jeremy Allen White) to a wild weekend to celebrate the end of an era.  Although we later understand that Billy Joe is bitter about the situation, Sue and Bobby are going off to University, still a rarity in the community.

Oblivious to Billy Joe’s act, Sue and Bobby are enjoying breakfast at a local diner, and their natural, flirtatious conversation is about the best writing in Dutch Southern’s script.  Bobby is in awe of all the books Sue consumes, her favourite author being the Texan crime writer Jim Thompson.  Southern is clearly chuffed with his choice because Sue gets to tell Bobby, ‘Thompson says that are 32 ways to tell and story and only one plot.’ If this is some knowing-nod to the lack of novelty in Southern’s script, it fails to impress.

The two friends have been united by their academic success, and although Bobby is not tall and good-looking like Billy Joe, in stark contrast to his friend, he is a decent and compassionate young man with a strong moral compass.

For the remainder of the film we learn to what extent personality differences separate the two young men, making it difficult to understand how they ever could have been friends or why, for that matter, Sue has stayed with Billy Joe.

When Giff, who is not just a cruel cotton farmer, but a psychopath of the first order, blames a Mexican ranch hand for the theft and beats him, Bobby intervenes to stop the torture by confessing.  Billy Joe remains silent as Bobby claims he spent the money over the weekend.  Giff does not believe he spent it alone, and to make amends for the theft, forces Bobby, Billy Joe and Sue (who is dragged into it when Billy Joe volunteers that she was involved) to steal money from Giff’s landowner boss, Big Red (William Devane), a criminal with mob connections.

The second half of the film disintegrates into a succession of clichés, with attempts at twists and turns that are neither as there is nowhere for the story to go.   We are asked to believe that Bill Joe, who learns that Sue and Bobby are now romantically linked, seeks revenge by persuading Giff to punish the pair with threats of murder and a near rape. A long chase scene through an abandoned warehouse is a clunky and stale finale to a missed opportunity.