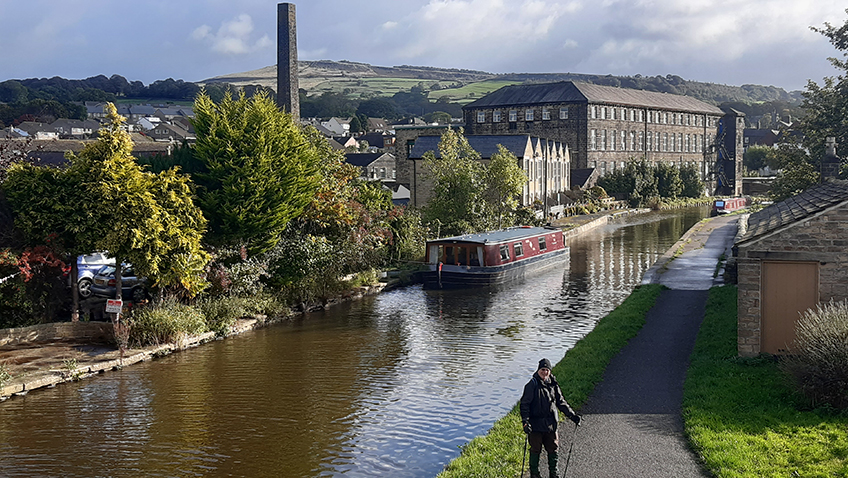 Mature Times travel writer Nigel Heath sets out on part three of his walk from Liverpool to Boston.

The Liverpool to Leeds Canal towpath between busy Burnley in Lancashire and the small hillside town of Barnoldswick in West Yorkshire has a unique claim to fame.

For it is hard surfaced for the whole of its meandering fourteen mile route first through a semi urban environment and then out into magnificent open country with views of the Western Pennines.

This is an absolute gift for those hardy souls more used to sloshing along grassy and muddy paths.

My trekking companion Peter Gibbs and I were now well past the half way mark on the seventh day of our 127- mile walk and fast approaching the mile long Foulridge Tunnel, according to our trusty OS map.

While boaters enjoy the subterranean experience of passing through a tunnel, finding a way over the top can be more challenging for those on foot but luckily a helpful dog walker came along to point out a country lane route.

Back in 1912, a cow called Buttercup fell into the canal at the western end of the tunnel and swam all the way through before being rescued and revived with brandy.

Beyond the tunnel, we came across the welcoming Cafe Cargo converted from the stone-built headquarters of a local haulage company in the days of the horse and cart.

Now followed a delightful three-mile walk into the hillside town of Barnoldswick where we stayed overnight before setting out for the picturesque Yorkshire Dales tourist centre of Skipton some fourteen miles ahead.

This was a blustery day of showers, strong winds and sunny spells with more magnificent Pennine views as we joined The Pennine Way for a while before moving forward from Lancashire into West Yorkshire.

We trudged into the famous tourist honeypot of Skipton, the gateway to the dales, at around four in the afternoon. I say trudged because the stormy weather had taken its toll, buffeting us as we walked along a particularly exposed east facing section of the bank before, thankfully turning north again for the final mile or two into this delightful, centuries old market town.

Finding a cosy tea shop where we could take off our heavy packs and rest a while was now our top priority and luckily, we did not have too far to go to find one perched high above the canal.

As it was now late afternoon, the customer peak had subsided which was good news because we tend to become the centre of attention while divesting ourselves of our sacks and map cases and finding somewhere to park our walking poles without them sliding to the floor with a clatter.

Skipton, a small and friendly town with cobbled side streets, originally grew as a wealthy, sheep and wool trading centre and is dominated by its magnificent castle, parish church and traditional high street market place.

Now revived, we set off on a three mile stroll along the canal to our destination for the night, and were joined by a young man and his dog. They were on their way to a nearby village to spend the evening watching sport on the telly with a friend before walking home again.

We stayed in a charming three- story Victorian house in the village of Cononley before re-joining the canal as it contoured around a wide valley close to the River Aire.

A short walk brought us to the small town of Silsden with its cluster of old textile mills, now like many others along the route converted into apartments so we climbed the steps beside the bridge in search of a coffee shop.

Our luck was in because just a few steps away we came upon Christine’s Kitchen, opened in the summer by Christine Davenport, former Mayor of nearby Hebden Bridge, and there on the wall was a picture of her with Prince Charles.

She’d showed him around when he visited the town after severe flooding back in 2012. This tourist honeypot made national headlines more recently when a nearby dam came close to bursting its banks.

The canal now wound its way around a narrow valley where kingfishers skimmed its quiet waters before reaching Riddlesden where we stopped for a bowl of warming soup in The Marquis of Granby who, according to Google had been a Sixteenth Century general and national hero.

A short afternoon stroll found us at the top of the spectacular Five Locks Rise on the outskirts of Bingley and close to our next overnight hotel stop. 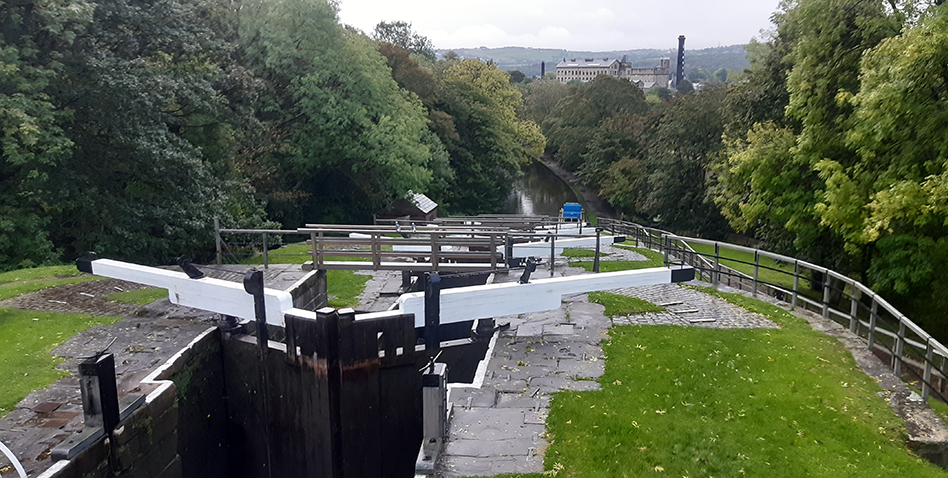 Standing on top of this truly impressive flight, early the following morning, I studied our OS map to take a closer look at the route for our final sixteen miles walk to journey’s end in Leeds.

It skirted the Bradford conurbation before winding its way into the very heart of the city and looked heavily built up and most unattractive but what a surprise was in store as we followed this super highway of the Seventeenth Century.

For there were long stretches of woodland and open countryside along a narrow corridor, joined on occasion by the nearby River Aire.

We passed Saltaire, where philanthropist Sir Titus Salt built a textile mill and village for his valued workers and then on to Apperley Bridge where we called at the Canal and Rivers Trust office and met Towpath fundraiser Carol Buchan.

She showed us a framed document which was a bill of sale for goods carried on the canal over one hundred years ago.

The Railway Inn at Calverley Bridge made a most welcome lunch stop with just six miles of our ten day, 127 miles journey still to go and was followed by an afternoon cuppa at the tiny canal side café run by the Hollybush Environmental Volunteering Centre.

This charity has been operating for over forty years and maintains threatened green spaces around Leeds and beyond.

True to recent form the, canal surprisingly remained a largely green lung right into the heart of Leeds where we were suddenly overwhelmed by bars, cafes and restaurants and hundreds of late Friday afternoon weekend revellers.

But luckily we’d already made plans to escape to open country on another canal walking adventure.

The Canal Companion Leeds and Liverpool by Michael Pearson and published by Pearson and Son Ltd is a must for this walk as are the appropriate OS Landranger maps.

There were comfortable Premier Inns most conveniently located not far from the canal in Liverpool’s Albert Dock, Wigan Town Centre, Chorley, Blackburn and Burnley.