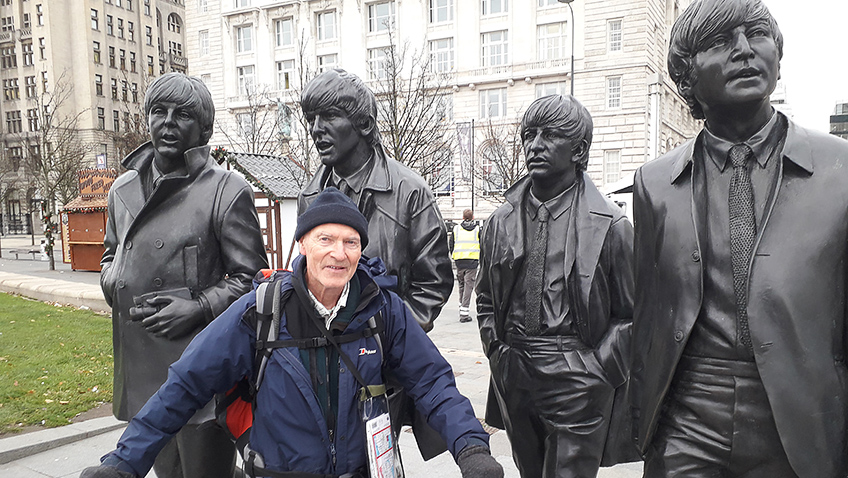 Nigel Heath sets out on an epic cross Britain walk

Mature Times travel writer Nigel Heath sets out on part one of his walk from Liverpool to Boston.

Many memorable journeys have started from Britain’s great ports and none more so than from Liverpool on the banks of the mighty river Mersey.

From here in times past countless souls have sailed forth seeking new lives over the rainbow of their dreams and even today ferries sail to Ireland and cruise ships depart for sunnier climes.

My walking colleague and fellow journalist Peter Gibbs and I were also starting out on a long journey but we were turning our backs on the Mersey and following the 168 mile long Liverpool to Leeds canal.

From there we would be picking up the Aire and Calder Navigation and walking on another fifty miles to the port of Goole on Humberside before turning south and following waterways, country paths and lanes all the way to the ancient fenland port of Boston in Lincolnshire.

For it was from here a year ago that we set out on a new 280 mile Macmillan Way Association walk across the country to the North Wales resort of Barmouth on the Irish Sea.

Now we’d travelled up by train from Bristol and after a night spent appropriately in an old Albert Dock warehouse superbly transformed into a comfortable Premier Inn, we set out walking along the promenade beside the river heading for the old Stanley Dock and the Stanley flight of locks accessing the canal.

We were soon dwarfed by what is believed to be the world’s largest brick built warehouse where President Roosevelt’s wife Eleanor visited wounded GIs towards the end of WW2.

Here we met Canal and River Trust volunteer lock keeper Stuart Clay waiting to lock in the first of the hundreds of narrow boats and other craft we were to see along the way.

He told us how German warplanes used to strafe the canal to disrupt its floating traffic and how bullet holes could still be seen in the stone bridge parapets nearby. 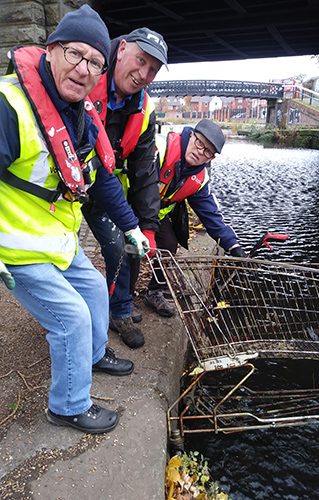 Canal and River Trust volunteers Len Weeks, Joe Harrison and Jim Carr hauling a shopping trolley out of the water

Further on we came across fellow volunteers Len Weeks, Joe Harrison and Jim Carr in the act of pulling a supermarket trolley out of the water as part of a regular rubbish collecting and litter picking exercise.

Having put some miles behind us, we picnicked beside the canal close to the Primrose Valley Country Park and then walked on towards Aintree, the home of the famous racecourse, where we were conveniently booked in to the Premier Inn, Liverpool North, just a couple of minutes walk from the canal itself.

En route, we stopped for at least five minutes to watch as two male coots ferociously battled it out beak and claw for the intentions of a female who seemed to have already made her choice as she kept darting in and pecking the outsider until he was eventually driven off.

We were on our way again just as the sun was rising over the water ahead of us and casting an orange autumnal glow that made me blink and we knew we would still be walking when it started to dip towards the west in late afternoon.

For it was some sixteen miles trek to journeys end in the West Lancashire village of Burscough where Peter had booked us into an hotel conveniently close to the canal.

“Have you got your head torch handy?” I asked, only to hear that it was buried somewhere in the bottom of his rucksack.

Walking across the country on a long distance trail, always moving on and never going back, is like savouring a cross section of town and rural life and so it was on that Saturday morning when we entered the small town of Maghull to meet a merry party of sixteen-year-olds out on a sponsored canal walk for the Alzheimers Society.

Then further on along the embankment we were looking down on the local playing fields where a number of football games involving groups of young people were in full swing.

It wasn’t until around midday that we finally walked out into open country and felt that Liverpool and its environs were now well and truly behind us.

While squadrons of ducks cruised in and out of the reeds and the occasional skein of Canada geese passed in ‘v’ formations across the pale blue skies, we walked ever on through patches of beech woodland, golden in the weak afternoon sun and past dense fields of leeks and other winter crops.

It was around 4.30pm and on approaching Burscough that we met a lady dog walker and asked how far it was to our hotel.

“Oh that’s miles away,” came her shock reply. We should walk on pass the village for about a mile until we came to the Rufford Arm of the Leeds Liverpool Canal and then we should follow that until we’d eventually come to the hotel, she instructed. 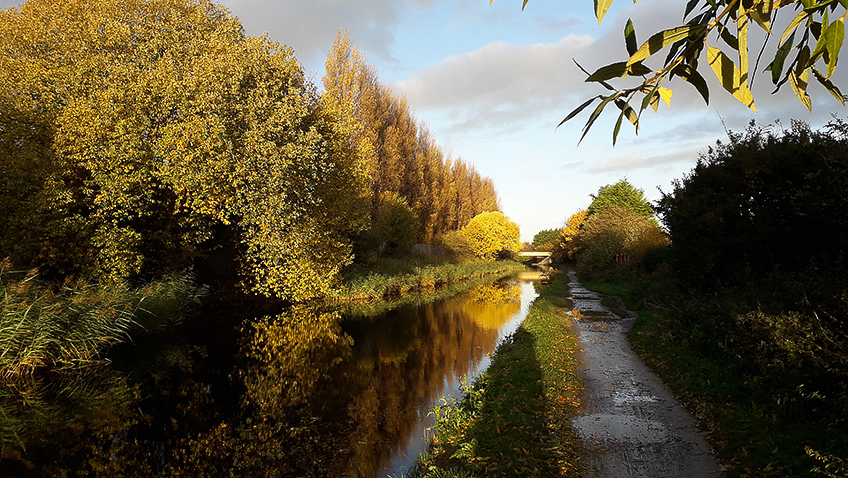 Setting out from Aintree in the early morning

By now our pace had slackened in anticipation of journeys end but now we picked it up again with some urgency as the deployment of our head torches was suddenly a real possibility.

We reached the canal’s Rufford Arm turning in a twenty minute march only to discover from another local that the hotel was another hour’s walk away and therefore impossible to reach in daylight.

But then when we discovered that a section of the towpath was closed for repairs, we gave up the attempt and luckily found a local taxi driver able to pick us up shortly and take us to the hotel.

This was by no means the first time we’d got into a muddle by misreading a map or walking past a correct turning while chatting or making some other mistake which was the case on this occasion.

For when Peter found the hotel with a postal address of Burscough and looked it up on Google Maps he spotted that it was only a couple of minutes from the canal but the only problem was that was it was the wrong canal!!

Nigel and Peter will now be continuing their walk to Wigan and then on to Skipton in the Yorkshire Dales and Mature Times will be carrying their next report at the end of January.