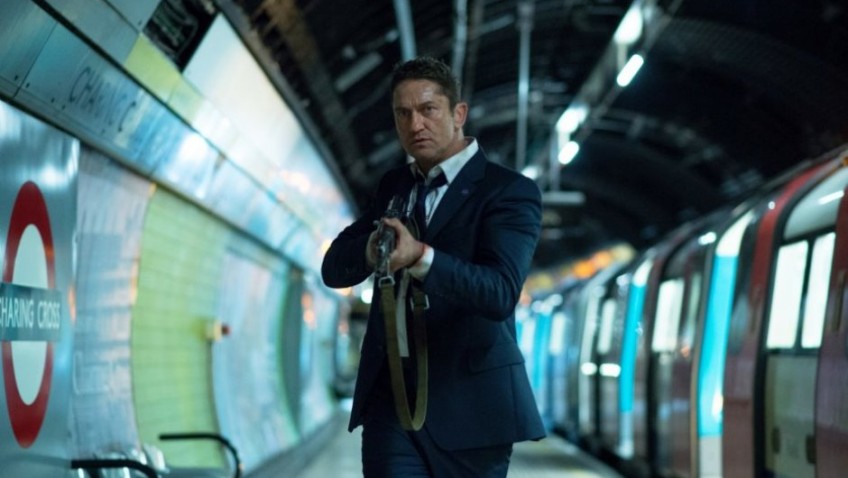 A terrifying vision of the future in London

Sometimes Hollywood has to do some soul searching.  How many times can you have terrorists attack the President in the White House and still have it standing for another attack?

Not even three years have elapsed since the remarkably similar films, White House Down and Olympus Has Fallen were released, and it was decided that enough was enough – at least for the White House.  The President, however, was still fair game and, in the sequel to Olympus Has Fallen, London has Fallen, the solution is to move the President to London and attack him there.

Presidential body guard Mike Banning (Gerald Butler) is about to become a father and wants to live to see his son join the Secret Service. He is agonising over the wording of a resignation letter when the call comes through: his country needs him.

All of the world heads of state (no doubt with the exception of places like North Korea, Zimbabwe and Syria) are attending the funeral of the British PM who has died suddenly in mysterious circumstances.

You would think a full autopsy would have been carried out before the funeral, but it is only after President Benjamin Asher (Aaron Eckhart, reprising his role in Olympus has Fallen) is on English soil that he and Manning learn that the PM has been poisoned.

By then all of the other heads of state are dead, and most of London’s landmarks have been seriously damaged.  It is only thanks to Manning’s fast thinking and marksmanship that the President remains alive.  Secret Service Director Lynne Jacobs (Angela Bassett), one of three females in the film, lives a few hours longer.

The Joint Chiefs of Staff, the Vice President (Morgan Freeman), the President and Manning soon learn that the elaborate attack, just two years in the making, is Pakistani criminal arms dealer Aamir Barkawi’s (Alon Moni Aboutboul) revenge for the drone attack that killed his daughter in Lahore.

‘Revenge must always be profound and absolute,’ he advises his son, Kamran (Waleed F Zuaiter). Kamran masterminds and carries out the attack by infiltrating the police, all security forces and, judging by the amount of arms and munitions, customs officials.

As we saw from that resignation letter, Banning has a way with words. ‘Every single one of these guys is a terrorist asshole until proven otherwise,’ he snarls while machine gunning anyone in a uniform, including ambulance drivers.  This strategy eliminates most of the enemy, but also any suspense as Banning is not very interested in the proving otherwise.

‘Training Day’ director Antoine Fuqua had fun with Olympus Has Fallen, playing on the Die Hard model of a single building under siege with the film’s hero, who is unknown to the enemy, trapped inside.  But Nakafi, of Swedish Noir persuasion, goes for gore, body count, explosives, ugly sets and the destruction of anything resembling subtlety.

The plot is so simplistic that we have time to contemplate to what extent Butler and Eckhart lack the chemistry of Jamie Foxx and Channing Tatum who played similar roles in White House Down.

The film is a combination of three genres: the action drama, the catastrophe movie and the buddy movie, as Butler and Eckhart are joined at the hip.  The lack of chemistry and the absence of humour or wit in the banter between the two takes away the pleasure of the buddy movie format.

What passes for a script, is credited to the writing team behind Olympus Has Fallen and two others.  Just why you need four writers to come up with lines like Banning’s, expressive comment, ‘I’m thirsty as fuck’ (directed as the President no less) is a question only co-producer Butler might be able to answer.

It’s easier to figure out why Morgan Freeman was brought in to look wide-eyed in disbelief as the Vice-President.  Presidential hopeful Hillary Clinton is considered by many to be too old to run for President, but alert and defiant at 78, Freeman makes Clinton look like a Spring Chick.

While Banning is supposed to represent the spirit and might of the loyal US Secret Service, he is also such a parody of the ugly American that you can imagine Isis using the film as a recruitment tool.

As Butler finishes off a Muslim-looking extra who is clearly not going anywhere, he growls, ‘Why don’t you guys pack up your shit and head back to Fuckheadistan.’   That ought to settle things – until the next sequel.