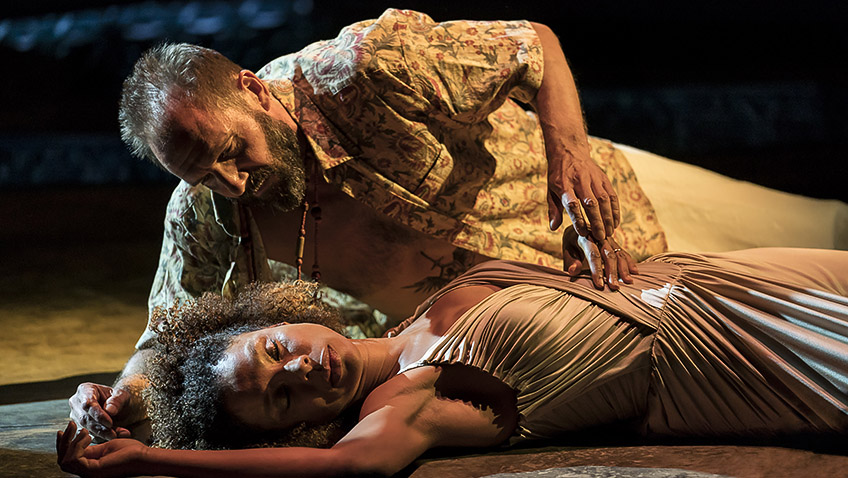 Shakespeare, Dryden, Berlioz, Sardou and Shaw have all written about Cleopatra and she has been played by such actresses as Sarah Bernhardt, Tallulah Bankhead, Vivien Leigh, Janet Suzman, Glenda Jackson, Helen Mirren, Judi Dench and Mark Rylance (sic).

The serpent of Old Nile has always had a bad press and Shakespeare, like everybody else, observes her through the biased eyes of Rome, who loathed her because they were frightened of her. 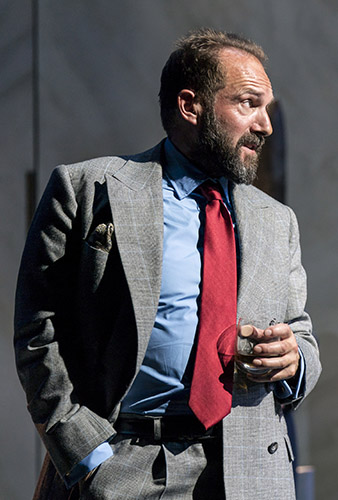 Ralph Fiennes in Antony and Cleopatra

On screen she has been played by Theda Bara, Claudette Colbert, Hedy Lamar, and Elizabeth Taylor, the latter falling in love with Richard Burton, who was playing Antony, a famous example of life imitating art.

Antony and Cleopatra, the most famous lovers in history, are having a mid-life crisis, kissing away kingdoms, sacrificing everything for one last fling. Insanely jealous of each other and long past their sell-by dates, they bungle everything.

The roles, physically and sexually, are amongst the most demanding in the Shakespeare canon. Ralph Fiennes and Sophie Okonedo are excellent casting. The smooth modern dress production is by Simon Godwin.

The play is Antony’s tragedy. The triple pillar of the world is transformed into a strumpet’s fool, who is so infatuated that he neglects duty and honour. The sea battle of Actium is a humiliating disaster waiting to happen.

Antony even bungles his own death; and then lives long enough to learn that Cleopatra is not dead but merely wished to find out what he would do if he heard she were.

Shakespeare’s Cleopatra, devious, cunning, moody, voluptuous, vulgar, farouche, is one of the great female roles and one of the most difficult. She is both regal queen and wanton whore, a woman of such infinite variety, that her mood changes minute by minute, and sometimes even in mid-sentence, going from one extreme to another. 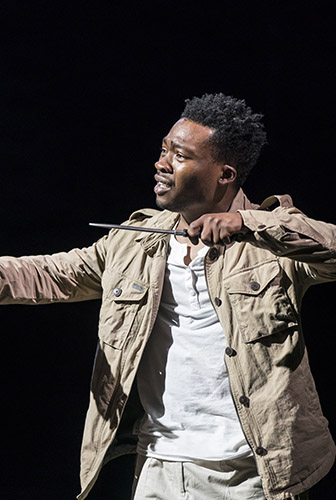 Fisayo Akinade in Antony and Cleopatra

The captured Cleopatra calculatedly upstages Antony in her stage-managed death scene. 39 years old, she commits suicide in style when she learns that Octavius Caesar (Tunji Kasim) intends to parade her through the streets of Rome in triumph.

Cleopatra, a glamorous diva, has always relied on kitsch. Summoned to Rome by Antony in 41BC, her arrival by barge was in the Hollywood extravaganza manner choreographed by the Busby Berkeley of her day.

The roles of Eros, Antony’s faithful servant, and the Messenger, who brings the volatile Cleopatra news of Antony’s marriage to Octavius Caesar’s sister Octavia, have been made into one character, which is great for Fisayo Akinade. Eros is not only liable to be beaten and have his throat cut; he is also flung, fully clothed, into Cleopatra’s private pool and nearly drowned.

Surprisingly, Mardian, the eunuch, and the Clown, who brings Cleopatra her asp, have been cut. Agrippa is played by Katy Stephens as a female soldier, which means that the scenes with booming Enobarbus (Tim McMullan) are much more interesting.

I should perhaps warn you that the performance lasts three and a half hours (including interval); but the National Theatre audience I saw it with at a matinee had no difficulty and took it all in their stride. 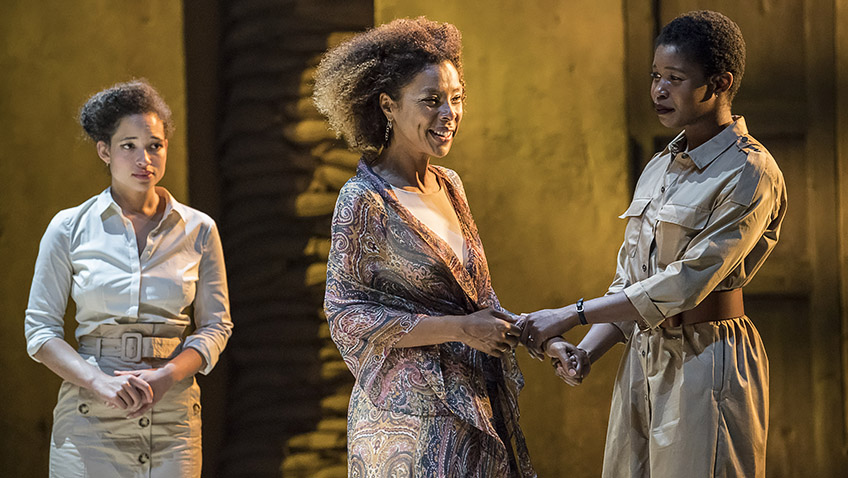