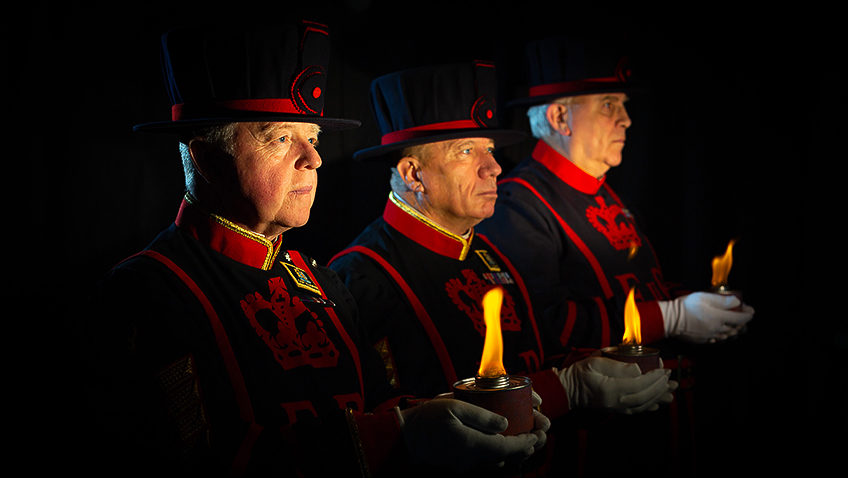 This November, as the nation commemorates the centenary of the end of the First World War, a new installation at the Tower of London, Beyond the Deepening Shadow: The Tower Remembers, will fill the moat with thousands of individual flames; a public act of remembrance for the lives of the fallen, honouring their sacrifice. The installation will run from 4 – 11 November, for seven nights before, and on Armistice Day 2018.

Beyond the Deepening Shadow is an evolving installation, which will unfold each evening over the course of four hours, with the Tower moat gradually illuminated by individual flames. The unfolding visual spectacle will be accompanied by a specially-commissioned sound installation; a sonic exploration of the shifting tide of political alliances, friendship, love and loss in war. At the centre of the sound installation lies a new choral work, with words from war poet Mary Borden’s Sonnets to a Soldier and it will begin with a procession led by the Yeoman Warders of the Tower of London.

Emerging from the fortress, the Yeoman Warders – themselves all distinguished former servicemen and women – will ceremonially light the first flame. In a moving ritual, a select team of volunteers will then proceed to light the rest of the installation, gradually creating a circle of light, radiating from the Tower as a powerful symbol of remembrance. The display will conclude at 9pm every evening.

“The First World War claimed the lives of over 18 million people across the globe. We remembered them at the Tower on the anniversary of the start of the war, and it feels equally appropriate that we should again commemorate their sacrifice 100 years after hostilities came to an end.
Many of the Tower community have served in the Armed Forces, and it is important for us to ensure that those who lived, served, fought and died during this time continue to be remembered, and that the lessons from these conflicts continue to be shared.”

“Beyond the Deepening Shadow is a fitting way to draw our centenary commemorations of the First World War to a close: transforming the moat into a circle of flames around the Tower, a powerful symbol of light in darkness.
It will be a beautiful spectacle and we hope that, as in 2014, the public will come to the Tower to find a shared space for reflection on the sacrifices of the fallen.”

The City of London Corporation, the Charles Wolfson Charitable Trust, the Worshipful Company of Fishmongers, and a number of livery companies and other generous donors have supported the project.