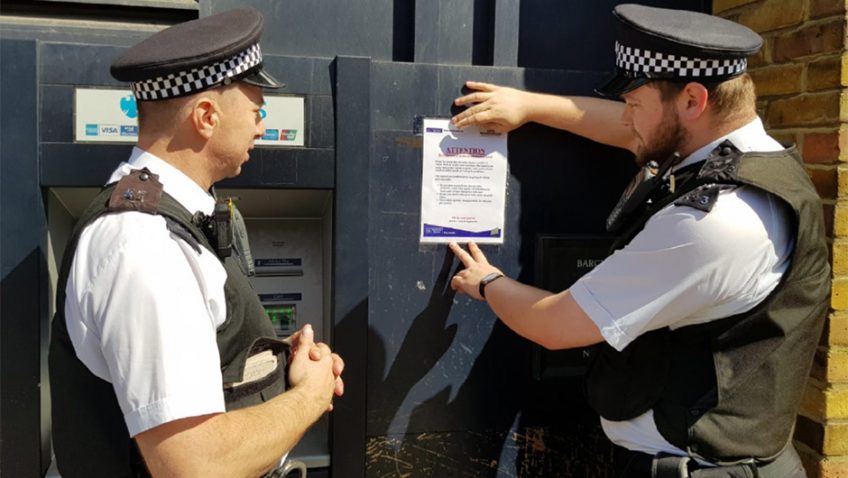 A disturbing new wave of cash machine crime has hit a North London borough and pensioners are a prime target. Constable Samuel Lowe reports on what’s been happening and how he and his team are working to combat it:

During the summer of 2017, police in the North London borough of Enfield became aware that members of the public were being targeted for a particular type of crime; while using cash machines, people were being deliberately distracted and then, before they realised what was going on, their cards were being stolen.

Noticing a pattern was emerging, two officers, Constable Samuel Lowe and Constable Brian Masters, of the Neighbourhoods Policing Team, began to focus on tackling the problem.

Many victims are pensioners

What was apparent early on, was that many of the victims were pensioners, and that this was having a real and damaging effect on their lives. Even though it is normal for the bank or building society to repay any money lost to their customers following cash machine theft, many people suffered in other ways as a result of these crimes; the trauma and shock affected victims’ confidence, their ability to relax and even their willingness to go out on their own. Because of the impact these crimes were having, PC Lowe and PC Masters took a special interest in the case and set up Operation Safe Card, the Enfield Borough initiative to fight back against these criminals.

The main methods used by these criminals would always include a distraction. In most cases, the criminals would be waiting near a cash machine and once somebody started using the machine, one of the criminals would linger nearby and watch the PIN number being entered. Once the first criminal was sure they had seen the PIN, a second criminal would normally approach the customer and distract them by telling them the machine wasn’t working and waving a leaflet or some £20 notes in front of the customer. What was not clear to the victims at the time was that while holding the leaflet, the criminal was disguising the fact that he was pressing the cancel button on the cash machine and then stealing the card out of the machine without the customer seeing. The criminals involved are very well practised at this, and very confident. They will usually stay nearby to convince the customer that their card is still stuck in the machine.

Another way the criminals will distract customers is to tell them they have parked illegally, and will have to pay a fine, but can cancel the fine if they go to the nearest cash machine. When the customer is at the machine, the same distraction is used with the leaflets. Criminals will also sometimes try to get the customer to put more cards into the machine to “see if they work”, but with the intention of stealing those, too.

By making people aware of these scams, the police hope to reduce the number of people who might be targeted. A big part of that work is cooperating with charities like Age UK, who have been helping to spread the message and teach the elderly communities of Enfield what the best practices are. PC Masters and PC Lowe have been working hard to refer as many cases to Age UK as they can; the assistance of charities like Age UK is invaluable.

Two banks have also supported the new operation: The Bank of Cyprus UK and the regional managers of Barclays for the area around North London have both welcomed the officers to provide training and guidance on how best to support elderly customers who have been targeted and report the crimes promptly. In cases such as these, the earlier the bank and the police are aware, the easier it is to stop any money being spent by the criminals.

It is important to be aware of these types of theft and take precautions wherever you can. The best way to protect yourself is to be very careful while putting in your PIN number. Use one hand to cover the keypad while typing the digits in, and check who is around you. If someone starts to speak to you, this on its own is already unusual while at a cash machine. Try to be careful of how close this person comes to you, and ask them to stand back. If you do think someone is trying to steal your card, do not try to challenge or fight them off, as the card and any money spent can be replaced by the bank. Instead, tell a member of staff at the bank or shop where the cash machine is and call the police right away. Some people do not call their bank or the police until much later when they get home, but if you call the police straight away, there is a much higher chance of the criminals being caught while they are taking money out.

While we understand that this is a local initiative to Enfield, and similar schemes are not operating in other areas of the country we feel it is important to highlight the potential for cashpoint crime. Unfortunately, older people are deemed to be easier victims when it comes to this type of crime and are therefore regularly targeted – the message should therefore always to be careful and vigilant when using cash machines and if you see anything suspicious then please do report this straight away.