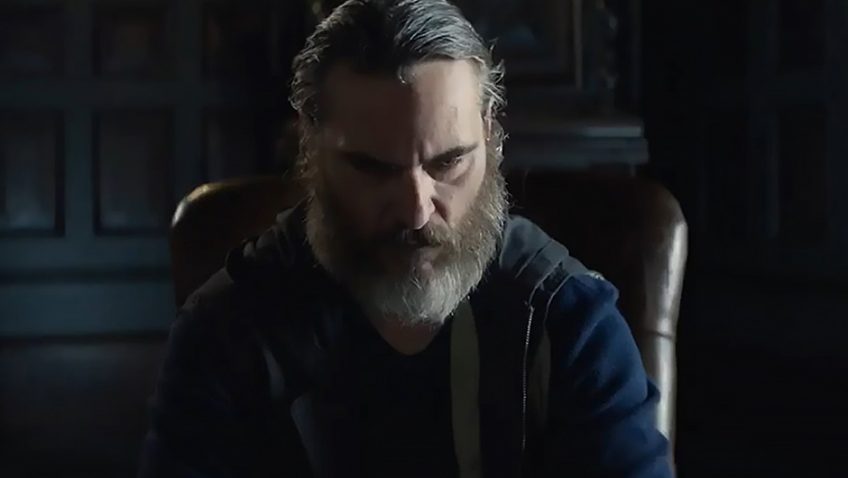 You feel very much present in this tense thriller

Nearly seven years after her adaptation of the best-selling novel, We Need to Talk about Kevin Scottish writer/director Lynne Ramsay (Movern Callar) is back with another cracking adaptation that will leave you shaken, if not stirred. It’s hard to imagine that Jonathan Ames’ novella of 97 pages could be pared down any more, but Ramsay, like her main character in the film, sheds anything that isn’t essential to her mission. She goes for the jugular, dispensing with most of the plot and with the back story of a kidnapping in order to focus on the emotional life of the victim’s would-be saviour, a contract killer. But as played by Joaquin Phoenix in a mesmerising, bravura performance that is as physically as it is psychologically convincing, this is like no hit man movie you’ve ever seen.

If Joe (Phoenix) were an animal, he’d be a bear and not for his attraction to water. With his long, thick, unkempt hair and beard, powerful torso and his ability to enter buildings undetected, he is an imposing presence who you don’t want to mess with. When the film opens, Joe is wrapping up a job (all we understand is that it looks nasty) in Cincinnati, phoning his agent, John McCleary (John Doman) with a two-word message: it’s done. Talking too much is a professional liability.

He returns to his house in Queens which he shares with his mother (Judith Roberts), although he tries to ensure that no-one knows where he lives. They also share a sense of humour. She tells Joe that she saw the film Psycho earlier that day and was scared. In a bit of grim foreshadowing, he jokingly makes the knife-stabbing gesture of the shower scene while approximating Bernard Herrmann’s famous music, which is also echoed in Jonny Greenwood’s brilliantly disturbing score. This detail – and the scenes from the loving relationship between mother and son – are not in the book, but express everything you need to know about this troubled killer with a suicide wish and a melting heart.

The next day Joe pays McCleary a visit at his office and gets his next job. Nina, (Ekaterina Samsonov), the angelic-looking 13-year-old daughter of Senator Votto (Alex Manette) has been kidnapped and he is paying McCleary handsomely to get her back. ‘I want you to hurt them,’ Votto tells Joe when he pays Votto a visit to get Nina’s photo. Joe, an ex-Marine and ex-FBI agent, with the scars all over his meaty body to prove it, specialises in rescuing girls from the sex-trade.

Votto’s job is routine and Joe’s rigorous preparation and swift, professional execution of it are captured in a thrilling sequence. Ramsay films the scene of Joe in the up-market brothel in a series of silent, black and white long shots as though we are viewing it through the building’s surveillance camera after the fact. She heightens the friction with an equally jarring soundtrack, as a recording of Rosie & the Originals’ 1961 hit, Angel Baby permeates the building like lounge music. It is only when Joe finds Nina (drugged and counting numbers to numb the horror of what she is experiencing) that colour and medium and close-up shots return.

Joe drives Nina to the safety of a remote motel where they await the arrival of her father, with Joe relaxing a bit as he believes the job is done. But things don’t go according to plan. Someone has double-crossed Joe and betrayed Nina. 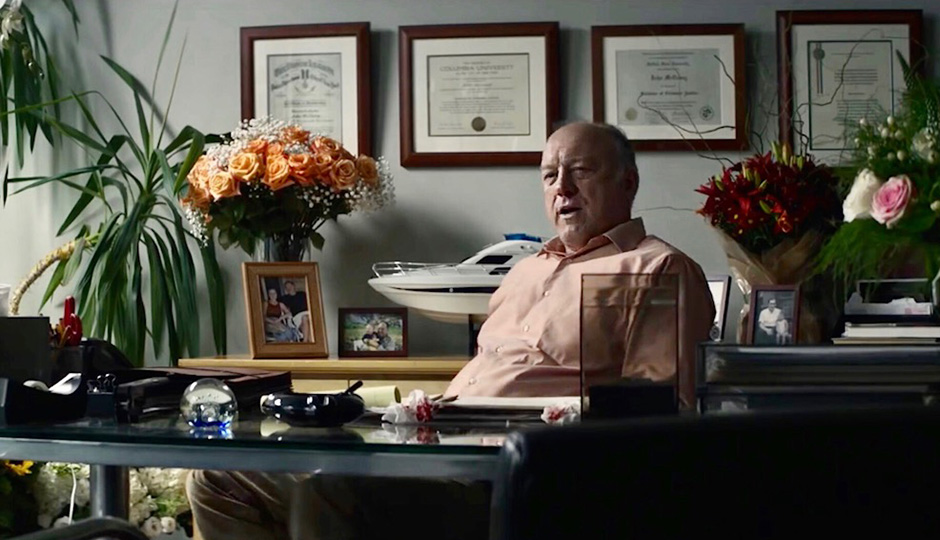 John Doman in You Were Never Really Here

Ramsay seduces us with her inventive camera work that never feels gimmicky; not even when she films a fight scene through a broken mirror. Each shot is beautifully framed and Thomas Townend’s Attack the Block cinematography, backed by Joe Bini’s editing, is full of menace and tension.

While Ramsay sacrifices clarity by taking a hatchet job to Joe’s quest to piece together the details of his deception, we are spared little of the book’s nihilism and violence. On the other hand, she injects some very black humour and emotional complexity when you don’t expect it, as in a scene where Joe gives his last painkiller to the assassin in his house, and lies down next to him on the kitchen floor, holding the dying man’s hand as he joins the dying man who, in his pain, is humming a tune.

Ramsay’s way of translating words into images, using Bini’s precise editing, is highlighted most strikingly in the short flashes of Joe’s childhood. Without any expository dialogue we understand that Joe still punishes himself with the guilt he felt as a child when he managed to hide from his father’s hammer, leaving his mother to take the force of the blows. We cannot fail to see that Joe’s weapon of choice thirty years later is a hammer. Unlike in the book, where Joe prefers putting people out of commission to killing them, in the film it is clear that every rapist or sex-trader he approaches with the hammer is his father.

You don’t need to be a psychiatrist to know why saving girls from evil men is the masochistic vocation Joe has given himself, one that ensures he can never form a lasting relationship. But the one image that haunts Joe is his failure to save a truck load of Chinese girls. He is determined that Nina will not be another botched job.

It is difficult to imagine anyone but Phoenix (Inherent Vice, Her, Signs, The Village, Gladiator) in this role, arguably his best since the Johnny Cash biopic Walk the Line. He tells the story with his body, his eyes, his gentle-giant consideration, his ruthlessness when need be and his continual pain. Ramsay does not give us cartoon: the pain that isn’t on his body in the form of a wound, a self-extracted tooth or a scar, is in his face.

And yet there is something TV-sleazy about the depiction of young sex slaves and exploitative in the way we are led voyeuristically into the boudoir wondering how much we will witness. For all its originality, this is another film in which a man’s chance at redemption is dependent on the suffering of girls – and an old helpless lady reading in bed.

Ramsay’s attempt to give Nina the strength and courage that little Joe lacked is poetic and topically feminist, but it comes, not from the book or what we’ve been watching, but out of nowhere. This is Joe’s story, not Nina’s and it deprives Joe of his final chance to make good the botched job that haunts him.