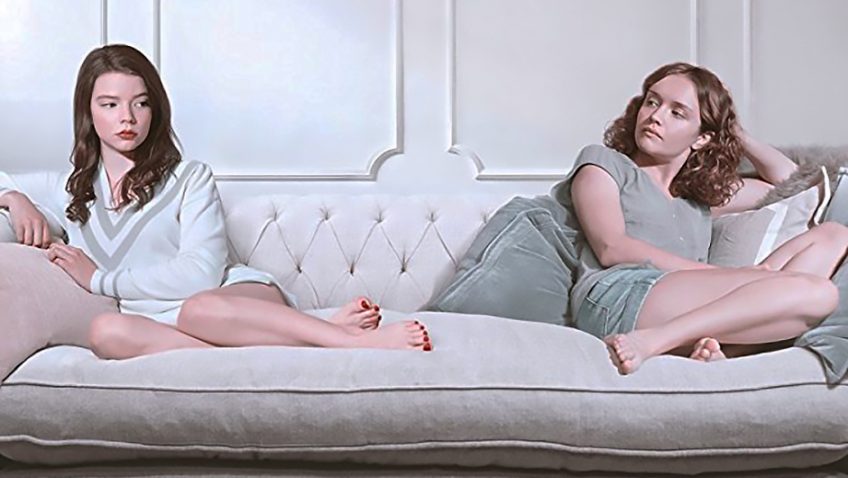 takes the basic plot and premise of Peter Jackson’s (five years before The Lord of the Rings trilogy) Heavenly Creatures, adds a few million dollars to the households’ incomes of the two teenage protagonists; a couple of years to their ages, and transports them from New Zealand to the affluent NYC-satellite state of Connecticut. Two thirds of the film is a tense, sleek and sharply written bonding of two 17-year-old weirdoes who complement one another’s taste for the macabre. The final third unravels as it fails to develop the story, sustain the tension or lead to a satisfying pay-off.

Like Martin McDonagh (Three Billboards Outside of Ebbing, Missouri) Finley is a playwright who has turned to film script writing and directing. His style might be closer to David Mamet (you can imagine this film working even better on the stage) than to Peter Jackson’s, but Mamet never explored the depths of evil in pretty girls in big houses with stables.

If you are a playwright planning a psychological thriller about a high strung teen who cannot feel real emotion and is devoid of empathy, you might start with Peter Shaffer’s/Sidney Lumet’s Equus. A teenage girl, Amanda (Olivia Cooke, Ready Player One, The Limehouse Golem) reaches out to comfort her trusting horse one night.

We know something awful is going to happen but Finley, though only 28, already knows that what is left to the imagination is often more powerful that spelling it out. In any event, half way through the film, over a game of solitaire chess on a giant outdoor chess board, Amanda relates the incident to her best and only friend Lily (Anya Taylor-Joy, Split) as she drags the knight into position.

We gradually learn that Amanda and Lily were best friends before the incident which turned Amanda into something of a pariah at school and in the community. Amanda was absent for sometime in the care of various highly paid psychiatrists, but has recently returned to face college entrance exams. Her mother (Kaili Vernoff) has secretly paid Lily (Anya Taylor-Joy) to help the fiendishly intelligent Amanda catch up, perhaps socially, more than academically. Amanda, who shows much more interest in getting under Lily’s skin than in learning anything sends Lily a loaded message: ‘I’m better at applied skills’.

Lily appears increasingly uncomfortable listening to Amanda’s blunt and uninhibited outlook on life and theories, but also fascinated when she admits – or boasts – that she does not have any feelings. Sometimes I feel hungry and tired’, but I have to trick myself into feeling happy or sad.’ This doesn’t make her a bad person. ‘It just means I have to try harder than everyone else,’ Amanda confesses and gives Lily a demonstration on how she has learned to cry on cue.

At first Lily seems shocked and threatens to call a hasty end to the tutorial, particularly after Amanda confronts Lily about her being paid by Amanda’s mother.

But as the camera cuts back and forth into a tense, chilling dialogue between the two girls, we realise that this was just the break Lily was waiting for. Lily, too, needs a friend. She has been expelled from her expensive private prep school and her fitness fanatic stepfather Mark (Paul Sparks) is paying for her to go to away to a remedial college. Lily’s appeal to her submissive mother (Francie Swift) leads nowhere.

Unlike Amanda, Lily’s spontaneous emotions are not studied. But with her soft voice, porcelain skin and wide eyes hiding a calculating mind, dark thoughts, and pampered existence, with a little encouragement, she is more than a match for Amanda. She has something Amanda lacks: a sense of entitlement and self-worth.

Every time Lily hears the rowing machine upstairs in his bedroom, Lily’s anger builds as she is reminded of this oppressive intruder (who is nonetheless keeping her in luxury) and Amanda cannot help but notice. While opening an expensive bottle in Mark’s wine cellar Amanda suddenly asks, “Do you ever think about just killing him?” This is one step too far, and Lily cannot countenance the deed.

One of Amanda’s mottos is that the only thing worse than being incompetent or unkind is being indecisive. Having ruminated on the seed planted in her mind, Lily questions Amanda about the practical elements in a cold-blooded scene reminiscent of Alfred Hitchcock’s Rope, and Strangers on a Train.

begins as a tense two-hander, the introduction of the late Anton Yelchin (to whom the film is dedicated) in his last role before his tragic accident, adds a welcome dimension to the film. The girls are clever, but realise they have to find a detached third party – a burglar, for instance – to do the deed. Amanda has done her homework and presents drug dealer Tim with an offer he can’t refuse. But he tries, protesting that, while working in a menial job, he is on the path to riches. Obviously unimpressed, when Tim tries to back out of the plan, Amanda reminds him that he is a registered sex offender and she can blackmail him.

The dynamic between Tim and Amanda is chilling and opens up the film to ponder the contribution that a privileged life plays in the real world. Older but no wiser than the two girls, Tim finds himself in an unfamiliar world where the moral norms he is accustomed to thwarting are pulled from under him. He is disorientated at the notion that such depravity breeds in the lap of luxury, in a world he can never, despite his boasting, even aspire to. He is not only helpless before these teenagers but humiliated mentally and physically, when Amanda calls his bluff and he falls apart.

After this climactic point, the film loosens its hold and seems to lose its sense of urgency and direction. The denouement is perhaps inevitable and internally consistent, but far from satisfying. Amanda has thrown out the notion that Tim’s life is not worth living and Lily, in her rarefied bubble, is fascinated by the idea that there is this hierarchy. As the tutor turns tutee, this idea might provide the key to the freedom Lily craves.