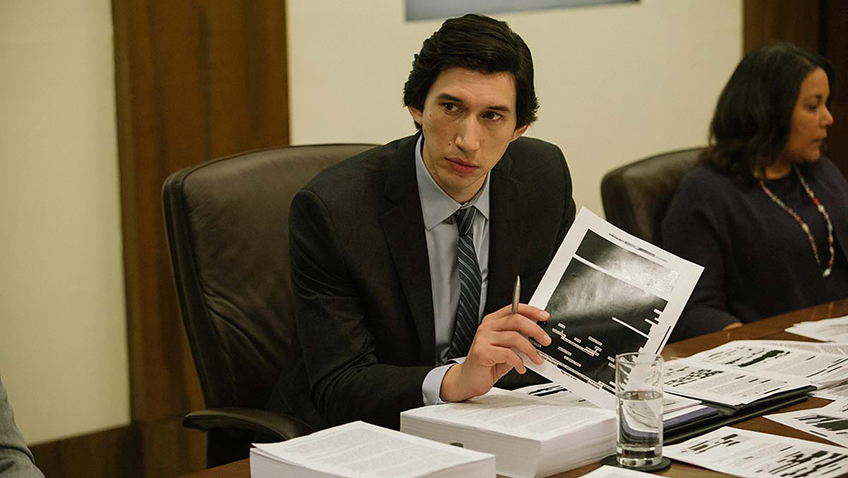 Writer/director Scott Z. Burns, best known as the scriptwriter of The Informant!, The Bourne Ultimatum, Side Effects, Contagion and the upcoming Bond film, No Time to Die, has the credentials to make a feature film about transparency and accountability. Or, more specifically, about the cover-up exposed by the Senate Intelligence Committee’s Report on CIA torture in the wake of 9/11. His previous feature as director was 2006’s PU-239 in which contaminated employee Timofey, is accused of sabotage and sacked with no pay from his job in a Russian top-secret nuclear reprocessing plant for trying to investigate the cause of his impending death. In The Report, real-life government researcher Daniel Jones (Adam Driver) is not given days to live, but his government does try to destroy his life for doing his job. 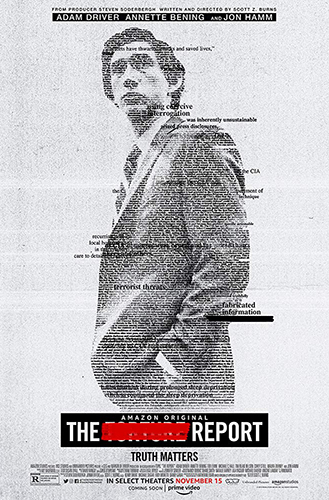 Principled, confident and enthusiastic Jones is on Capital Hill looking for a job in national security. Denis McDonough (Jon Hamm) advises him to get “some real-world experience and then come back”. It is uncertain to what extent he feels that his new job in a windowless basement bunker with computers, but no printers or copy machines, is real-world experience. But after seven years, Dan is credited with having compiled the largest investigation in U.S. Senate history (at 6,700 pages with over 38,000 footnotes) and having uncovered one of the darkest blots on America’s reputation.

This was not like most investigations, and nor is this like other films about real life investigative reporting such as Spotlight, The Insider or All the President’s Men. In 2009 The Senate Intelligence Committee were given a summary of cables that described the interrogations of Abu Zubaydah (Zuhdi Boueri) and Khalid Sheikh Mohammed (Ratnesh Dubey) credited with being the mastermind of 9/11. But the CIA had destroyed its interrogation videotapes and so the Committee, headed by Diane Feinstein (Annette Bening) vote to broaden its investigation.

Jones and his small staff (all of whom, in the film at least, quit long before the end of the project) are given access to CIA cables and reports but are not allowed to speak with any of the CIA staff. This limits Burns as a dramatist as much as it did Jones’. In the first half hour we are bombarded with so many names and so much expositional dialogue that it feels more like exam preparation at school than a movie.

Unlike last year’s The Post or the more recent Official Secrets, Burns does not want to distract us with scenes of Feinstein’s or Jones’ private lives so there is no romance, dinner parties and no family arguments about working 24/7. Jones does not race anywhere against the clock and he only gets out to meet with people a few times in the film, although these encounters have a certain tension. 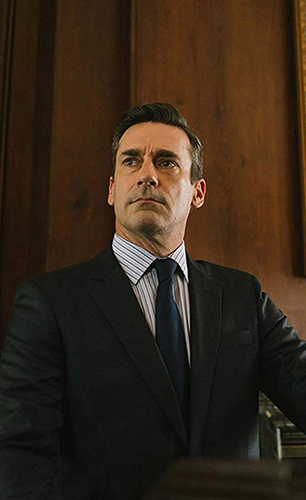 Jon Hamm in The Report

We are privy to dramatisations of what Jones and his staff uncover, namely the CIA’s discussions about how they could hide prisoners away in colour-coded secret detention centres and interpret the prohibition on torture in such a way that they could in fact starve, freeze, deprive of sleep, bombard with noise generators 24/7, subject to mock burials and waterboard the prisoners without calling it torture.

The film picks up pace when Jones discovers the CIA’s “enhanced interrogation techniques” (EIT) which are gruesomely familiar. The EIT is a euphemism so extreme, that it leads to a bit of black humour in the film when we are introduced to the clowns who came up with the idea.

The film is based in part on Kathryn Eban’s 2007 Vanity Fair article Rorschach and Awe (she also published: The Psychologists Who Taught the C.I.A. How to Torture and Charged $180 Million). Jones learns that the FBI, by treating Zubaydah humanely and establishing a rapport, extracted useful information. Not to be outdone, the fiercely competitive CIA arrive dressed in black uniforms and masks and commence a counterproductive strategy of destroying Zubaydah’s sense of personality and frightening him into saying anything.

These “alternative tactics” were proposed by two psychologists paid royally by the CIA: James Elmer Mitchell (Douglas Hodge) and his colleague Bruce Jessen (T. Ryder Smith). They do not speak Arabic, are not members of the American Psychological Association and have never interrogated prisoners of any sort. Instead, they recommend that the CIA reverse engineer a military training program known as SERE—for Survival, Evasion, Resistance, Escape—which trains US soldiers to endure captivity in enemy hands.

You long for Mitchell and Jessen to have a film of their own written and directed by the Coen Brothers and starring Brad Pitt and Matt Damon, but Burns gives us a sobering docu-drama instead.

Jones learns, and we witness how the CIA’s director George Tenet (Dominic Fumusa) provided inaccurate and misleading information to members of the U.S. Congress, the White House and the Director of National Intelligence about the program’s effectiveness and the number of prisoners involved. CIA head John Brennan (Ted Levine) is portrayed as a complicit, uncooperative supporter of enhanced interrogation, but went on to serve as President Obama’s chief counter-terrorism advisor, a position that did not require Senate ratification. 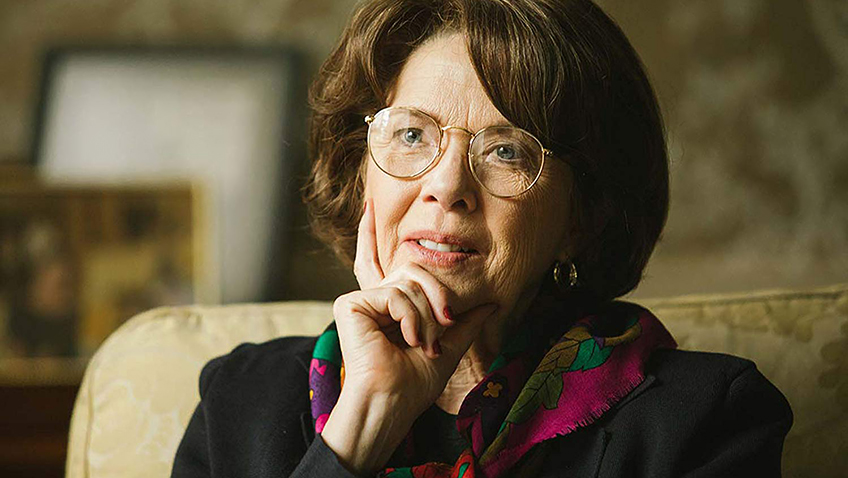 Annette Bening in The Report

As Jones gets too close to the truth his “office” is illegally broken into and his computer is hacked by the CIA who frame him for stealing CIA information. Jones consults a lawyer who tells him that the CIA are doing this to discredit him and bleed him dry financially. But he doesn’t need a lawyer; he needs “to get out more”. This is code for think about who can help you and talk to the press.

What distinguishes this story from so many others is that Jones makes a dramatic decision not to be a whistle blower, but to rely on the “system” to out the truth. It’s a strategy that only works because of the courage and stamina of Senator Diane Feinstein, admirably played by Bening and arguably the film’s real hero. In real life Feinstein has paid generous tribute to Jones (who left the government after the Report was published and now runs his own investigative research and consulting business).

Another hero is the late Republican Senator John McCain who appears as himself at the end in archival footage. His dignified speech might bring a tear to your eye in light of the bullying and insulting accusations he was subjected to (and still is) from President Trump. Commenting on the importance of publishing the report, McCain reminds the world that “our enemies act without a conscience, but we do not”.