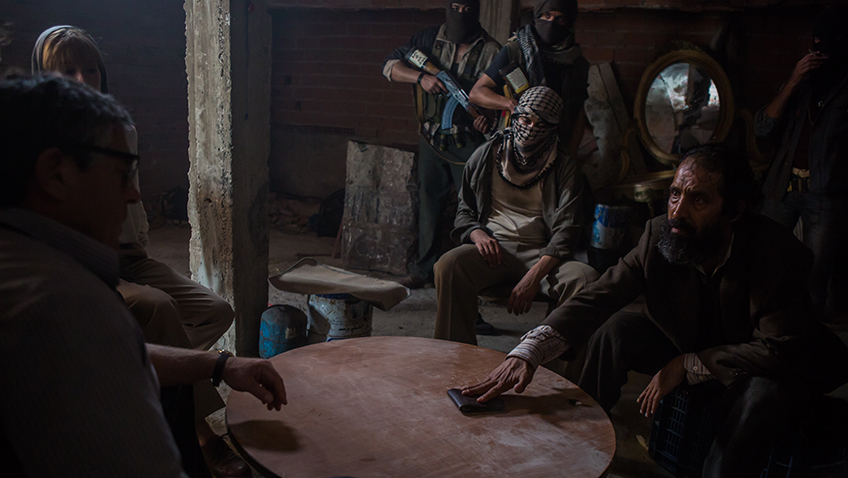 When you see a political thriller set in 1970’s Beirut and Tony Gilroy’s name on the marquee as scriptwriter, you buy your ticket no questions asked. Gilroy injected more tension in the mother-daughter relationship movie Dolores Claiborne than there was in the last Mission: Impossible, before he reintroduced romance into the hitman/spy genre with one of the greatest characters of the millennium: Jason Bourne. While the Bourne series cornered the market for years in the political thriller/ action genres, Gilroy’s more sedate, but hardly less exciting legal drama, Michael Clayton, was nominated for an Academy Award as Best Film and Best Screenplay.

, directed by Brad Anderson (The Machinist, Next Stop, Wonderland) and starring John Hamm and Rosamund Pike (last seen armed, multi-lingual and in the Middle East in Entebbe is Gilroy’s second hostage drama, following Proof of Life. In that film, Russell Crowe played a hostage negotiator who steps in to save a businessman when his very attractive, lonely wife discovers they have no kidnapping insurance.

Here the situation is a lot more complex and Mason Skiles is less of an expert in hostage situations and more of a mid-level diplomat who spends a lot of time asking something Russell Crowe never would: ‘what the f***is going on? You might well ask that question a few times in the film, too, primarily if you have been dozing and your night vision is not particularly good.

In 1972 Beirut, US Diplomat Stiles and his wife Nadia (Leila Bekhti) are throwing a cocktail party on the veranda of his grace-and-favour villa where they have taken in a 13-year-old orphaned refugee named Karim (Yoav Sadian). They are also celebrating Karim’s success with is exams and the bright future that now lies ahead. But Stiles has been fooled. When his best friend, CIA agent Cal Riley (Mark Pellegrino) arrives at the party, he brings upsetting news.

Karim is not all alone in the world: his older brother Abu Rajal (Hichame Ouraqa) is a Palestinian terrorist (linked to the Munich Olympics) and, as it happens, is coming to reclaim his brother before the approaching Mossad Agents take the boy away for questioning. As Stiles tries to prevent this with Cal close at hand, the terrorists and the Israeli’s exchange gunfire, with tragic results. 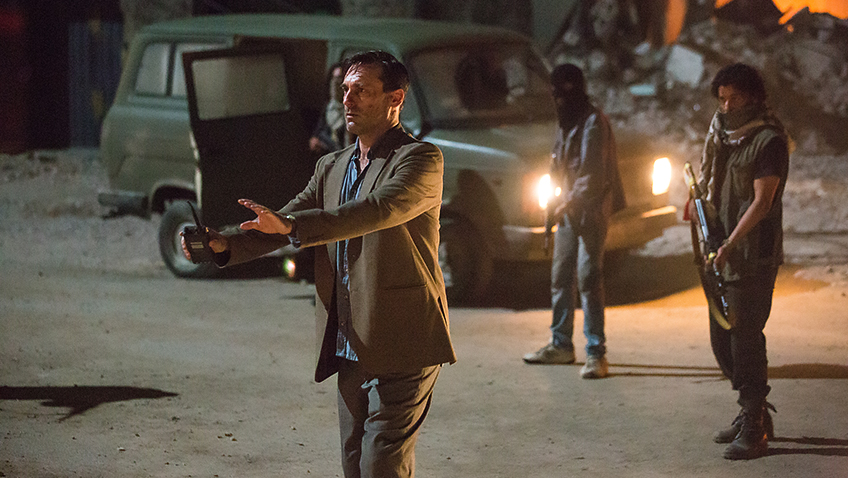 Jon Hamm in The Negotiator

Ten years later we see Stiles, now working for himself as a labour mediator in Boston, remaining calm when the union and management representatives are ready to tear up the deal. He is staying in a seedy motel with booze as his only companion. When his partner tells him that he is taking a more lucrative job offer in New York, Stiles goes off to a bar to take stock.

But he need not bother because, just in the nick of time, a vaguely-recalled acquaintance joins him with a proposition that he is in no position to turn down. He is offered $6,500 in cash and a first class ticket to stand in for a University lecturer at the American University in Beirut – the last place on earth he wants to see again.

When Stiles arrives to see the city he loved in ruins after the civil war, he discovers the real reason for this trip. His liaison, Sandy Crowder (Pike), a CIA Field Agent identifying herself as the Deputy Cultural Attaché, is giving nothing away. But when he finds himself in a top level meeting with, as he puts it, two spies (CIA), the White House (State Department) and the Ambassador (Dean Norris, Shea Whigham and Larry Pine) he knows enough to ask, ‘can anyone tell me what I am doing here?’ 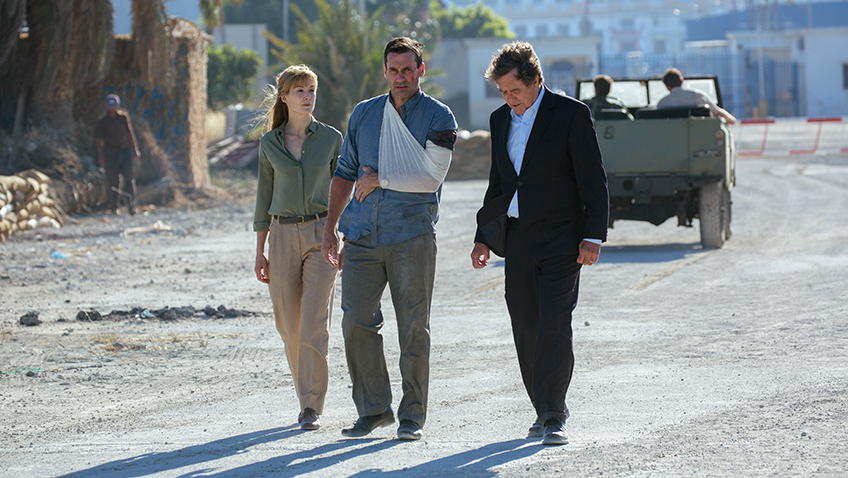 Jon Hamm and Rosamund Pike in The Negotiator

They tell him what he needs to know. Cal Riley, whom he has not seen in ten years, and who has remained in Lebanon – out of guilt for the 1972 tragedy his wife surmises – has been abducted. What is truly bizarre is that kidnappers have demanded that Mason Stiles be the negotiator or no one will ever see Riley again.

Gilroy is a master of the complex plot and, as he places the action between the Munich Oylmpic massacre on the one end and the Israeli invasion of Beirut and the siege of the American Embassy under Ronald Reagan on the other, he sets out to show just how complex the Middle East had become. Even back in 1972 when a relatively confident, optimistic Gilroy discusses the challenges of the area to guests, he explains: ‘The PLO say it’s the Amal militia. The Amal militia say it’s the Christian militia. The Christian militia say it’s the Druze and the Druze say it’s the Syrian army.’

But the enemy is not always Arabic speaking or Muslim. As Mason discovers, you have to watch your back when mixed up with jaded or small minded government officials who cannot see the bigger picture. It might be a cliché that Sandy goes rogue with Mason (as all American heroes seem to do nowadays), but she sees that Mason is far more intelligent (and good looking) than anyone back in the CIA.

There is nothing wrong with the plot, which is, in some ways, plausible, but it requires a lot of expository dialogue, meetings and a succession of events and locations that sometimes appear random. While Hamm puts in a solid performance and thoroughly credible in the role, unlike Michael Clayton or the Bourne films, there is a surprising lack of tension in the action. The middle part of the film gets bogged down by its own busyness and you might find caring a lot less than you should.