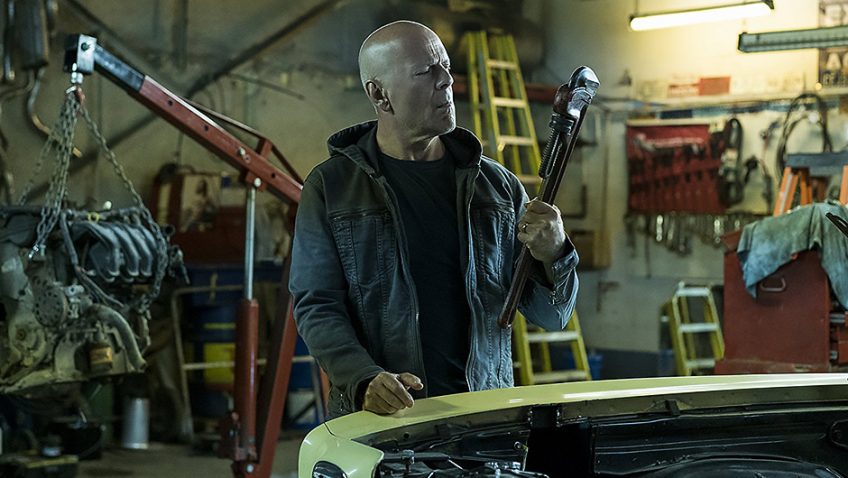 If Eli Roth isn’t a familiar name as the producer/director of the horror film Hostel and its sequel, he might be known to you as the actor who played ‘The Bear Jew’ in Quentin Tarantino’s WWII film Inglorious Bastards. And if that, too, draws a blank, meet Eli Roth, the man who decided it was a good time to ‘reimage’ Michael Winner’s 1974 vigilante movie, Death Wish

, based on the book by Brian Garfield

. In all fairness to Roth and scriptwriter Joe Carnahan (Smokin’ Aces, Narc), it’s not just the recent massacre at the Marjory Stoneman Douglas High School in Florida. With mass shootings occurring on a regular basis in the USA there are not many opportune slots for a film that can be construed as a NRA rallying cry.

In the original Death Wish Charles Bronson, then 53, plays Paul Kersey, an architect- turned-vigilante following a home invasion in which his wife is murdered and his daughter is left for dead with a fractured skull. In Roth’s Death Wish

Willis, who once had one of the most expressive faces in Hollywood: playful, mischievous, sardonic and sexy – looks like he is embalmed in plaster and bloated with foam. Yet after the mysterious murders of several notorious bad guys by a hooded super hero, witnesses report seeing a man, ‘in his thirties’ or, later in the film, ‘in his forties or fifties.’

The man in the hood is, of course, Dr Paul, who patiently watches the detective team assigned to the case – Detective Kevin Raines (Dean Norris) and Detective Leonore Jackson (Kimberly Elise) – dutifully follow procedures while swamped with other cases and limited resources. He alternates between meetings with the police and visits to his daughter lying motionless and unresponsive in a hospital bed. 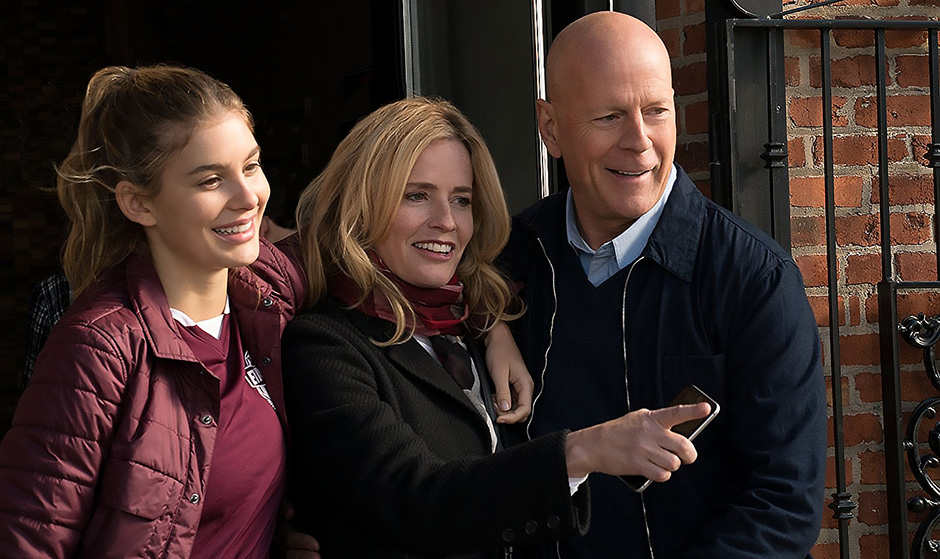 The turning-point comes when Paul visits his father-in-law on his farm where Lucy wanted to be buried. When the father-in-law spots a poacher, he pulls out his rifle to shoot them. For Lucy’s dad, the problem is that ‘people rely on the police’.

This being 2018, you might think that Roth, who speaks four languages, and was brought up in a wealthy Boston suburb by a professor at Harvard Medical School and an artist, would turn the Death Wish franchise into an anti-gun statement. Or anything that acknowledges the long list of children and teachers murdered by guns rampages since 1974’s Death Wish.

But when Roth takes us into a gun shop to show us how easy it is to buy a gun, he casts a young, pretty blond named Bethany (Kirby Bliss Blanton) with a fetching cleavage and a winning smile as the sales person. (She is named after Bethany: the town at the foot of the Mount of Olives where Jesus stayed during Holy Week before his crucifixion). It’s hard to tell if she is flirting with the guns or with Paul, but to cover his tracks, Paul leaves empty handed, telling her that he’ll think about it. 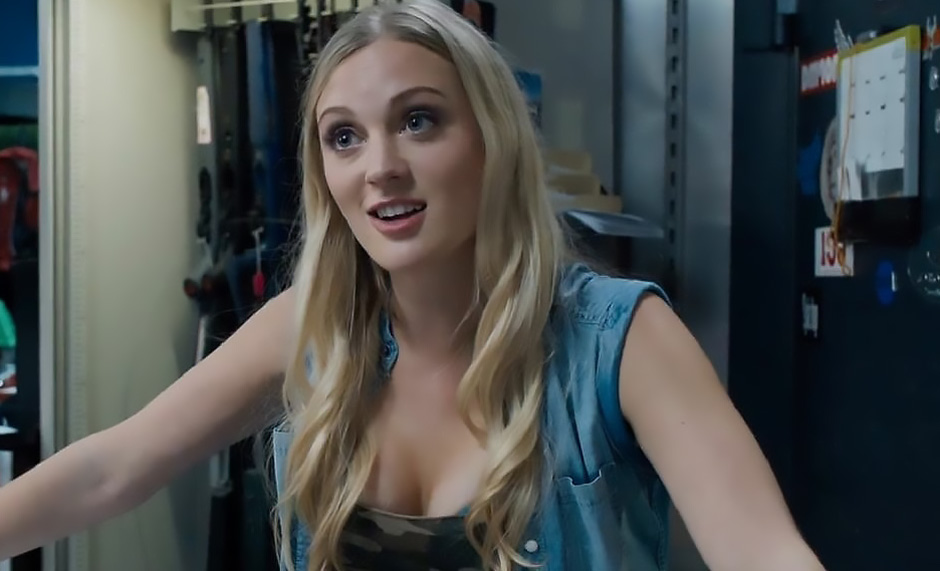 And he does think about it, long and hard. Soon the basement of Paul’s house looks like an arsenal. He even has – this may be a spoiler – a coffee table that opens at the touch of the foot to deliver a rifle. This comes in handy if you are corned in the room and your other guns have been confiscated.

While Paul is looking for the violent thugs who destroyed his family and his life, he is not averse to gunning down similar types to prevent others from dealing with the grief he feels and an overstretched police force. One such candidate is the Ice Cream Man. He uses little children to deliver drugs and does not come to visit them when they end up in the hospital where Paul works. So Paul pays him a house call.

While the hooded super hero is prowling the streets, his latest acts make front page news while lively media debates ensue. There is a mixed reaction, with one black radio announcer asking, ‘is he a hero or a zero? Chicago. Give us a call.’ The debate never gets any deeper than that and never touches on gun control.

The police are also closing in on the vigilante, and come so close that they arrest Kersey’s brother, Frank (the once great actor Vincent D’Onofrio underutilised). Up until his arrest, Frank has no idea, of course, that his brother is the vigilante. If the cops return to Paul’s house, so do the murderers, eager to ensure that no one is left to testify against them. 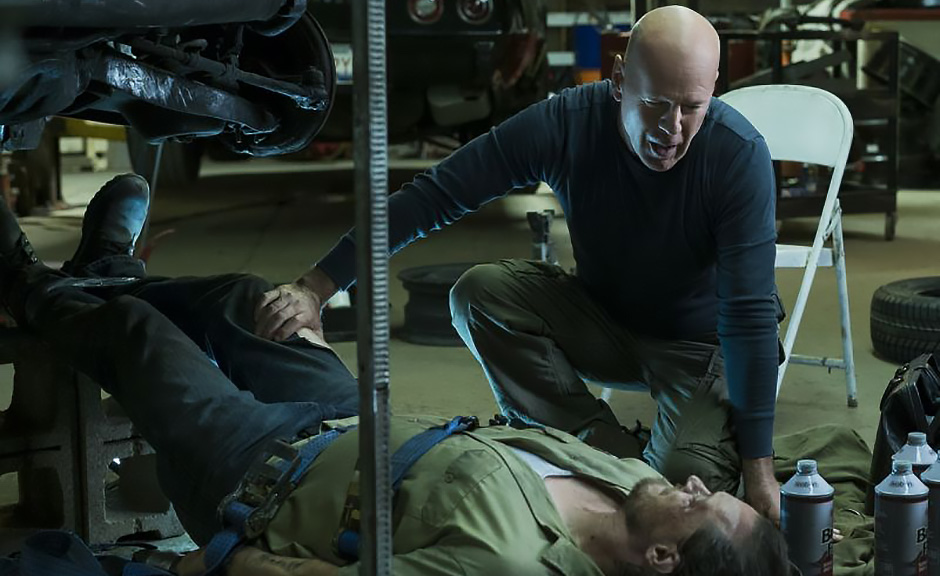 The idea of turning an architect into a doctor might be designed to excuse Paul’s actions on the grounds that he also gives and extends life. And in an ironic early scene, after failing to save a police officer, Paul turns his back on the cop’s aggrieved partner, rushing to operate on the man who killed him. Roth apparently loves the concept as he creates a split screen: on one side Paul is removing a bullet and on the side he is putting one in the centre of a target at target practice.

But seeing Willis in a doctor’s smock only reminds us of that other law-dodging doctor: Harrison Ford’s Dr Richard Kimble in the terrific thriller, The Fugitive.

The moral of the story is that having a few guns and rounds of ammo in the house is a risk free necessary evil, if not a god-given right. The police are not going to press charges because, as Detective Raines sees it, ‘you defended your family just like a man should.’