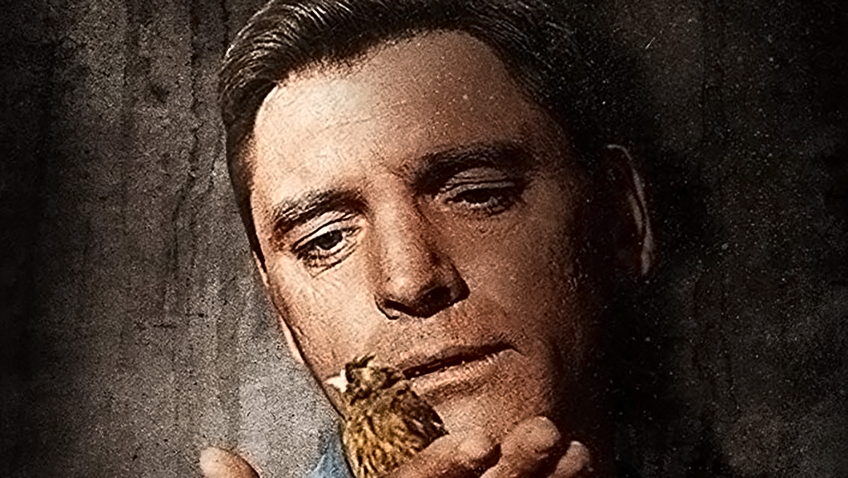 Birdman of Alcatraz (Eureka). In 1916 Robert Stroud is convicted of two murders. He spends 54 years in a maximum security prison, 42 of them in solitary confinement. He succours a sparrow and turns his cell into an aviary which at one time houses 300 canaries. He invents a medicine for his sick birds and publishes a book, becoming the world’s foremost authority on bird diseases. The film, directed by John Frankenheimer, is a stolid documentary tribute to his talent and resilience. It is also a plea for his parole (which was never granted). Burt Lancaster is Stroud. Karl Malden is the warden. Thelma Ritter is his ma. Neville Brand is his guard. The sharp black and white photography is by Burnett Guffey. In an attempt to liven up an essentially static film, a prison riot, which has nothing to do with Stroud, is added at the end.

Flesh & Blood (Eureka) was a big box-office failure in 1985 but, in the way bad films often do, it has developed a cult following since then. The setting is Western Europe in 1501. Rival mercenaries siege, battle, pillage, rape, torture and have a bloody good time. There is also a bubonic plague, nudity and sex in a bath tub. Paul Verhoeven’s film, now fully uncut, is a lot of medieval rubbish, bawdy, violent, crude, absurd. The dialogue is laughable. The acting is terrible. Jennifer Jason Leigh has to choose between Rutger Hauer and Tom Burlinson. She enjoys being raped by Hauer so much that she decides to rape him. In an interview screenwriter Gerard Soeteman talks a lot of nonsense about how the characters were inspired by Hitler and 20th century fascism.

Bagdad Cafe (StudioCanal). This strange film, directed by Percy Adlon, was released in 1985. Marianne Sägebrecht is so odd that at first I thought I was watching a male drag artiste. She is cast as an overweight middle-aged Bavarian hausfrau who walks out on her husband whilst they are holidaying in the Arizonian desert. She finds a filthy, rundown motel, which is run by an abrasive black woman (CCH Pounder), and turns it around with a much-needed clean-up and a bit of amateur magic and a bit of amateur cabaret. The film isn’t over until the fat lady sings and the racial hostility between the two women turns to friendship and love.