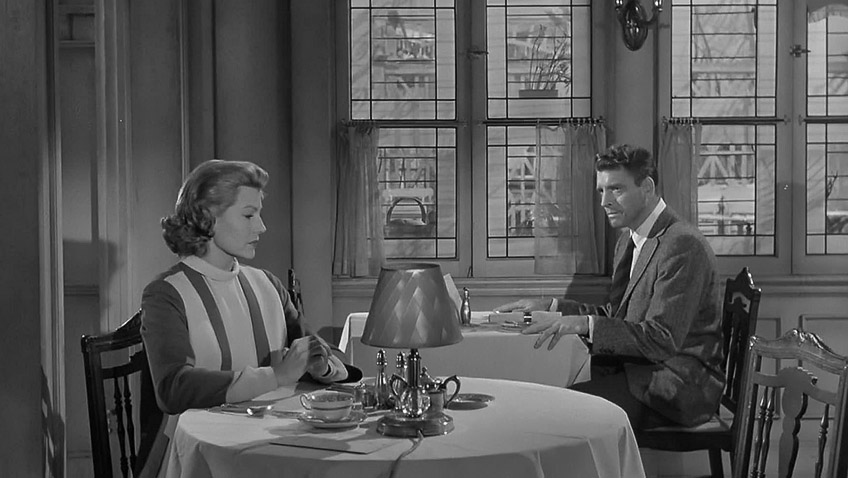 Terence Rattigan did not care for this film version

Seperate Tables (BFI) is two one-act plays by Terence Rattigan written in 1954 and set in the same genteel Bournemouth hotel with the same supporting cast. The two leading actors play wildly different characters, and were a showcase for the versatility of Eric Portman and Margaret Leighton. The 1958 film version, which is very stagey and wooden, has four actors playing the four roles. Rita Hayworth and Burt Lancaster don’t look at ease in their roles of ex-lovers. David Raskin’s singularly unsubtle musical score would be more appropriate for a film noir. The better story-line is the one about a bogus major, who lies about his non-existent exploits during the war. He is arrested for importuning women in a cinema. (In the original text he was importuning men but this version was not acted for 40 years.) David Niven, unexpectedly cast, won an Oscar. Deborah Kerr played the gauche, crushed daughter of a monstrous mother (Gladys Cooper). Wendy Hiller won an Oscar for her understated performance as the hotel manager.

Entebbe (Entertainment One). In 1976 Palestinian terrorists hi-jacked a French plane and took 248 hostages. They did not release the Jewish passengers. The pressure on Israeli PM Rabin to do something was enormous but Israeli had a policy of non-negotiation with terrorists. The story has been filmed many times. This time the emphasis is on two idealistic German terrorists (Rosamund Pike and Daniel Brühl) and the raid is seen from their perspective. The script is clunky and José Padilha’s direction is painfully slow. The actors are dull. Worse still, the actual raid, one of the most famous and daring raids ever, is downplayed and lacks any excitement. 42 years on the Jewish policy of not negotiating with Palestinians continues.

The Producers (StudioCanal). Mel Brooks, who is 92 years old and still with us, made his debut as a film director in 1968 with this farce, a manic camp Broadway musical spoof. It is very broad and gets broader as it goes on. Two New York producers (Zero Mostel, extremely broad, and Gene Wilder extremely hysterical), realising there is far more money to be had in staging a flop than a hit, mount the worst musical ever written. It’s called Springtime for Hitler and it is a ridiculously gay romp about Adolf and Eva Braun, written by a crazy Nazi. High spots include auditions for the role of Hitler and the gob-smacking bad taste of goose-stepping chorus boys and girls getting into swastika formations, a parody of a Busby Berkeley number. Brooks turned this modest cult movie into a huge Broadway musical success in 2001.