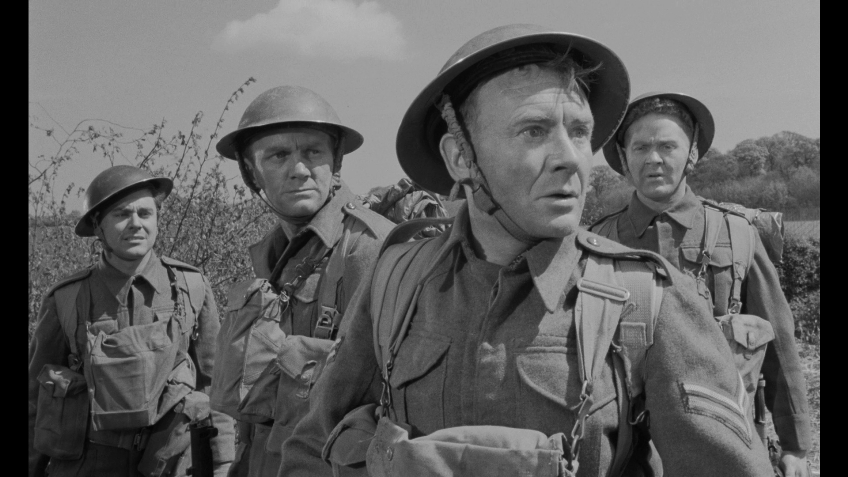 DUNKIRK (BBC iPlayer) is conscientious and sincere but lacks the passion and anger which had informed such masterpieces as All Quiet on the Western Front and Paths of Glory. The inherent weakness in the script was to tell the story of the epic evacuation (Britain’s Finest Hour) through just three individuals: an embittered journalist (Bernard Lee), a garage owner (Richard Attenborough) and a reluctant corporal (John Mills). The production was not sufficiently epic. There were not enough men and certainly not enough boats. The film was at its best on the beaches: the bullets ripping through the sand, the hurried prayers, the soldiers waiting patiently in the water being picked off by enemy aircraft.

FORT APACHE (BBC iPlayer). Classic Western, sympathetic to the Native Americans, directed by John Ford and starring John Wayne. The magnificent location, Mountain Valley, and the exciting hard-riding action, are brilliantly photographed in black and white by Archie Stout. There’s also romance between 17-year-old Shirley Temple and John Agar. (They married in real life.) There’s a stately military ball and broad humour from Victor McLanglen. Henry Fonda is the martinet who fatally underestimates Cochise, leader of the Apache, and the US cavalry, outnumbered 4 to 1, is massacred, a reference to Custer’s Last Stand, The Battle at Little Bighorn in 1876.

FUTTOCKS END and OTHER STORIES (Network) Silent British comedy from the 1970s. No dialogue. Only sound effects. Slapstick jokes about a weekend at a country house are performed by Ronald Barker, Michael Hordern and Roger Livesey. Other Stories include jokes about building a house (A Home of Our Own) with lots of well-known faces in cameo roles; Brits holidaying abroad (San Ferry Ann), the wittiest thing is the title; and a non-slapstick mystery car chase (Vive Le Sport). The jokes are laboured hit and misses. All four comedies would benefit from cutting.

JUST LIKE A WOMAN (Network) is a poor British comedy which dates from 1967. Francis Matthews and Wendy Craig do their sit-com best as a television couple who quarrel and separate; but the script is all over the place and clearly doesn’t know where it is going. John Wood, badly miscast, would go on to have a distinguished career with the RSC and create key roles for Tom Stoppard.

BLAZING SADDLES (BBC IPlayer). Mel Brooks’ 1974 crude spoof of the Western genre and racism was hugely successful at the box office but it’s not in the same class as The Producers, Brooks’ satire on show business. The script has its funny moments but not nearly enough of them. Cleavon Little is cast as a black sheriff. Gene Wilder is poorly served. The high spot is Madeline Kahn’s spot-on send-up of Marlene Dietrich.