Home / LIFESTYLE / REVIEWS > / FILM REVIEWS / You’ll be having too much fun (with Mads Mikkelsen) to realise this crowd pleaser is running on empty. 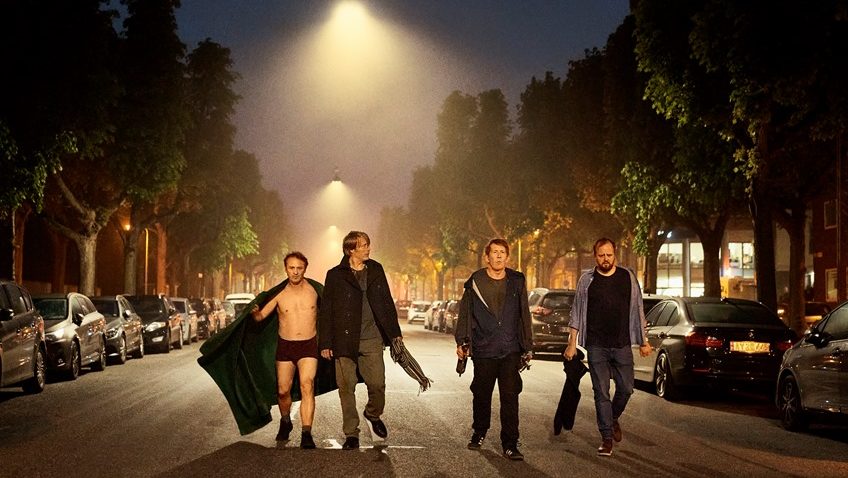 You’ll be having too much fun (with Mads Mikkelsen) to realise this crowd pleaser is running on empty.

After falling for Mikkelsen as the unflappable code-named Citron in Nazi occupied Denmark in the 2008 historic drama, Flame & Citron, he is my hero. This month he appears in two tragicomedies, Another Round and Riders of Justice where he is very much the anti-hero. In each he plays a failed father in a rut who has lost his ability to communicate and to feel. In Academy Award winning Another Round Mikkelsen reunites with Dogma director Thomas Vinterberg and co-writer Tobias Lindholm from The Hunt, where Mikkelsen also played a teacher in jeopardy.

With its provocative, crowd-pleasing premise, Another Round, sets itself up for a fall by asking whether booze is the secret to self-realisation. Friends and colleagues Martin (Mikkelsen), Nikolaj (Magnus Millang) Tommy (Thomas Bo Larsen), and Peter (Lars Ranthe) have been teaching at the same Copenhagen high school so long that inertia has set in, making them as boring to their students as they are bored with life. To say frumpily dressed, sleepy-eyed, fiftyish history teacher Martin, with a permanent two-day-growth and a golden lock of hair over one eye is unfocused and unengaging in the classroom is an understatement.

And Martin is shocked at the realisation that he cannot coast indefinitely. He is facing a humiliating rebellion from students and parents concerned about final exams. He cannot continue to blame everything on the student’s addiction to their phones. His grading, not to mention his ability to prepare the students, is causing anxiety.

The listlessness and indifference are not confined to Martin’s professional life. His attractive wife Trine (Maria Bonnevie) has started working night shifts and, we later learn, there is more to this choice of shift than a financial bonus. Nor does Martin have anything to say to his two adolescent sons who never look up from the TV and their phones when he tells them their mother is working, he’s going out to dinner with friends and there’s pizza in the fridge, the extent of his conversation.

Twelve years ago, he and Trine were the golden couple, and Martin, with a grant for a PhD, was the brilliant, star teacher, voted most likely to succeed. ‘What you lack is self-confidence,’ is Nikolaj’s diagnosis at his boozy 40th birthday party where Martin, shaken by the students, is not drinking. With the other three on board, Nikolaj eventually persuades Martin to drink his way out of middle-aged lethargy – as a strictly “scientific” experiment, of course. He proposes testing Norwegian psychiatrist Finn Skårderud’s theory that humans are born with a blood alcohol content that is 0.05% too low. They decide to drink regularly until 8PM (emulating Hemingway) to operate at the optimum level.

Merging form and content, in the first half of the film Vinterberg immerses us in a vicarious high, as the exuberant, excited friends turn their classes around with renewed vigour and Martin takes his delighted family on their first canoeing holiday in years. He and Trine make love and both whisper that it’s been too long.

Martin, who was once known for his jazz ballet dancing, now entertains his appreciative class with creative, hilarious history lessons, most of which demonstrate that the leaders who drank like fish were the victors. We also follow the trajectory of Martin’s three colleagues as they excel in teaching, and improve on their popularity, with their open, engaged and creative approaches to teaching.

But the optimum blood alcohol level is quickly surpassed by round the clock drinking, as the friends break their own rules and soon stop entering their findings and results in the logbook, the basis of their scientific experiment. Inevitably, the men lack the discipline of moderation, and we have to watch four drunks self-destruct for quite some time, in one case, with tragic consequences.

And yet we cheer when, at Peter’s suggestion an apprehensive student who freezes at exams, but wants to be a medical student, passes his oral exam with dutch courage. You have to wonder whether he will resort to the same help before a complex operation in hospital.

In the opening scene, we watch students drinking, running and vomiting (despite a penalty for that) in the Lake Race, an excuse for drinking that has consequence in the wider community and is discussed by the school principal. In the closing scene, this same class is celebrating graduation with more binge drinking as they head to the waterfront for a rave.

Martin is there, hugged by his students for getting them through, and, once again, even after the failure of the experiment and the personal lessons learnt (which would be a spoiler to disclose) is hitting the bottle as hard as his students. Vinterberg never explains this ending or what he is saying about middle-aged professional men (and perhaps women). Is Martin (and his friends) going through a mid-life crisis, or has he realised he cannot be himself without booze?

And though this last comment comes with a spoiler alert warning, it goes to the essence of the film and what might trouble us about it. For one might well ask what is the point of the film if a long-awaited text message from Trine is not enough for Martin to burst into an uninhibited dance? Why does he still need a revolting amount of alcohol, consumed with the jubilant students to text back with a smile of relief on his face? If the point is to give Mikkelsen a meaty role to dazzle us with his richly nuanced range of emotions and physical prowess, Another Round succeeds brilliantly.