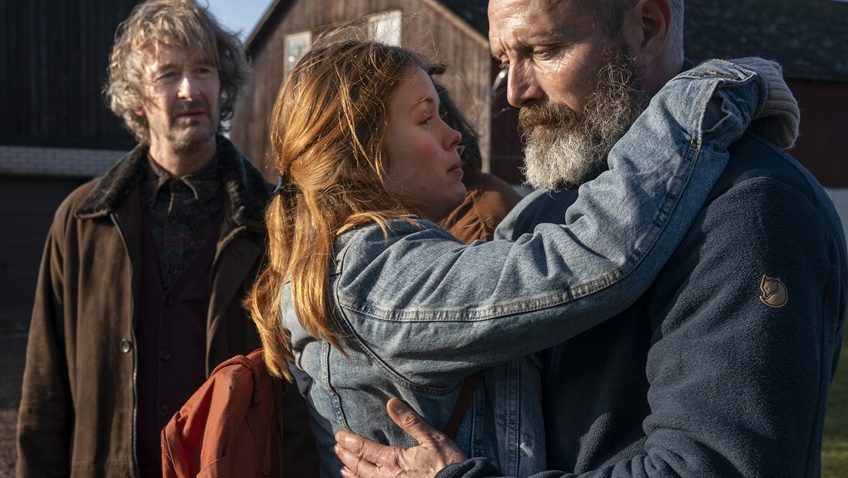 Fresh, fun and thought-provoking, Mads Mikkelsen is the nucleus of this ensemble comedy-action thriller

Every now and then a film with a cheesy title and not much hype comes along like a breath of fresh air, offering us a something original, fun and thought-provoking – particularly rare among summer releases. Such a film is Riders of Justice, which opens with the theft of a bicycle, an intended Christmas gift. Over the course of the story this inconsequential prologue unleashes a series of incidents that stretch the boundaries of cause and effect, statistical probability, God’s will or, what many of us call coincidence.

In his fifth collaboration with director and prolific scriptwriter (After the Wedding, Men & Chicken, Green Butchers, Flickering Lights), Anders Thomas Jensen, Mads Mikkelsen (Another Round) plays deployed military commando Markus, who can only feel one emotion: anger and knows only one command: attack. When he is called back from an overseas’ hotspot to Denmark by the news that his wife, Emma (Anne Birgitte Lind) was killed in a train crash, that anger is infused with vengeance.

Markus is so helpless and emotionally blocked that he cannot comfort his surviving teenage daughter, Mathilde (Andrea Heick Gadeberg) and to the astonishment of Mathilde’s boyfriend, stubbornly refuses trauma counselling for either of them.

But Markus knows exactly how to react when a team of three, bickering statistical geeks, led by pot-belled, unkempt, probability theorist, Otto (Nikolaj Lie Kaas), pays him a visit with evidence that the crash might not be accidental.

In one of those delectable coincidences that wind through this wry film, but are only coincidences in retrospect, Otto is on the same train as Markus’ family. He gives up his seat to Emma, a gentlemanly gesture that saves his life, but costs Emma hers. For as Otto later pieces together, the targeted blast or collision was on the side of the train where witness for the prosecution in a murder trial, gang member Johan “Eagle” Ulrichsen and his lawyer were seated. Emma was collateral damage.

And had he not been sacked for presenting a hilariously, useless, but accurate algorithm to predict car sales to outraged clients, he would not have been on that train. Nor would he have gone to the hospital where he glimpses Mathilde’s tears and catches her eye.

Television news broadcasts run throughout this film and are naturally of interest to Otto’s inquisitive mind. Police have ruled out a terrorist plot and believe the accident was caused by two colliding trains. In a hilarious scene, Otto, who informs the police that he’s worked in statistical data and probability for 26 years, attempts to persuade the two cynical, wary detectives that there are too many indications that this was not an accident. He describes the suspicious behaviour of a man who left the train just before the explosion. Who buys an expensive drink and dumps it in the rubbish bin before leaving the train without having consumed it?

If the police are not impressed, Markus is working on a lower probative threshold. He takes charge, mobilising the geeks to help him revenge his wife’s murder. From here on in, Mikkelsen is reprising his vengeful husband role in The Salvation, but with his shaven head, ugly, long, beard, and psychopathic personality, he is the monster in need of salvation.

While the bloodshed and the body count rise, Riders of Justice is far removed from Death Wish and Taken. Thomas Jensen surrounds the taciturn fortress that is Markus with a motley band of characters who complement one another in ways which even they do not recognise until the very end.

Foul-mouthed, obese Emmenthaler (Nicolas Bro) an expert computer hacker, and lanky, well-meaning, bungler Lennart (Lars Brygmann) help Otto identify that suspicious man on the train after police dismiss Otto as a weirdo. The suspect, Palle Olesen (Omar Shargawi), – significantly, a former railway engineer – is the brother of Kurt Olesen (Roland Møller), President of the terrorist gang, Riders of Justice. With the sole witness on the train eliminated, Palle could save his brother from conviction. Armed with this ammunition Markus brushes past Emmenthaler’s complaints about statistical accuracy and his makeshift computer set up.

The comedy in this ultra-violent film is so dark, you might not laugh. But you will be entertained. Along with the fiendish plot with its tricks of fate, what makes Riders of Justice so compelling are the characters: an Elmore Leonard cornucopia of misfits who form an unlikely family.

Kindly, warm Otto, with his “retarded arm” is so unlike Markus on the surface that he forms a bond with Mathilde. But Otto holds a secret that, along with his ugly beard, links him to Markus when, after years of self-punishment, he finally opens up. And then there’s Palle’s trafficked, Ukrainian sex slave, Bohashka (Gustav Lindh), who, liberated in Markus’s carnage, repays the unintentional gesture with dividends.