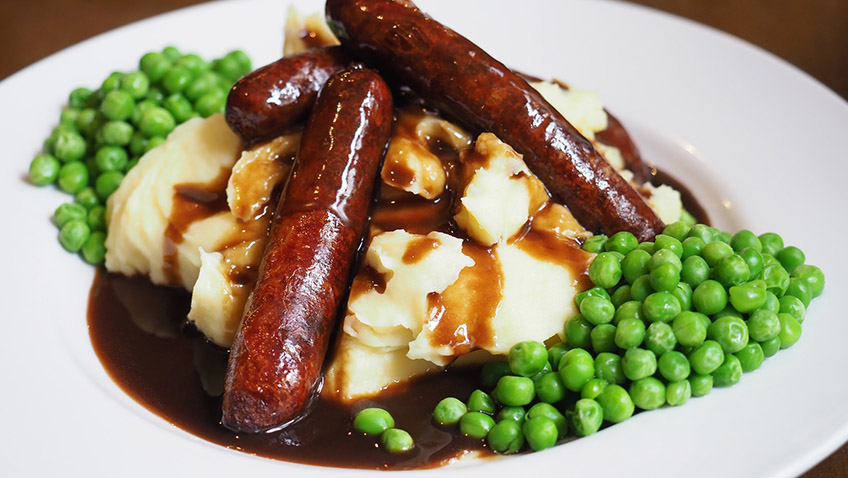 Forget fancy recipes, all a good plain pork sausage requires to accompany it is an extremely large dollop of creamy mashed potato and several glasses of fruity wine. What colour of wine though?

Received wisdom suggests matching red wine with red meat and white wine with white meat and fish. But pork is neither quite red meat or white – being pink coloured when raw and turning an off-white when cooked (or tinged with black if ‘well-done’) – and so it matches both red and white wines equally well.

Drinking a red wine with your sausage can actually make your mouth dry out. The tannins in some red grape varieties draw the moisture out of your gums, but adding creamy mashed potato to the meal can soften this effect. Proper mashed potato made with boiled potatoes, butter, full-fat milk and a grind of salt and black pepper will smooth down reds made with high tannin grape varieties like Cabernet Sauvignon, Shiraz and Malbec.

Sausage sarnies or a simple meal of fried sausage, egg and mushroom match both Brown Sauce and white wine wonderfully – slightly acidic and lemony-tasting whites from Italy make very sausage-friendly wines. Italian Sauvignon Blancs have enough acidity to cut through any frying fat and tend not to taste so overwhelmingly of gooseberry as many New Zealand versions tend to do.

Surely the British Sausage deserves a British wine? No, definitely not, it deserves something better. British wine is not the same as English wine. English wine is made with fresh grapes grown in English vineyards but British wine is manufactured from imported concentrated grape juice. Its cheapness compared to imported real wine made many over look the rather stale taste during its 1970s heydays.