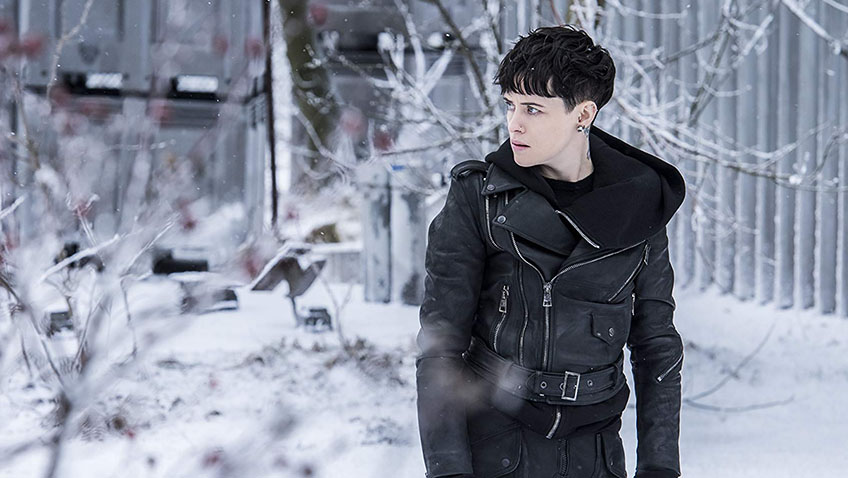 , about a troubled girl named Lisbeth Salander and a journalist named Mikael Blomkvist, left -wing investigative journalist Stieg Larsson became the second bestselling author in the world in 2008 – four years after his untimely death. The books have been turned into successful Swedish (starring Noomi Rapace) and American (starring Rooney Mara) movies, so that it is little surprise that the Swedish publishers commissioned Swedish journalist/author David Lagercrantz to continue The Millennium Series

has been turned into an English language, Euro pudding version entitled The Girl In The Spider’s Web

directed by the Uruguayan director (Don’t Breathe), Fede Alvarez; co written by Alvarez with Jay Basu and the talented Steven Knight, and starring Clare Foy with a slight Swedish accent speaking English! There is a touch of the Bourne series; Marvel super-hero films, and Mercury Rising (in which Bruce Willis must protect a young autistic savant with a valuable key) in the film which will be appealing for those who have never read the books or seen the films. For others, the subtlety, details, the Swedish atmosphere and human idiosyncrasies that made the books and their two central characters so compelling have been whitewashed.

Shot in tones of grey and black, perhaps to reflect the Scandi Noir element of the franchise, the film is a kind of sequel to The Girl with the Dragon Tattoo, but Salander now lives in a large bachelorette pad – or panic room – with customised security mechanisms and escape routes. The only concession to Salander’s bi-sexuality comes in the form of a trans-looking model in Salander’s bed, very much the morning after, so any sex is only implied.

Salander’s concern with privacy is not a vestige from her previous investigative adventures with journalist Mikael Blomkvist (Sverrir Gudnason), but from her main solo occupation as a vigilante for women and children in jeopardy à la Death Wish. It is kind of fun watching the confident, consummate professional burst into the home of an abusive industrialist. His bloody victim is as stunned as the abuser when Salander strings him up by his heels while transferring his bank account to his victim. But in this Super heroine it is hard to recognise the original Lisbeth, a socially detached, unpredictable, victim of abuse who escapes psychological classification.

A prologue refers back to Lisbeth’s childhood with her sister and abusive, criminal father that is a back story barely alluded to in the books or films. As Lisbeth and Camilla, play chess, a spider appears. When daddy interrupts and calls the girls into his bedroom, Lisbeth heads for the window, begging her sister to escape with her. Oddly, the plot turns on Camilla – blond, manicured and stylishly dressed in red, – the complete opposite of her black leather-jacketed, nose ringed, dark, cropped haired sibling – seeking revenge for Lisbeth abandoning her to their father.

But before this showdown, there is a patch of hackneyed plot to get through. Lisbeth receives a phone call from Frans Balder (Stephen Merchant), yet another terminated employee of the National Security Agency (NSA) turned rogue, concerned citizen. He happened to develop a computer program called Firefall, which accesses the world’s nuclear weapon codes (as one does), but now (perhaps with Trump in the White House) he wants it back. And he wants Lisbeth (who must be world famous by now) to help him take back Firefall to keep the world safe. 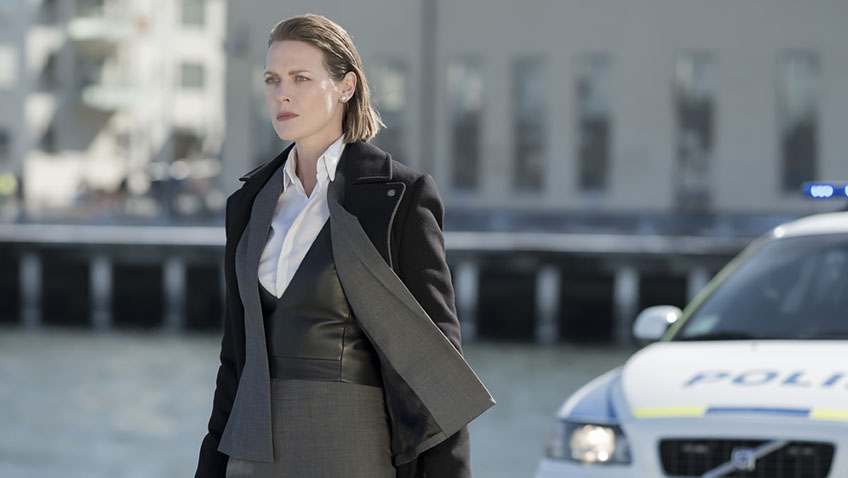 Synnøve Macody Lund in The Girl in the Spider’s Web

You may recall that Lisbeth’s talents include computer hacking, but she hacks one of the most secure sites in the world and makes off with Firefall as though she were ordering a book from Amazon. Balder is already on the run from the USA and soon the Russian mafia join in the chase. This is where the spider from the young sisters’ chess match in the prologue reappears as a tattoo and symbol of an evil gang. Dragon tattoo, spider tattoo – see how easy it is to make a sequel?

It is important to add that Lisbeth, too, goes on the run when her home is attacked even before she inherits Balder’s autistic son, August (Christopher Convery). He alone can activate Freefall with his mathematical prowess and memory. The escape provides the audience with some reasonable action scenes, as you would expect. 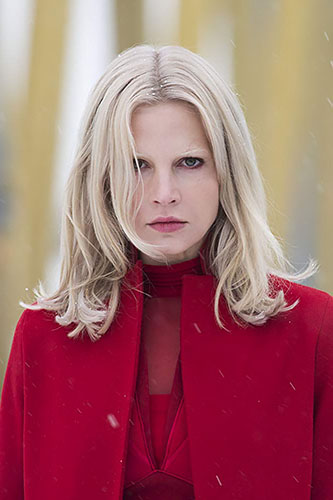 Sylvia Hoeks in The Girl in the Spider’s Web

In all of this Blomkvist is along for the ride, a damp squib whose lack of chemistry with Foy’s Lisbeth is unforgivable. There was something of Larsson in the original Blomkvist played by Michael Nygvist, and part of the fascination with the books is all the detail about the amount of work, coffee and junk food and the number of cigarettes consumed that might have contributed to Larsson’s death from a heart attack. Gudnason made a great Bjӧrn Borg in last year’s double biopic, Borg vs McEnroe: handsome, trim, fit, healthy and perfectly cast as the ‘ice man’ of the tennis court, an epithet that is hardly appropriate for Blomkvist.

Spoiler alert, here for those who think the prologue is gratuitous. Camilla (Sylvia Hoeks), who stays behind when young Lisbeth escapes from her father, grows up to be a deranged criminal, nurtured their dad. When Camilla reappears out of the blue after so many years, Lisbeth is as shocked as Thor in last year’s Marvel comic, movie Thor: Ragnarok when his long-lost sister, Hela, reappears as an avaricious monster. And frankly, so are we, as this sister is a new character in the franchise. That Camilla somehow harbours a grudge against Lisbeth can be attributed to her insanity, but there are very few in the audience who could understand, let alone share, Lisbeth’s surprising tears. There is nothing more alienating for the audience than watching a character burst into tears when all you feel is let down.

Foy (The Crown, Breathe) is a great actress with a wide range, but her preparation for The Girl In The Spider’s Web

was undoubtedly Steven Soderbergh’s horror/thriller Unsane, made for $1.5 million (and grossed $14 million). This film was reportedly made for $43 million and will have to work hard to recoup its budget. This might be some small victory for Eva Gabrielsson, Larsson’s partner of 30 years who lost the control of his intellectual property to Larsson’s estranged father and brother because, for security reasons, they never married.