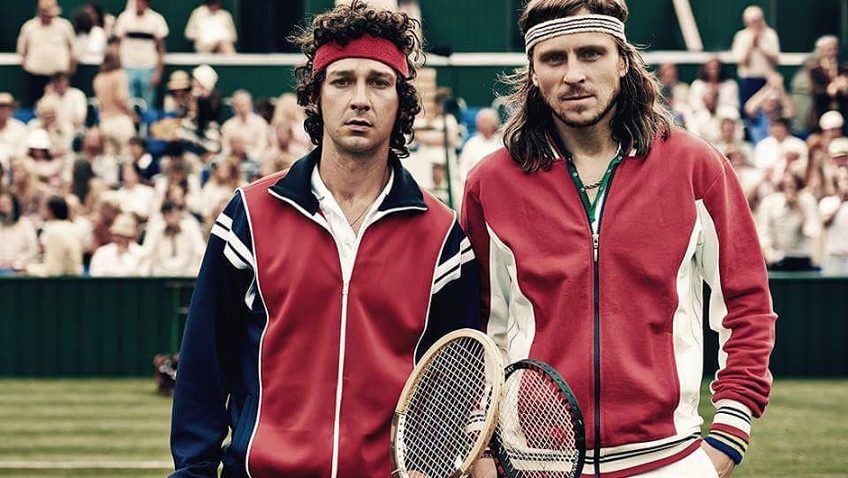 Borg vs McEnroe is the story of the match that tennis fans and bookies the world over were waiting for – and that both tennis players were dreading. The 24-year-old Swedish 4-time Wimbledon title defender Björn Borg and the 20-year-old American upstart John McEnroe, hungry for his first Wimbledon title, are a perfect match. They had met 14 times in their careers, and each had claimed 7 victories when they find themselves face to face at the 1980 Wimbledon Men’s Final.

The media hype is focused on their clash of personalities, dubbing the match, McBrat” vs. the “Ice Man. The tempestuous, foul mouthed McEnroe (Shia Labeouf) is called ‘the worst representative of American values since Al Capone.’ His language is, in fact, responsible for the film’s unfortunate 15 certificate. Borg (Sverrir Gudnason), by contrast, is the controlled, quiet, consummate professional. Danish director Janus Metz’s fascinating film turns the tables on that convenient myth. It goes beyond the confines of a double biopic to examine the nature of rivalry and the toll it takes on anyone driven – and being driven – to be the best.

ESPN called the 1980 Wimbledon Final ‘one of the three or four greatest sporting events in history” and The New York Times tennis writer Neil Amdur believes it may be ‘the sport’s single most compelling piece of court magic”. Most viewers over 40 will know the outcome and younger viewers can google it. But Metz, who directed the tense and thought-provoking war drama Armadillo is more interested in the forces that lead the two titans to the place where they realise just how similar they really are.

Metz constructs the film as a series of flashbacks that punctuate all stages of the 1980 Wimbledon Match, culminating in a thrilling re-enactment of the final.

McEnroe was born to parents who could afford to give him the best of everything, but they demanded dividends. In one scene the young John’s tiger mother Kay (Jane Perry) is a kind of Delilah cutting John’s locks of hair while interrogating him over a 96 grade in a geography test. ‘What about the other 4 points?’ she asks. Similarly, when a dinner party guest stumps the young maths prodigy his father (Ian Blackman) looks as disappointed as he does some ten years later at Wimbledon when Borg takes the second and third sets.

As we see in an opening ‘home movie’ style scene, young Björn (played by Leo Borg, Björn’s son) practices on the garage doors in Södertälje outside of Stockholm. When Björn’s temper and bullying behaviour get him suspended from school, his father threatens to sell his tennis racket. The precocious young athlete catches the eye of Davis Cup Captain Lennart Bergelin (the great Stellan Skarsgård) whose nerves stymied his own career. He sees a bit of himself in Borg and won’t let him fail. Sverrir Gudnason in Borg vs McEnroe

Surrogate father Lennart harnesses the boy’s temper and nerves, successfully guiding him through his entire professional career. Lennart allows the 15-year-old Borg (Marcus Mossberg) to represent Sweden in the 1972 Davis Cup against 20th seed, 24-year-old Onny Parun in exchange for a promise to channel his energy and fury into his forehand and backhand. After beating Parun and going on to become the youngest player to win Wimbledon and the French open, Borg becomes a heartthrob and superstar, installing himself in tax-sheltered Monaco.

As for Borg’s parents, according to playboy Vitas Gerulaitis’s (Robert Emms) helpful exposé at a London nightclub, they were only allowed to watch his matches once every two years and only if wearing a prescribed set of clothes. He must have the same car, the same fabric, and the same number of towels on court. The 50 rackets Lennart lugs around to each tournament with the task of testing the strings, and the temperature of hotel rooms are just a few of Borg’s OCD-leaning quirks.

There are a lot – maybe too many – shots of the two players, sitting silently battling nerves and focusing. When they are both sitting in the Wimbledon players’ waiting room under the Kipling line, “If you can meet with Triumph and Disaster / And treat those two impostors just the same…’ neither man looks up to read it. Both are there to triumph and the pressure on 24-year-old Borg – as both players continually point out – is impossible for most people to imagine. ‘Nobody will remember that I won Wimbledon four times in a row,’ he muses; ‘just that I lost the fifth time.’

We see McEnroe give the cold shoulder to doubles partner Peter Fleming – and possibly sabotage his game – when Fleming makes it to the quarter-finals opposite McEnroe. While Borg has mastered his temper on the court, he can still lose it with those close to him, wounding them with reminders of their inferiority in tennis. Borg’s fiancée, the former (36th ranked) tennis pro Mariana Simionescu (dead ringer Tuva Novotny) gets the ‘you-don’t-know-what’s-it-like’ treatment with Lennart being complicit. Borg and Mariana married that year (1980) and, not surprisingly, divorced in 1984.

Shia Labeouf manages to capture McEnroe’s erratic, obsessive nature. The actor’s unflattering off-camera antics might colour the feeling that this is his best role to date. Icelandic-born, Swedish actor Sverrir Gudnason mercifully, speaks in Swedish (this is a bilingual film with sub-titles). The authenticity is further enhanced by his uncanny resemblance to Borg. When the girls pursue him like he is a rock star, and young boys’ request autographs, Gudnason’s Borg has the charisma to convince us that Borg really was that big a deal. By the end of the film, you cannot help but regret his decision to retire at age 26 (following his 1981 Wimbledon defeat to McEnroe). Like Lennart, Borg ultimately could not win his battle with nerves and his competitive nature.

The film is let down by scriptwriter Ronnie’s occasionally clumsy lines that are designed to aggrandise the young players, and failure to capture McEnroe’s persona as well as he does Borg’s. This does not detract from the thrilling tie break in their nail-biting final game nor from the touching portrait of two young men for whom Triumph is not an imposter, but what they live for.