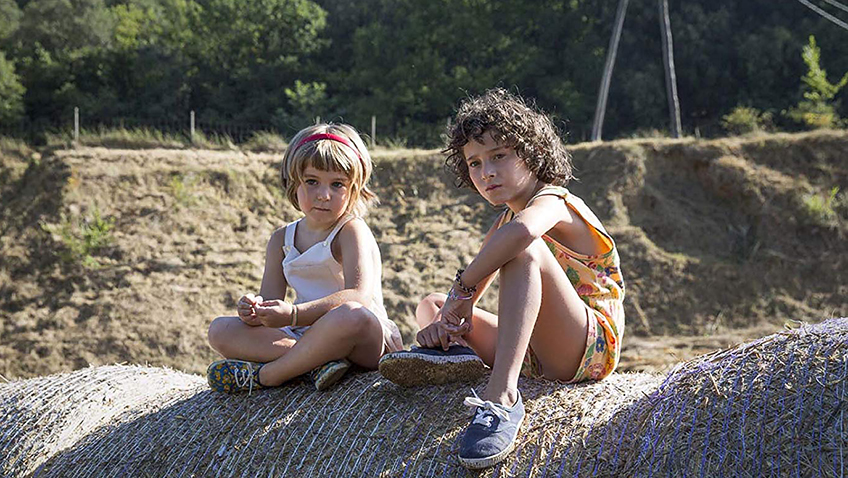 She may be as far away from the characters in French writer/director Robin Campillo’s 120 BPM or from Hollywood’s Dallas Buyers Club as you can get, but in Barcelona, 1993, six-year-old Frida (Laia Artigas) is also a victim of AIDS. That she does not completely understand what it is does not diminish the pain. She is told that her mother has died of pneumonia from a virus – a little animal that gets inside the body. She asks if the doctors were new and is told they did all they could. We do not know when her father died, but he predeceased her mother.

Carla Simón’s autobiographical film is a sensitive, atmospheric coming-of-age story in which an orphaned young girl has to find her place in a new family and in a new rural location. The film requires patience as there is no real narrative strand, and events are observed rather than presented to us. There are dividends to this approach as Simón captures her childhood moods and memories with uncanny precision coaxing compelling performances from the striking, charismatic Artigas and the adorable, four-year-old Paula Robles playing Frida’s Cousin Anna.

It takes a while for us to realise what is going on as Simón shoots the film through Frida’s young eyes. As packing is going on in the Barcelona apartment that has been her home, she stands apart, cradling a doll. The voices are off-camera suggesting her loneliness in the middle of the home she is about to leave.

Frida arrives at her uncle Esteve’s (David Verdaguer) rural property, which, for any child would be paradise. There are chickens, a vegetable patch, beautiful woods and a nearby cold water pond to swim in. Esteve’s wife Marga (Bruna Cusí) is as loving, inclusive and understanding with Frida as is her husband, although they are both feeling their way and aware of their huge responsibility.

At first, the normally outgoing and active Frida is quiet and well-behaved, as if she is unable or unwilling to feel anything. She also has to get used to her new family, but to her new rural environment. She learns how to collect eggs, and in one scene Marga, who is preparing dinner, asks Frida to get a lettuce from the garden. Happy to have been chosen for the task, Frida picks up a large cabbage, despite little Anna warning her that it was not a lettuce. When Marga tells her the same thing she runs back to the garden, discarding the cabbage to its fate, rolling down a muddy slope, as though it was responsible for tricking her.

Esteve and Marga have to deal with Frida’s mood swings as she begins to test them and the boundaries of behaviour. Early in the film, Frida’s family believe that she might have inherited her mother’s virus, and Marga drives her to the hospital for tests. On the way, when Marga asks a grumpy Frida what’s wrong, she responds that her hair is not right. Marga tries to fix the girl’s lovely curly hair, but unsatisfied, Frida throws the comb out of the car window waiting for Marga to retrieve it. 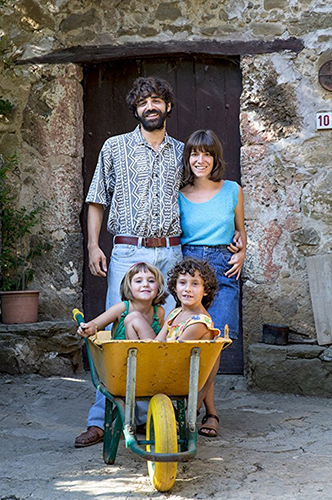 Artigas is such a natural, talented little girl that we can tell from her reactions and facial expressions to what extent her mood swings are a function of the attention she is receiving. Insecure and fragile, she requires constant attention and was probably a child who needed to be in the limelight even before her parents’ deaths. Folding into the film her own childhood memories, Simón provides the local colour of typical Catalan festivities – Capgrossos and Gegants dancers (who wear huge painted, rather frightening heads – from her own village. Leading the procession of dancers with a flag Frida’s skips along with a huge smile on her face as she surveys the crowd, all of whom are looking in her direction. She feels important and is happy.

The dark side to Frida’s attention deficit comes in the form of sibling rivalry with her vulnerable cousin, who more than once suffers from Frida’s cruelty. It is calculated retribution, for Anna has real, living parents. In one scene Frida sits passively at a village dance watching her aunt and uncle dance with Anna wrapped around Esteve’s leg. On another occasion Frida spills milk on a nightdress that she is given by her grandmother because, she wails, she wanted the pink nightdress given to Anna.

Marga is sympathetic, but realises that Frida needs boundaries and discipline, and makes her wash the nightdress. Frida complains to her cousin Lola (Montse Sanz) who is helping her, ‘they make me clean everything. I’m like their housemaid,’ in an unsuccessful attempt to gain more attention, and sympathy.

In addition to showing us some of the cultural events of rural life, Simón factors in a subtle panorama of Spanish society at the time. This partly explains why Frida’s new guardians, representatives of the neo-rural class who questioned traditional values and what Franco stood for, attempt to limit Frida’s contact with her Grandma Maria (Isabel Rocatti). Maria, who lived through the Spanish Civil War and retained her fervent Catholicism, spoils Frida and treats her with kid gloves. This encourages Frida to act out, climbing into her grandparent’s car and refusing to get out when they visit against Esteve’s advice, bringing the divisive night dresses as gifts.

Maria teaches Frida to say the Lord’s Prayer to protect her mother every night. At her uncle’s, Frida prays at a makeshift shrine to the Virgin Mary in the trees and brings offerings to her mother. Gradually, Frida abandons the unrewardingly silence of the statue. She may be coming to terms with her situation or still emotionally numb. Her sudden and uncontrollable tears in the midst of a joyful pillow fight with Anna and Esteve at the end of the film might signal a turning point. Frida will eventually realise how lucky she is to have Esteve and Marga, – skilfully portrayed by Verdaguer and Cusí – fun-loving, generous, and compassionate parents of unusual patience and wisdom. And this film is a fine tribute to them.