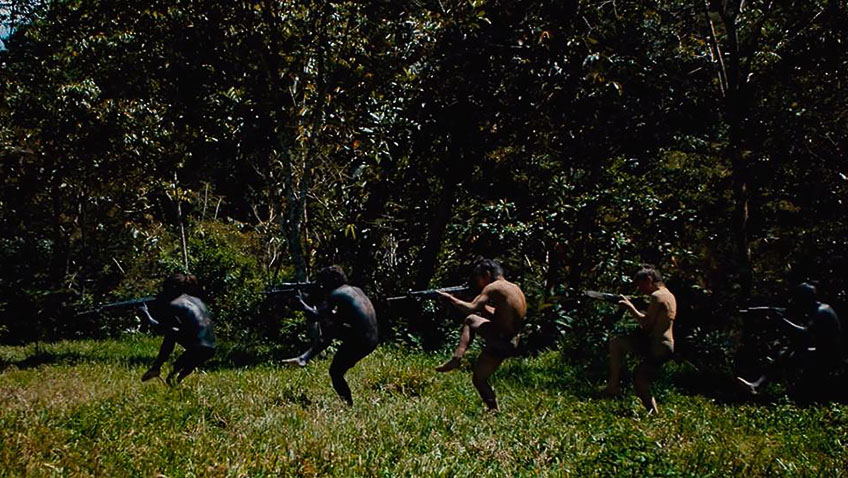 A worthy winner of this year’s London Film Festival

Writer-director Alejandro Landes says that the ghosts of Colombia’s self-destructive FARC wars, ‘inspired me to shape the film like a fever.’ The result is the hallucinatory Monos (Monkey), an intense thriller shot from the point of view of a squadron of adolescent soldiers stationed high in the cold, muddy mountains, and then in the humid, insect infested jungles of some Latin American country. Landes drops us into the chaotic fray of a vague warring faction and holds us there with ‘Doctora’ (Julianne Nicholson, August: Osage County), an American hostage the soldiers are guarding. That the actors are transformed into savages trained to kill and the locations are so remote, and foreboding strengthens Landes’ stranglehold on our senses, that breaks only occasionally, when we feel his presence. 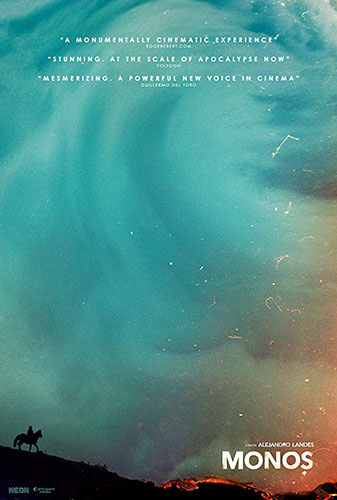 Many child soldiers are forced into servitude when they are orphaned, but we know nothing about these feral teenagers (and one pre-teen) except for their childish noms de guerre, like Smurf, Boom Boom, Dog and Rambo. They seem as ignorant of the politics of their country or the reason they are fighting and the politics as we are. They know only that they work for The Organisation and Monos is a squadron within it. You might imagine from the increasingly lax supervision that this is the aftermath to President Juan Manuel Santos’s controversial 2016 peace accord with the Revolutionary Armed Forces of Colombia when armed splinter groups continue to wage war as that is all they know.

Our first glimpse of the soldiers they are standing on a ridge silhouetted against the sky and as the low clouds meet the mountain top, you might think of Wagner’s Valhalla the home of the gods who are losing their grip on mankind. The soldiers live underground in a derelict bunker, where one room is separated for the kidnapped doctor who speaks rudimentary Spanish, while the children speak no English.

The monotony of this life is not as apparent as it could be as the Monos is so full of incident, but there are manifestations of boredom. When the film opens the children are playing a game of football blindfolded and they celebrate the 15th birthday of the androgynous Rambo (Sofia Buenaventura) by kicking her on the ground. You cannot but be reminded of Lord of the Flies

. William Golding’s 1954 novel is also set in the context of an unidentified war raging around a group of children who have to learn to get along and survive without adult supervision.

One day a diminutive, indigenous commander called Mensajero or Messenger, (real-life former guerrilla fighter Wilson Salazar) shows up to inspect the squadron, put the children through their paces and made a quick proof of life video, by putting Dr Sarah Watson in front of a current newspaper. On this occasion Mensajero also delivers a precious dairy cow. He warns the children that the cow is not a gift, but a loan which must be returned intact when they move on. From this moment, we know that something terrible will happen to that cow.

Taking advantage of Mensajero’s presence, group leader Wolf (Julian Giraldo) seeks approval for his marriage to Lady (Karen Quintero) and it is granted. Wolf and Lady are the good-looking, stable, golden couple and the marriage festivities go on into the early morning hours with trigger happy young men including Dog (Paul Cubides) and Bigfoot (Moisés Arias) firing their omnipotent machine guns blindly into the darkness with foreseeable results.

The death of the cow is like an omen that alters the fabric of the group, with Bigfoot (Disney Channel’s Hannah Montana, The Kings of Summer) replacing Wolf, who has taken responsibility for the cow in the way that few of today’s world leaders would.

We also observe the way the children meet to discuss whether to tell the truth or lie for the common good about who really killed the cow. While some believe the truth must be told, others agree that there is no point in another death (by firing squad) for what was a mistake. But the lies will come back to haunt the soldiers during a control exercise in which Mensajero gives each child the opportunity to stand up and complain about a fellow soldier actions during his absence.

After the squadron’s existence is revealed in a gun battle with unnamed invaders, Mensajero orders them to pack up to move to a new clandestine location in the jungle. We see that Doctora takes with her a sabre she has stolen from a sleepy guard and hidden it in the wall.

Rambo remains apart from the other children, contemplative and quiet, as though she remembers another life before being abducted or forced into the squadron or is longing to know another life. There is a moving scene inside a family home where Rambo wakes up in a proper bed, surrounded by family photos. Her thoughts are palpable, but short lived.

When the squadron moves to the jungle, and Bigfoot turns into a pint-sized Colonel Kurtz, we feel the delicate bond among the children and the distant authority that controls them, disintegrate. Bigfoot is a volatile leader who lets his inherited role go to his head, and unlike Wolf, he is not about to put honour above his life.

Taking advantage of the chaos and lax leadership, Doctora makes two escapes, both terrifying and real thanks to Julianne Nicholson’s sensational and very physical performance. Landes embellishes the second escape with a brilliant, psychologically insightful incident that feel spontaneous. As Doctora is equipping herself for her second escape during a brief window of opportunity, she stops to remove the boots from young Smurf (Deibi Rueda) who is tied to a post as punishment for criticising Bigfoot. When she struggles to put on the boots, he instinctively blurts out, ‘cut off the toes’, enabling her to wear them. But when he pleads with her to take him with her, she sees him not as a little boy begging for his life with tears, but as the soldier who, under ‘do or die’ orders from Bigfoot, captured her at gunpoint after her first escape.

Although many of the actors look older than teenagers, the combination of inexperienced and first-time actors works well, while Jasper Wolf’s atmospheric, visceral cinematography and Mica Levi’s (Jackie, Under the Skin) powerful electronic score create such a sense of place that we feel trapped like hostage in a nightmare. There are occasions where Landes’ hold on us relaxes and we are aware that we are watching a thriller, but for the most part we are bound to our seats.