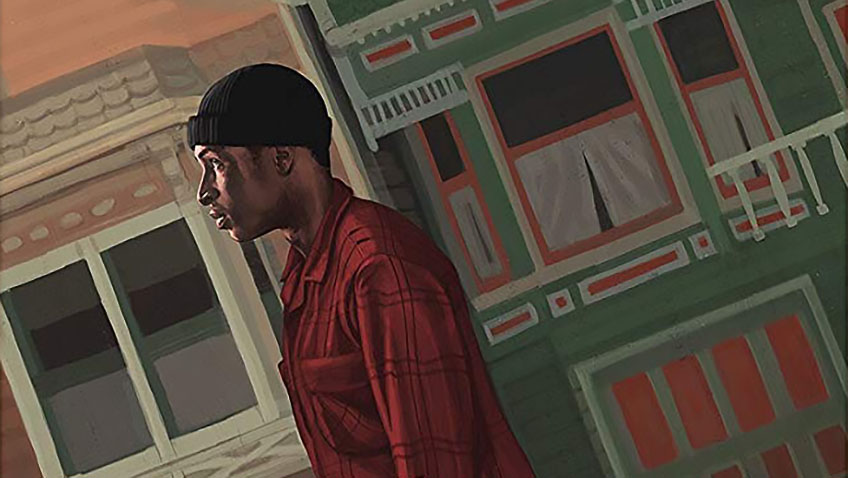 It is true that the black population of San Francisco has declined from 13.4% from 1970 to approximately 6.1% today, but Joe Talbot’s quirky film is not a satirical comedy – or tragedy – imagining what that would be like. In fact, too little of the black population’s imprint on San Francisco is developed, despite a promising focus on that city’s famous architecture and an autobiographical underpinning.

In present day San Francisco Jimmie Fails (himself) works in an old-age care home and shares a cramped bedroom with his friend Montgomery Allen, or Mont, (Jonathan Majors) in Mont’s grandfather’s (Danny Glover) house across from a forlorn corner of San Francisco bay.

Mont, who not only draws, but is a playwright in his spare time, works in a market stall and neither man appears to have a romantic partner. Their only friends hardly seem like friends at all. A small, peaceful gang stand on the street in front of Mont’s house day and night and fire offensive comments at the friends. In one scene, Mont begins directing the men when they become embroiled in an altercation as though they were actors in an imagined play.

When we first meet the two friends, they are sitting on some rocks in front of Mont’s home listening to an annoying soap box preacher. ‘Do you think he rehearses this’ one asks, while the other returns, ‘It sounds impromptu.’ Sadly, this isn’t waiting for Godot, as the two men are waiting for a bus. And happily, as the preacher is driving us crazy, they decide not to wait for the bus and to skateboard into town on Jimmie’s beloved skateboard. As they fly down the city streets, the inhabitants are, for some reason, frozen like statutes of salt. It’s a distracting stylistic device that seems gratuitous, like a lot of the film.

Jimmie’s project is the renovation of a beautiful Victorian house in the now exclusive Fillmore district. As he cannot gain access to the interior, he begins painting the window frames with loving care. Jimmie tells Mont that the railings are periwinkle, not black and then, peering through the window, observes, ‘the wallpaper is peeling, they’re killing this house.’ But Jimmie’s obsession with the house is still a mystery. When an elderly, white couple return home, the woman turns rather belligerent while her husband is more conciliatory and reassures them his wife will not call the police.

When we see the woman again, she is having a breakdown in front of the house from which she has been evicted in an ownership dispute or probate battle. The house is empty, and despite the presence of aggressive, but polite estate agent, Jimmie decides to move in. When Jimmie invites Mont to join him, he does, choosing the gorgeous dining room as his bedroom.

After reclaiming his grandfather’s original furniture from his Aunt Wanda (Tichina Arnold) who has kept them in storage for years, Jimmie completes the transformation of the exterior and interior, revealing the building’s splendour. The house is surely worth a few million dollars, much more than Jimmie can afford.

One day tourists on electronic scooters congregate in front of the house as their tour guide tells them about the 19th century house. Jimmie, listening on the balcony contradicts the guide with such authority and conviction that he is taken aback. Jimmie tells them that his grandfather, born in the South, returned from the war and did not want to occupy one of the houses forcibly vacated by the Japanese Americans who had been living there. So, in 1946 he built his own house.

While this sounds like a tall tale, Jimmie believes his own dream and Mont has come to believe it too, despite the absence of title papers or any claim to the property.

In fact, actor Fails, in his first major role, was born and raised in a Victorian house in the Fillmore district until he was three. When his grandfather died, and his relatives could not afford the upkeep and taxes, they lost the title and Jimmie lived in foster care and public housing for the rest of his youth.

This autobiographical element should have imbued the film with a lot more drama, context, characterisation and pathos than it does. The Last Black Man in San Francisco is a missed opportunity for a story not yet told. African Americans first arrived in San Francisco during the Gold Rush and flocked to the city from the American South in great numbers when the War Manpower Commission recruited them to work in the naval docks. The Fillmore district was in fact, the centre of the black community in San Francisco. The changing face of neighbourhoods is part of the history of this cosmopolitan city, which now has the highest percentage of gay people of any American (and possibly any world) city.

The idea of a disillusioned, homeless, low-skilled worker seeking to reconnect with his people’s past by creating a myth that he comes to believe, is compelling, especially as the story of African Americans in San Francisco can support the narrative. But the script, by Tabot with Rob Richert, misses every opportunity to say something meaningful, despite a two-hour running time, while the stylised acting is lacklustre.

Mont has been hard at work on a play. The scene in which Mont presents it in the house when the two are threatened with eviction, should not only be cathartic and poignant, but should reveal Mont’s hidden talent as a playwright. All the community is there, as well as Jimmie’s estranged father. Instead, it is an amateurish and shouty tribute to Kofi (Jamal Trulove), one of the black ‘gang’ members who was stabbed, presumably while standing in front of Mont’s house. This does turn into a confrontation where Mont forces Jimmie to acknowledge his fabrication, but this does not seem to have been the point of the ‘play’.

While the film has some touching moments, and the shots of the house are a treat, the intriguing title is as wasted as is the promising premise.