Home / LIFESTYLE / REVIEWS > / FILM REVIEWS / Chastain and Sorkin are a formidable combination, but this isn’t a formidable film

, while a strong biopic, isn’t a formidable film.

Chastain’s career has been a feminist trajectory that most actresses would envy, but the key to her characters – even the dizzy, blond housewife in The Help – is that they always have moral fibre. By the time Chastain appeared in Miss Sloane earlier this year, the actress also had the power to carry a film with no distracting sub-plots and no leading man sharing top billing.

There are a lot of similarities between Miss Sloane and Sorkin’s directorial debut, Molly’s Game

and chief among them is Chastain’s commanding performance. And any resemblance to James Joyce’s iconic character from Ulysses

is purely coincidental. Both films are about unmarried women in men’s worlds who stand on the moral high ground, facing down serious criminal charges. It’s not the déjà vu that lets down Molly’s Game

but a relentlessly talky script that substitutes self-righteous virtue for an interesting, involving story.

about her career as a Hollywood poker princess, verisimilitude – and human interest – should have been easy. Sorkin gives us the background, too, to make Molly’s character another one of his hard-edged, soft-cored heroes. Molly’s soft centre can be summed up as father issues, and when your father is played as a three-dimensional character by the fine actor Kevin Costner, they are deep.

Larry Bloom is there on the ski slopes supporting (although it sure looks like pushing) his daughter when Olympic hopeful Molly suffers a serious accident. It could be riveting, but all the while, Molly’s narration is telling us what we are seeing. And then, in off camera narration, she tells us what we are not seeing. ‘I decided to take a year off before law school and went to L.A. I wanted to be young for a while in warm weather.’ She then tells us: ‘My father disapproved of my decision to delay law school so he did not help me,’ paving the way for a string of odd jobs.

Molly ends up as an assistant to Dean (Jeremy Strong) a sleazy real estate agent who runs an underground poker game. Molly is a quick learner, particularly when the tips are pouring in: if not exactly down her décolletage, then certainly in tribute to it. The alleged feminist angle to this film is not the expensive, alluring dresses, but the fact that when Molly starts her own rival game, she can afford to buy them.

For ten years, high stakes celebrities come to Molly’s tables reassured by her discretion, professionalism, and ability to solve problems. They pay handsomely for their recreation, or addiction, and she is earning four million dollars a year in a man’s world.

Then, inevitably perhaps with so much money changing hands, Molly is taken in by brotherly Irishman, Douglas Downey (Chris O’Dowd) who brings the mob to the table. Molly, who is unaware of their presence, is soon in over her head. Before long, the FBI shut down her operation and Molly seeks the help of Charlie Jaffey (Idris Elba), a suspicious, scrupulously honest, and very expensive lawyer. You know they are going to bond in mutual self-respect as he initially refuses to take on the case but is won over by her refusal to betray her clients. If this were the McCarthy era, Molly would be in exile in Mexico. 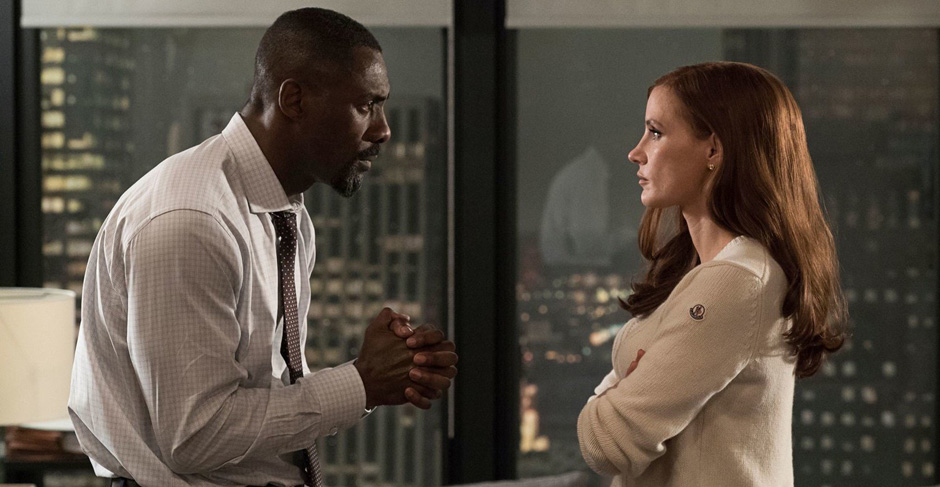 While the scenes between Jaffey and Bloom are vintage Sorkin, the interaction between Molly and her celebrity clients is marred by the distancing effect of narration. Sorkin, who created The West Wing, is the world’s master of rapid-fire dialogue and the witty, talk-heavy script, but here, without a third-party director’s influence, he wears out the viewer. At one point the first person narration blends into a complex explanation of poker rules until any neophytes will struggle to take it all in.

On the plus side, few actresses are as right for the role as Jessica Chastain, who gives an enthralling performance. You can see her making things up as she adapts her way up a steep learning curve. But you have to suspect that she and Sorkin glamorise Molly’s role, masking the reality with dollar signs. Who can believe that with all the drugs in the bathroom and booze at the table, the powerful men in the room treat Molly as one of their own? And can we believe that Molly – who does not have a boyfriend in her ‘prime’, (or girlfriend) really lives a life of abstinence? Lobbyist Miss Sloane puts her job first, too, but one of the best parts of that film is Sloane’s relationship with her regular gigolo from a call service.

The biggest problem with Molly’s Game

, however, is that it talks its way through the very part of the story which could get us hooked: the identity and characterisations of all these Hollywood celebrities. Without this, Molly’s Game

is the story of a girl rebelling against a predetermined life, but ultimately seeking – and earning – her father’s approval. While we might, along with Larry, come to respect Molly, we share the FBI’s frustration that she never names names.