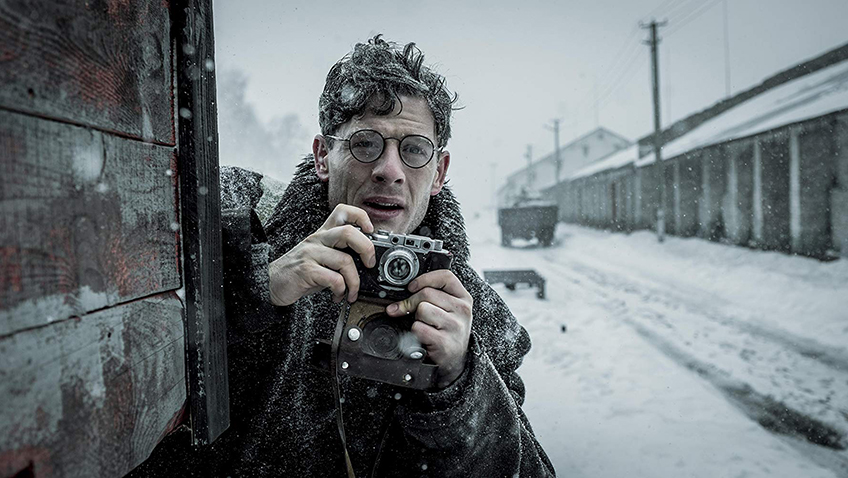 Agnieszka Holland’s political biopic gives us a good idea why the courageous, principled and humanitarian Welsh journalist and Stalin whistle blower Gareth Jones is not a household name. Her job with Mr Jones is to show us the irony of this situation and the topical relevance of this life of frustration spent screaming the truth to power and deaf ears. In this, and in recreating the paranoia of the early years of the Communist surveillance state, Holland succeeds, even if the tension is more cerebral than visceral. Working from a script by first-time writer Andrea Chalupa, whose meticulous research is all on the screen, at times the 140-minute film feels plodding, losing sight of the human story for the historic facts, and confusing attempts with George Orwell, to put them in perspective.

From 1932 to 1934 the entrenched despot of the Soviet Union, Joseph Stalin, was way ahead of Adolf Hitler (who had only been elected chancellor in March 1933) in the mass murder tally. His self-induced starvation policy, the Holodomor, was not only introduced to force the recalcitrant farmers of the Ukraine to collectivise their properties but to kill them.

This was all, of course, covered up. In 1933, as today, the Soviet Union’s propaganda machine was too highly developed to be undone by Gareth Jones (James Norton), a 27-year-old former foreign affairs adviser to a befuddled David Lloyd George (Kenneth Cranham). Jones’ claim to fame at that point is that he was the first foreign journalist to share a plane ride with Hitler. Less than a year later, he would be, even before Vasily Grossman or Arthur Koestler, the first – and only – person trying to tell the world about the Holodomor.

In the shaky opening segment, the cabinet room scoffs at Jones when he tries to warn them about the risk Hitler poses, indicating that an alliance with Stalin might be the only way to resist. But if Jones understands Germany, he is confused about the mixed signals from Moscow. The Soviet Union is broke, yet he hears that new chemical and tank companies and factories are being built. Throughout the first half of the film Jones asks everyone he meets who is financing Stalin’s spending spree. Before Jones can ask Lloyd George to send him to Moscow to get the answer to his question, he is sacked. Budget cuts.

Undeterred, Jones travels as a stringer on a press visa and believes he will have a week at a grubby hotel in Moscow. Instead, he is taken to the luxurious Metropole, compliments of the Soviet Union, and politely told he has two days. The receptionist informs him he cannot stay longer because the hotel is full due to a Metropolitan Vickers (the British industrial electrical equipment manufacturer) conference. When he meets the world’s media, all confined to the Metropole, a representative from Metropolitan Vickers knows nothing about a conference. Jones suddenly realises what he is up against.

This feeling is intensified when he meets the New York Times bureau chief Walter Duranty (Peter Sarsgaard, superbly creepy and dissembling) and learns that Paul Kleb (Marcin Czarnik) had been recently murdered in a robbery – just outside the Metropole. To Jones’ question about the spending spree, Duranty, who has a Pulitzer Prize for his Moscow reports, says, ‘Grain is Stalin’s gold. The 5-Year Plan has doubled the output.’ An attractive woman in the office, Ada Brooks (Vanessa Kirby, excellent) delivers a manuscript to Duranty’s desk. Standing above him as he places large red lines across 90% of it, he presents Ada to Jones in a glowing light. Jones has picked up on the expression on Ada’s face when Duranty mentions Kleb’s ‘robbery’, and he later learns she and Kleb were more than just colleagues.

It is not until Jones sneaks out of the Metropole, bribes a hotel manager to let him stay there, and earns Ada’s trust, that he formulates his plan to travel to the Ukraine. The difficulty for Jones – and for everyone without the gift of hindsight – is that Duranty, and even Ada, who is from Berlin, sincerely believes that it is worth the sacrifice of a few thousand peasants (the tally was some 4 million) to achieve the great revolution and the defeat of fascism. Jones is not convinced.

Shaking his Communist minder, who is stuffing his face with rich food on the train, a recurring visual motif to remind us of the hypocrisy of ‘communism’, Jones steps into the packed, silent, third-class carriage where he offers to pay a man royally for his coat. To his surprise, the man asks for bread instead.

Jones’s interest in the Ukraine apparently stemmed from his mother’s sojourn in what was, in 1932, Stalino (now Donetsk), but was once a city named after the Welsh industrialist John Hughes, for whom Jones’ mother worked. It is in Stalino he slips off the train and discovers people dropping in the street from hunger in the breadbasket of the world. In the villages, bodies are piled into horse carts, and babies screaming for their dead mothers are tossed on top of the pile.

It is when Jones wanders through the snow-covered wasteland of the Ukraine that the film, though shot on a much lower budget, begins to approach the scale of a saga, like Warren Beatty’s Reds. Calupa’s grandfather apparently told her stories of life on Ukrainian farms in this period, and everything, down to an over extended and unnecessarily explicit scene of cannibalism, rings true.

After Jones is captured, forced to repeat that there is no starvation in the Ukraine, we are treated to thirty minutes stuffed with events – all fascinating – particularly his meeting with William Randolph Hearst (Matthew Marsh). But these are so hurried that they disengage the viewer from the story.

What is not in the film is that Jones returned to Germany right after his trip to the Ukraine and gave a speech about the Soviet government’s engineered starvation. Hitler picked up on this and linked all Marxists – which included the Social Democrats, the major party in the Weimar Government – with mass murder of their people. This boosted Hitler’s popularity. Jones could not win. His articles, published in Hearst’s paper, were discredited by Duranty in the NY Times. And who could blame the USA for backing Stalin with the rise of Hitler? The score, Fake news 1, Jones zero, was a simple one to calculate.