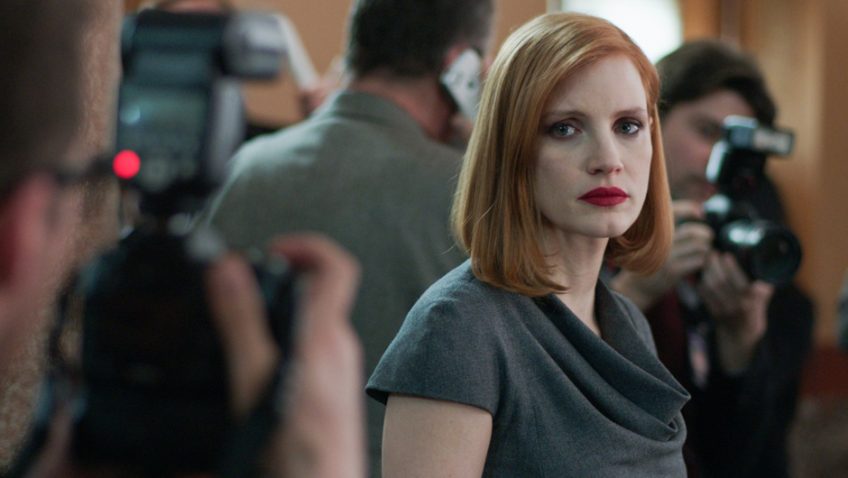 The eponymous heroine’s position at the top of the 2.6 billion dollar US lobbying industry requires a shrewd, tough-skinned, silky-tongued, poker-faced talker who looks as good as she sounds and Chastain (The Zookeeper’s Wife, Zero Dark Thirty, The Help) transforms herself for challenging role to pull off. Miss Sloane

might not be a masterpiece and there are a few things that don’t add up, but it gives us one of the best female characters of the decade; solid entertainment and a satisfying social message – unless you’re a member of the gun lobby.

If, in a morally bankrupt industry, all her opponents can get her on is a minor ethics violation, she must be doing something right. The film flashes back to show us Miss Sloane’s rollercoaster ride to the hearing where it implodes in bravura, though arguably over-the-top ending.

Elizabeth Sloane is as cutthroat as the industry she works in, but where her competition might draw the line, she doesn’t. The ‘Miss’ in the title is significant, for while Elizabeth is the epitome of feminism she has no need for the politically correct Ms before her name. It is also significant for there is no work/life balance with Elizabeth as with many a Mrs. Unfettered by family, a partner, or any semblance of emotional attachment, she pays a discrete agency for regular hotel trysts with escorts who cannot even know her name.

One of the little gems in the film is the supporting performance by Jake Lacy, Hollywood’s resident stud du jour whose all-American good looks and football player stature that make him such easy, reliable casting (Their Finest, Love the Carols,The Obvious Child. Here Lacy plays a sex object required to service his busy client with no questions asked. When he meets her outside of the hotel at a social function she shuns him as though he were a germ. That makes his role as a witness for the prosecution at the congressional hearing all the more suspenseful, and it’s worth the price of admission to see what a class act this gigolo really is.

But as Elizabeth is a pill-popping insomniac, it is in the office where she spends most of her time. Elizabeth is addicted to her high pressured job because she loves to win and is good at it. She uses her arrogance and acerbic wit as a weapon; speaks her mind; instils fear in grown men and manipulates her staff, but still – just about – inspires loyalty tinged with awe.

‘Lobbying is about foresight; anticipating your opponent’s moves and devising counter-measures,’ she tells her close assistant Jane Molloy (Alison Pill) early on. Shortly thereafter Elizabeth impulsively quits her job at Cole, Kravitz when head honcho George Dupont (Sam Waterston) orders her to represent the National Rifle Association and ‘start getting women into guns.’ One of several paradoxes that make the film so worthy of discussion is that Elizabeth Sloane is presented as a professional who never lets sentiment, personal views or emotion interfere with winning the high stakes game for which the client is paying. But here it is her animosity for the gun lobby – and, it has to be said, the pushy fat cats who represent it – that fuels her bridge-burning resignation and motivation to win at any cost. In a tense stand-off, most of her team follow her out of the office. To our surprise, Jane Molloy stays behind and helps George Dupont nail Elizabeth. Is she a chip off the old block who is launching out on her own? Is she fed up with Sloane’s ego and cutthroat tactics or is there another agenda?

Elizabeth goes straight to work for anti-gun lobbyist Rodolfo Schmidt (Mark Strong) who has had the chutzpah to offer her a job representing an anti-gun law bill pro bono. The character of Schmidt – who works for a firm called Peterson Wyatt although he appears to be the decision maker- is underwritten. Madden needs tension between Schmidt and Elizabeth, but Schmidt appears inconsequential – which is a shame as Mark Strong is such a notable, expressive actor. One of the problems with the film is that it’s hard to imagine how such an honest, by-the-book lobbyist has managed to keep afloat an agency that represents lost, liberal causes.

At Peterson Wyatt Elizabeth notices the talents of Esme (Gugu Mbatha-Raw, Belle), a young graduate who is a natural in front of the camera and is also good at getting the votes that the bill needs. At first Esme is thrilled to be the face of the bill, but Elizabeth (is she jealous?) begins to exploit her after discovering that Esme was the victim of gun abuse. When this exploitation puts Esme in actual danger, she is caught between her idealism for the cause and admiration for Elizabeth and her moral code and sense of self-esteem. Here we identify with Esme and see a cruel, heartless and unacceptable facet of Sloane’s character.

Of course, for there to be tension in the story Elizabeth cannot win all the time or she would not have ended up at the hearing. And this introduces us to another, more undesirable, paradox in the film. While Miss Sloane is presented as more unscrupulous than her male counterparts, she is – for a time – undone by the even more devious, and possibly illicit methods of Dupont’s firm.

‘Know your subject,’ Elizabeth admonishes a neophyte caught short in a meeting. And apart from the reservations mentioned, British-trained corporate lawyer Jonathan Perera’s debut script adheres to that advice. Liberties are taken for dramatic effect, but Perera and the actors have done their research and Madden presents the industry in a surprisingly true light.

depends on fast pacing, morally challenged characters and a mix of credibility and fantasy – a bit like the John Grisham novel (The Litigators

) that insomniac Elizabeth reads before her downers kick in.