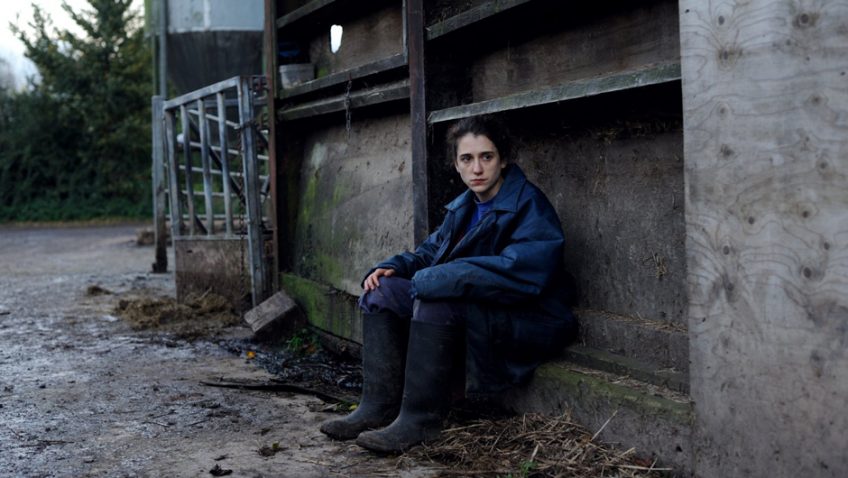 This impressive British feature debut is stronger on atmosphere than story

, which, at 83 minutes, qualifies as a feature film debut. Ellie Kendrick (Game of Thrones) gives a charismatic, nuanced performance as Clover, a Somerset diary farmer’s daughter who returns home from veterinary school to attend the funeral of her brother, Harry (Joe Blakemore). Leach excels at establishing a sense of place but the family drama hints at deeper mysteries than it ultimately delivers.

The film opens as a horror film might, with revelling sounds heard against a black screen until we see some naked young men – whom we come to recognise as Harry (Blakemore) and his best friend James (Jack Holden). They are drinking and fooling around as though in some ritualistic rave, but it turns out to be a celebration. This opening creates a tonal disparity that the film never shakes off.

We then cut to daylight, the obvious aftermath of a party that was never cleaned up, and a muddy farmyard, ravaged by the recent Somerset floods.

Clover (Kendrick), with only her rucksack for luggage, wanders around the farmhouse and yard where she eventually runs into her father Aubrey (David Troughton from TV’s Casualty and New Tricks). He explains that with no insurance to help with the house cleanup, he is living in a caravan that we see parked next to the farmhouse.

There is a tension between Clover and Aubray who is seemingly in denial about Harry, although the tension is understood intellectually more than it is felt viscerally. Aubray continually refers to the death as a ‘bloody accident’ that occurred when James was plastered. Clover, however, continually presses home the compelling evidence of a suicide. Refusing to grieve or discuss the death, Aubray busies himself selling half the herd for some badly needed income. Clover puts off planning the funeral to help her father with the farm work.

Aubrey, who decided to give the farm to Harry rather than Clover, claims that Harry was happy at the celebration and exhibited no suicidal behaviour. He seems to blame Clover, the more mature, level-headed and competent of the siblings, for not returning after the floods to help her brother and for showing no interest in the farm. James, Harry’s best friend offers some comfort and insight, but he remains guarded.

As Clover pieces together the truth behind her brother’s suicide and contemplates the homestead’s bleak future, she is able to break through Aubray’s defences and through the barrier that has separated father and daughter.

Once you know the surprise that Clover has to piece together there is not much of a story, but the atmosphere is so powerful that it is not that noticeable. The daily life on the farm and the aftermath of the floods are so authentically drawn and brought to life that the story could have been lifted from a Somerset newspaper.

David Troughton in The Levelling

David Troughton is convincing with his mood swings and outbursts that suggest that behind his tough exterior he is in emotional meltdown. Jack Holden is excellent as the loyal, slightly guilty friend who has to be pushed to admit to Clover that he is not being paid for his labour. This admission registers on Clover’s face so sharply that with no dialogue necessary, we understand that Clover only now recognises how desperate things have been for her family.

Though this is an impressive debut, the film is marred by too much expository dialogue used to explain the family background. The father/daughter estrangement following (as we are told) the mother’s death too neatly parallels the brother’s death. There are patterns in people’s behaviour, of course, and one of the points of the film is to highlights the unhealthy mixture of denial and guilt in this family’s. But we are told more than we are shown. For example, the film does not explore Aubray’s various accusations about Clover’s distancing patterns, while we obviously do not see Aubray before or at the time of his wife’s death.

The mystery of the suicide enables us to put all the pieces into place, and the dramatic climax is beautifully acted and directed, even if you have been preparing yourself for something weightier. Though some may find the climax cathartic, others might leave their seats feeling emotionally short-changed.