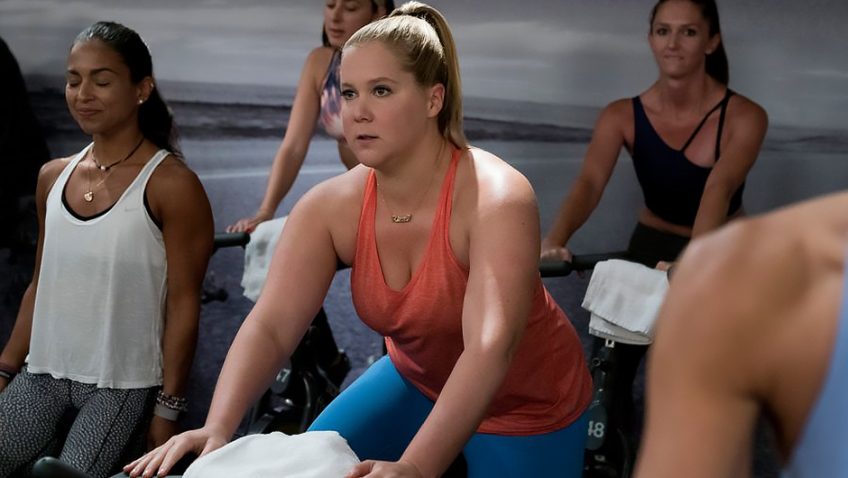 Amy Schumer has distinguished herself amongst the majority of A-list comediennes by not dieting herself down to a size 4 and not using size as the source of her comedy. In I Feel Pretty Schumer is a pathologically self-conscious and insecure, single, 30-something, large-size loser. She hits her head and awakens to the see in the mirror the image of a thin, beautiful, confident, go-getter. The concept that the transformation is in her head might be obvious and clichéd but, in this age of airbrushed photos and anorexic Instagram addicts, it could not be more important and timelier. It’s just a shame that the message is not better served by its vehicle. 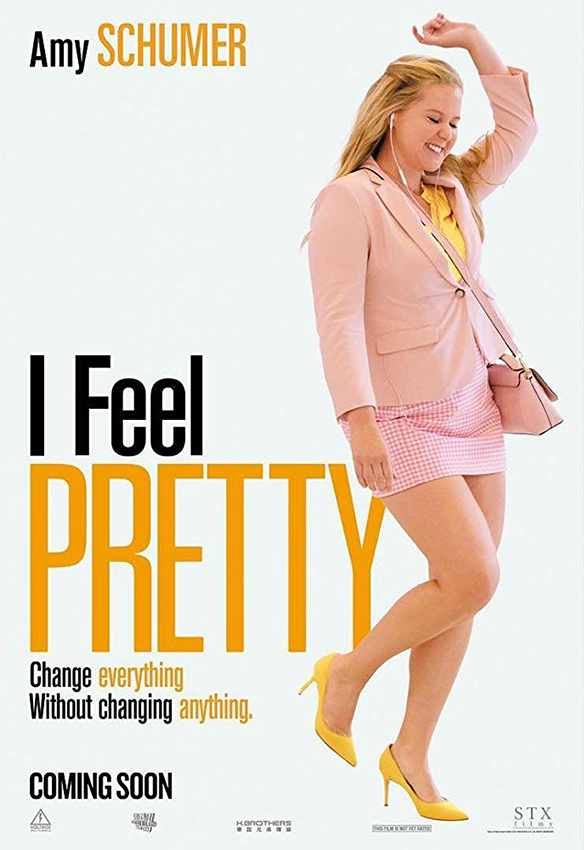 If Renee Bennett (Schumer) joined your gym she would blend in perfectly and she’d have a better choice of clothing in most of our high street shops than the size 4’s who find their size in short supply. But this is a Vogue-eyed view of NYC where a boutique saleswoman takes one look at Renee and tells her, ‘our sizing here is limited, but you can probably find what you want online.’

Her first visit to SoulCycle does not go much better. Everyone in her spinning class looks like a model and has small feet. Further humiliation follows when Renee’s cycle collapses under her weight – though the seat was not properly secured.

As one of two website maintenance workers toiling away in the depressing, off-site basement of Fifth Avenue cosmetic giant Lily LeClaire, even Renee’s obese, nerdy colleague Mason (Adrian Martinez) won’t engage in banter let alone ask her out. Then one day, when the computer crashes, Renee must summon the courage to travel to the glossy skyscraper on Fifth Avenue to hand deliver a report.

If Renee is wowed by the atmosphere and star struck after spotting cosmetic’s boss Avery LeClaire (Michelle Williams, terrific) in her stylist designer dress, the average 15-year-old watching the film might be, too. The film is shot by Florian Ballhaus, the cinematographer of The Devil Wears Prada, which, in part, this film resembles.

The trouble with this type of message film is that there is a risk that all the younger viewers will remember are the glamorous skinny models in a glamorous office rather than anything else. There seems to be nothing between a supermodel and an insecure size 14 who lives alone in a dark bedsit and works in a basement. In any event, at Lily LeClaire Renee learns about a job opening for a front of house receptionist. She longs to apply, but dares not entertain the thought. 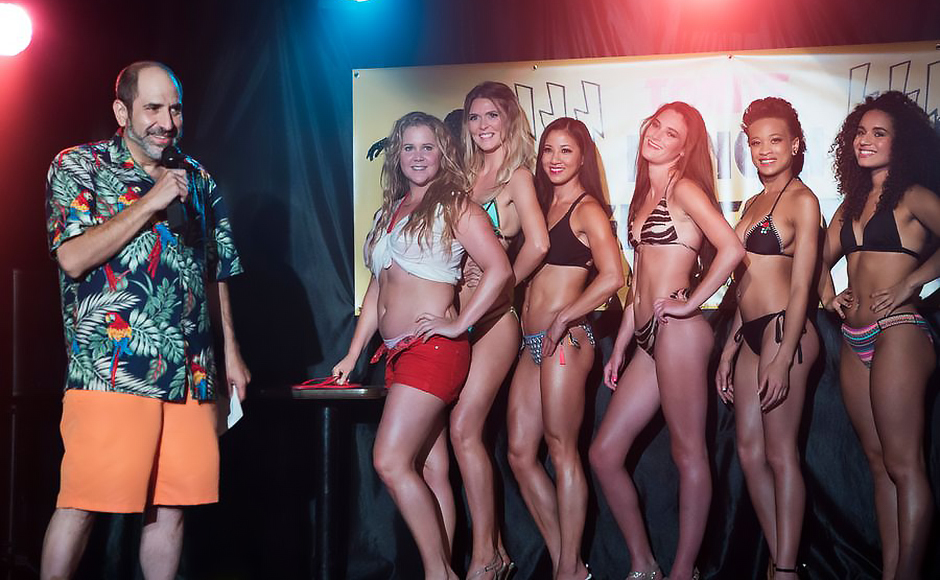 Amy Schumer in I Feel Pretty

All that changes, however, when Renee falls off her cycle again and this time hits her head. Oddly, SoulCycle do not call a doctor or ambulance although Renee passed out. But when she comes to and looks in the mirror, she sees her ideal of the perfect woman. Renee is too self-obsessed to notice that no one else sees the physical change and her self-image informs her new relationship with the world around her.

It doesn’t hurt that, unbeknown to Renee, Avery’s wise grandmother Lily Leclaire (former supermodel Lauren Hutton), wants the head office receptionist to reflect the everyday woman who is buying their new Diffusion Line. Unlike their snobby high end products on show at Sakes Fifth Avenue, the Diffusion Line will be sold in discount chain stores like Target.

Avery, whom Renee worships, is, in reality, self-conscious about her tiny, wispy voice, and insecure about her business acumen (despite having graduated from Wharton Business School). Here’s the same message, inversely told, but Renee cannot see that either. Avery is astonished at Renee’s inflated self-confidence and positive self-image, but hires her for the ‘ordinary shopper’ look that her grandmother wants. 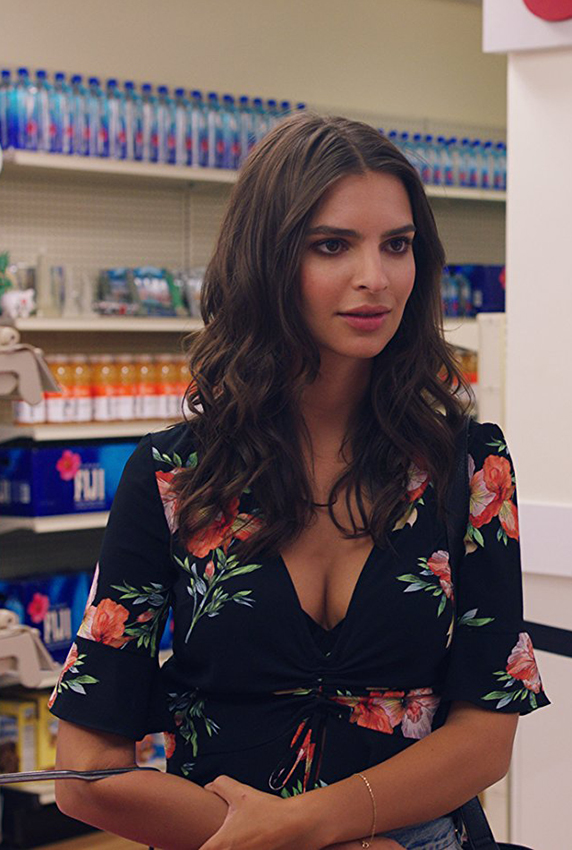 Emily Ratajkowski in I Feel Pretty

Positive self-image breeds success and success breeds success as everyone likes a winner. This is a good message too, and it’s hammered home as Renee picks up conveniently single Ethan (Rory Scovel) at the dry cleaners in one of the best scenes in the film. Refreshingly, and on message, Ethan is not Mr Rich or Mr Handsome, but a rather shy and insecure guy waiting around for a promotion to cameraman in CNN (so he has potential). Ethan is at first, put off by Renee’s aggressive nature, but won eventually won over by her self-confidence, not to mention he bedroom manner.

Renee’s natural dynamism at the front reception; her oratory skills and valuable perspective as the customer who actually shops at Target make her indispensible to Avery. Avery promises Renee the title of VP of the Diffusion Line on the way to the product launch in Boston. For the fairy tale to work, we must believe that a huge corporation has neglected to do market research, hire consultants, or employ decent brand managers to launch a radically new brand.

Before hitting her head, Renee made a wish in a fountain that seems to have come true. But it takes a while longer for Renee to realise that all of her newfound skills were already inside her and have nothing to do with her physical appearance.

The film becomes rather flabby and unfocused in the middle when we are presented with the typical downside to the new Renee. As she neglects her two girlfriends who valued her for who she was, she also neglects Ethan, when her head is turned by Avery’s playboy model brother Grant (Tom Hopper). Grant is captivated when he realises how this ordinary, size 14 woman is transforming his family’s company.

The real problem with I Feel Pretty is that it is not funny, although everything points to I Feel Pretty being a comedy. Writing duo Abby Kohn and Mark Silverstein (who wrote the pointless, He’s Just Not That Into You and the vapid chick flick, How to be Single), have turned directing duo and the direction is as flat as the writing. It is not Renee’s looks, but all the gags falling flat that are the real source of embarrassment. In films like Trainwreck and Snatched, Schumer plays women with high-powered jobs and a rich social life whose surmountable flaws have a lot to do with her personality and little to do with her weight. Schumer has already persuaded herself – and us – that she has what it takes to succeed.