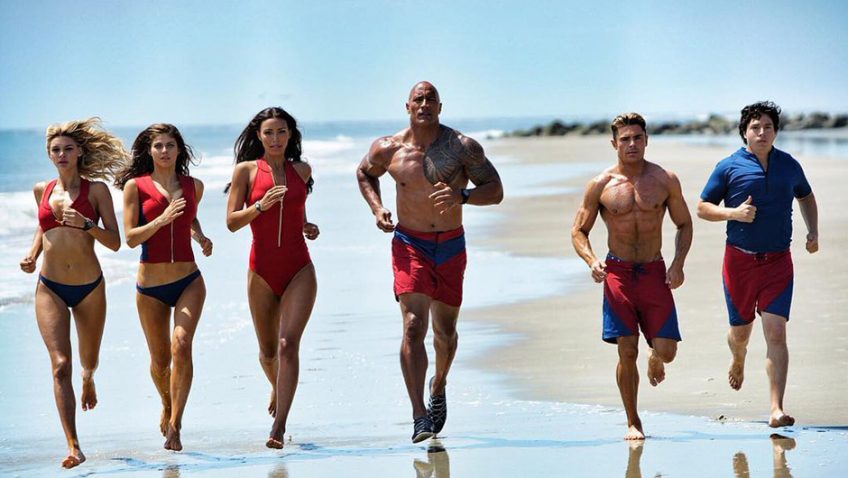 is, as you might have guessed, a feature film spin-off/spoof of the popular television series, but it is certainly not an inevitable one. A year after Wall Street’s Black Monday, but just over a decade away from the attack on the World Trade Centre, Baywatch hit the right note in terms of escapism. Girls in swimwear who looked like no one you lived or worked with worked alongside tanned, handsome, muscular lifeguards on a sunny beach for the greater good. There was even a feminist agenda: the girls weren’t just bimbos in scanty bikinis, they saved lives for the accident-prone public on L.A. beaches.

Most people haven’t thought about the TV series in years, and Australia’s Bondi Rescue cannot be said to fill the gap, despite occasional guest appearances from David Hasselhoff and Zac Efron. Baywatch was a guilty pleasure while it lasted, and it lasted (in syndication) 11 years, playing in 140 countries putting Hasselhoff in the Guinness Book of Records as the Most Watched Man on Television. Today, however, even its fans, who are now on average between 30 and 60, have moved on.

Still, there lingers enough nostalgia and curiosity for those who knew the original television series to create an audience for the film. There might even be some interest from teenagers (the film has a 15 rating) as the humour, if that’s the word for it, comprises gags and jokes about a rookie lifeguard’s struggle to keep his manhood visibly indifferent to the attractions of a particularly curvaceous female colleague.

While there is an audience willing to embrace the feature film and cut it some slack, it will be difficult to feel warm and nostalgic about the new film Baywatch

, directed by Seth Gordon with a team of writers behind him.

The plot is familiar enough. Zac Efron plays Matt Brody, an Olympic two-time gold medal winner who disgraced himself with drunken escapes, and was filmed vomiting in the pool. As a PR stunt to rebuilt his image and bring in some money for the local council, he is coerced into trying out for the elite Baywatch team. As in most of his recent films, Efron plays a conceited pretty boy whose obnoxious, condescending manner is really masking self-doubt and insecurity. As in Bad Neighbours, Bad Neighbours 2 and Dirty Grandpa, he has to be dragged down to size to learn humility, and the here the filmmakers revel in teaching Matt a lesson. At times, it goes overboard (pardon the pun) and resembles a Stalinist reconditioning regime. The man charged with getting Brody reading for lifeguard duty is Mitch Buchannon, (Dwayne Johnson) head of the Baywatch lifeguards. There is instant tension between Matt and Mitch, who sees Matt as an egotist who will not work as part of a team. Ironically, Mitch is on an ego trip, too, although this is not satirized nearly as much as it could have been. Garner Ellerbee, (Yahya Abdul-Mateen II) plays the local cop who is always mocked by Mitch when he reminds Mitch that the lifeguards have no jurisdiction over the bay when it comes to police work.

The plot introduces the new recruits for the team and the interpersonal relationships between them. Matt is attracted to new recruit Summer Quinn (Alexandra Daddario) , but when he thinks she will throw herself at him like his swimming fans he’s very wrong. She cannot even tolerate his eyes wandering down to her chest. (It goes without saying that cleavage designed for the female lifeguard’s front zippered, high legged bright red suits is as much a requirement for the job as is teamwork, fitness and stamina. The cheesiest relationship, though is that of new recruit Ronnie (Jon Bass), an overweight beach disco dancer who is helplessly, and, he thinks, hopelessly, in love with babe CJ Parker (the model, amateur golfer and now actress Kelly Rohrbach). No one wears the red Baywatch swimsuit quite like CJ. That said, you’d think that, even if the zippers were rust-proof, they would be a health and safety hazard.

Regardless of their differences, the team has to come together to solve the mystery of the drug parcels washing up on the beach, and a dead politician. Suspicion turns to Victoria Leeds (Priyanka Chopra), the new owner of the Huntley Club who will stop at nothing to eliminate opposition to her goal of owning the entire Bay.

While the television series focused on saving families from surfing accidents, drowning and shark attacks, the only real rescue of innocent tourists comes at the beginning. The big rescue set piece occurs when Leeds’ yacht catches fire. Mitch and his team replace the Coast Guard, the police, fire-fighters and paramedics to save the women (believed to be drug mules) in the boat.

If you are going to release a movie that sends up a popular television series, you had better be cleverer than the series, or at least have something to send up. The series tried to play it straight, but there was a definite self-awareness that it was already camp, though never to such an extent that it disconnected the audience from the appealing lifeguards.

The characters here are not particularly appealing, and there is no chemistry in the Johnson/Efron pairing, or, in fact, in any of the relationships. If the writing is lacklustre and the characters shallow, better directing might have helped. But Seth Gordon delivers the same cheap humour and stunts as he did in Identity Thief, while failing to capture the essence and appeal of the original series. Even a depressing cameo from Hasselhoff and an even more fleeting one from Pamela Anderson cannot keep Baywatch