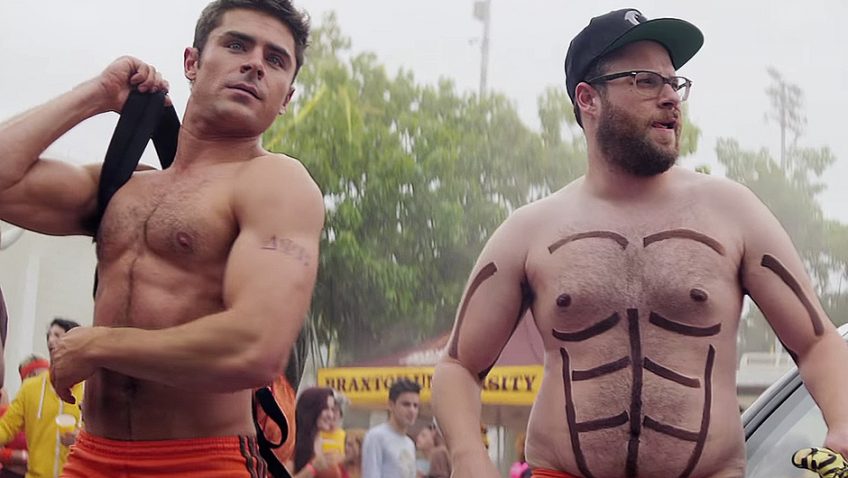 Tiresome pranks and humour that produces the occasional smile

Every one of us has, at one point in our lives, had a bad neighbour.  It follows that all of us will feel some connection with thirty-something couple Mac (Seth Rogen) and Kelly (Rose Byrne) Radner when they find the rowdy sorority that has moved in next door to them, will jeopardise the chain sale of their home and their move to the suburbs.  The matter of empathy is, ironically, a major problem.  Will anyone who is in, or has been in the Radners’ position be able to laugh at Bad Neighbours 2

?  Even if the answer is no, the reason to see Nicholas Stoller’s sequel to his 2014 Bad Neighbours, is Zac Efron, an actor whose career has gone off track to such an extent that a bit of real life angst might be discernible in his moving performance as Teddy Sanders, a fraternity man who cannot move on with his life.

In Bad Neighbours the Radners were young parents with one foot in the future and one foot in the past; still nostalgic for their own reckless, carefree college days and reluctant to face the responsibilities of the real world.  Now, with a mortgage, a three-year-old and another on the way, they are ready to embrace adulthood.  They have secured a buyer for their home and have a chain purchase on a new home in the suburbs. During the 30-day escrow period, however, the buyer can show up at any time and change his mind about the purchase.

The matter of an undetected damp patch notwithstanding, the escrow wouldn’t be a problem, except that marijuana-smoking Shelby (Chloë Grace Moretz, Carrie) and her Kappa Nu sorority sisters Beth (Kiersey Clemons) and Nora (Bean Feldstein) have moved into the empty Delta Psi fraternity house next door to the Radners.  These new suffragettes are rebelling against a sexist system that bars sororities from throwing their own parties.  Fired up and high on their newfound independence, they callously ignore the Radners’ pleas to keep down the noise for a mere 30 days.

So we have an often tedious repeat of the original film with wild parties and tit-for-tat battles between the boring girls and the ‘old people’ next door. The script, by the original team of Andrew Jay Cohen and Brendan O’Brien, goes overboard on several occasions with unamusing racist and anti-Semitic jokes and attempts to dream up new pranks.   In one particularly silly sequence Mac travels to Sydney, Australia, not questioning the messages on his phone that has been commandeered by the sorority girls. The marijuana heist plot to raise rent money is equally laboured. The script does develop the role of Teddy, adding a surprising element of pathos and social insight to the mindless, comic turmoil.  As president of Delta Psi Beta, college senior Teddy (Efron) was the male stallion who orchestrated the battles with the Radners in Bad Neighbours. At the end of the film, we see him putting a brave face on his new job as a shirtless head of house man at Abercrombie and Fitch.

At the beginning of this sequel, Teddy is complaining that his employers are insisting that he wear a shirt, a move that may jeopardise his major selling point. Still clinging on to the dead-end job for which he will soon be too old, Teddy is struggling to find common ground with his former frat brothers, who are now in responsible jobs and/or getting married.  To add to his disillusionment, Teddy discovers that his best friend, Pete, (David Franco), the fraternity VP, is gay and planning a gay wedding. Desperate ‘to be loved’, and for a roof over his head, Teddy offers his services to the sisters of Kappa Nu.  As the undisputed king of party planning and former leader of a battle against the Radners, he is eminently qualified for his new consultancy job.

Soon, however, the age divide begins to irk the sisters who find that Teddy is closer to the ‘old couple’ next door than to their rebellious spirit and they dump him. Humiliated and hurt, Teddy switches camp, and starts to work alongside the Radners who offer to put him up in their embattled home.

Teddy, with a second-class degree, a criminal record from his frat battle days, a dead-end job and a fading social support network, still has to find his place in the world.  The end of the film shines some light at the end of the tunnel as Teddy sees a potentially constructive direction for his talents.

Amidst the raucous tit-for-tit battles, there are a few enjoyable and insightful scenes. These include an appeal to Shelby’s helpless father; Kelly’s attempt to bribe college dean Carol Gladstone (Lisa Kudrow, making a welcome return, albeit in a smaller role, from Bad Neighbours) to intervene in their struggle; and Kelly’s touching sister-to-sister pep-talk to the sisters. Kelly buries the hatchet long enough to dissuade them from abandoning their fight for sexual equality and their youthful ideals.

For, finally, the girls realise that, in their desperation to raise money by increasing membership, they have been partying on the boys’ terms playing. They have become the very objects of sexism that they were rebelling against.

Unfortunately, there is a disconnect between the perceptive social commentary strand and the rest of the film which is weighed down in tiresome pranks and humour that produces the occasional smile rather than real laughs.  And the central question, unanswered in the original film, persists: where are the other neighbours and why aren’t they, too, affected by the anti-social behaviour?