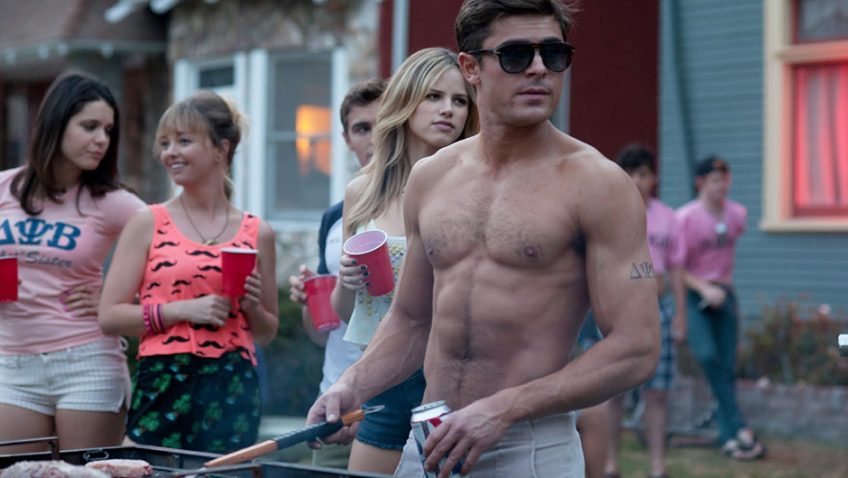 is being heralded as the funniest comedy since The Hangover. It does co-star the most adorable twin baby girls since The Hangover and boasts a number of laugh out loud gags and lines, effortlessly delivered by Seth Rogen, Zac Efron and Rose Byrne, who work well off of one another.

But the humour from the Judd Apatow-school-of-vulgar-lads-jokes is no funnier here than it was in last year’s This is 40, while the film revolves around a premise so implausible that you wonder why it wasn’t returned for a rewrite.

Thirty-something couple Mac (Rogen) and Kelly Radner (Byrne) realise they are finally grown ups. Instead of embracing the future, however, they look back nostalgically to their carefree single days, before the responsible job, the big house and mortgage and the new baby.

When they are offered last minute tickets to a concert, they try to have their cake and eat it, too by bringing along the baby. ‘This could be the doorway to a whole new life. Have a baby and have fun,’ Mac rationalises before they end up missing the concert due to all the baby paraphernalia they have to pack up.

A chance to recapture the past and ignore the milestones in their lives comes in the form of Fraternity Delta Psi, when dozens of loud party animals from the local university move in next door. Worried about the effects of sleepless nights on the baby and on Mac’s job, Mac and Kelly pay the fraternity a visit to nip the problem in the bud.  Their strategy is to be cool and hip but firm in resolve.

They are disarmed by a gorgeous young hunk named Teddy Sanders (Efron) in full charm offensive mode and before long the couple are partying along with the Frat boys.  But when the noise becomes relentless over the following days and nights, Mac breaks his promise to Teddy and calls the police, incorrectly assuming that the dumb local cop would never mention their name. Teddy declares war.

For anyone who has had bad neighbours, the war between the Radners and the fraternity is anything but funny and it takes a toll on the couple’s life and marriage. The Radners’ strategy is to ensure that the fraternity violates its probation by convincing them that the probation has been withdrawn, and then helping them throw the wildest party in the frat’s history. The Radners talk too much, however, and don’t count on an abused frat member betraying their trust. When Teddy catches on and retaliates by planting airbags in the house, car and office, the Radners show that they are not too old to fight dirty.

Working from a script by Andrew Jay Cohen, Brendan O’Brien, Nicholas Stoller proves once again, as he did in Forgetting Sarah Marshall and Get Him to the Greek, that he can direct comedy. Unlike many comedies, this one is good for some genuine laughs and has a good moral.

Without giving away the outcome of the war, it’s safe to say that all partying and no studying make Teddy a loser; after graduation Teddy ends up as the doorman for Abercrombie and Fitch. That being said, the writers’ portrayal of the girls who frequent the house is misogynistic.

The problem with the Bad Neighbours

is that we have to believe that (a) this party fraternity would be given permission to move into an upmarket residential neighbourhood; and (b) the Radners would be the only family disturbed by the fraternity’s constant, loud noise. We are asked to accept, but cannot, that all the other families could be bought off with Teddy’s charm and the promise of some free odds jobs.

But this is clearly a neighbourhood of either retired people or middle-class, families with small children who have to get up for school and do homework and husbands who would move the earth to commute into the city for work. Far from accepting their new neighbours, the entire street would support the Radners in a law suit against the university or the council.