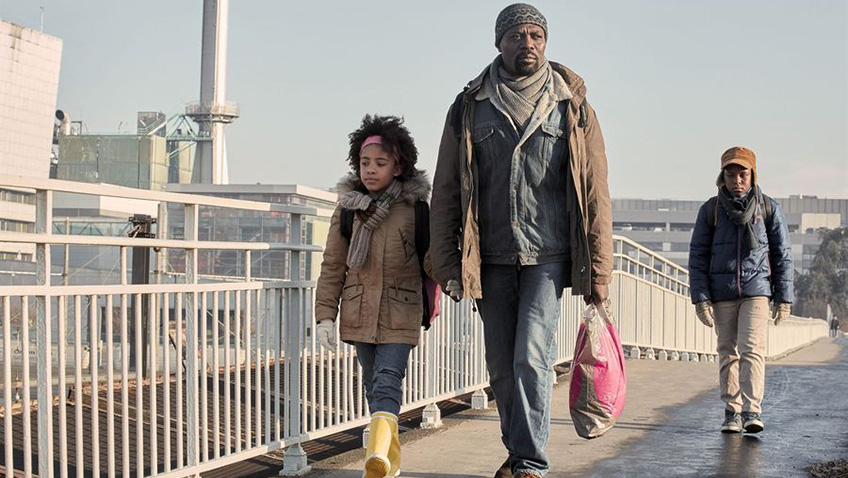 Writer/Director Mahamat-Saleh Haroun’s most well known films, Adouna (2002), A Dry Season (2006) and A Screaming Man (2010) tell stories about the civil war in his native Chad, the horrors of which might lead its people to emigrate. A season in France

is another powerful and engrossing drama about the African experience, told with compassion and striking authenticity. This time, however, a family from the Central African Republic (CAR) has fled to France where they live in limbo while awaiting political asylum.

Inspired by a 2014 news story in which a failed Chadian asylum seeker set ﬁre to himself at the CNDA (National Court for the Right of Asylum), the title might have been inspired by Arthur Rimbaud’s famous autobiographical poem A Season in Hell, as the protagonist, Abbas (Eriq Ebouaney) was a French teacher in his native country. CAR, now the unhealthiest country in the world and among the ten poorest despite its mineral wealth, was a French colony, but the French take no responsibility for the chaos and lawlessness that they left behind.

As a riveting picture of a man up against the system, there are similarities between A season in France

and I, Daniel Blake, but the style, writing and degrees of nuance are so different, it is not a comparison that is immediately apparent.

In a subtle and sparse narration, Abbas’s eleven-year-old son Yacine (Ibrahim Burama Darboe) tells us that the family fled Bangui (the largest city CAR) nineteen months earlier but their mother was shot dead by the militia. In those nineteen months, Abbas has moved his family into a small, but decent, rented flat on the outskirts of Paris, found a job and a girlfriend, and enrolled the children in school. But Abbas, who is an educated man with a respectable job in his country, has to prepare breakfast for the young children who are still sleeping when he leaves home to unload truckloads of vegetables and help sell them in a large produce market.

Work is made bearable thanks to florist Carole (Sandrine Bonnaire), a middle-aged Polish immigrant from an earlier wave of immigration, who speaks like a native (as does, somewhat improbably, Abbas and the children). A warm, generous and attractive woman, Carole is aware that Abbas has nightmares and visions of his wife, but encourages him to look ahead for his sake and the sake of his children.

Abbas has come to France with his brother Etienne (the Central African musician from Bangui, Bibi Tanga), a former philosophy professor who now works as a security guard for a shop. Although Etienne has a girlfriend, Martine (Léonie Simaga) with a relatively luxurious flat, he lives alone in a tiny, squalid lean-to shed in a waste-land next to a motor way, and is severely depressed, at one point admitting to Martine that he is impotent.

Impotency is both a physical affliction that apparently affects many traumatised immigrant men and, in the film, a symbol of the general weakening of the spirit. This might explain why Abbas, who has no fight left in him, does not follow Carole’s advice when his appeal is rejected. 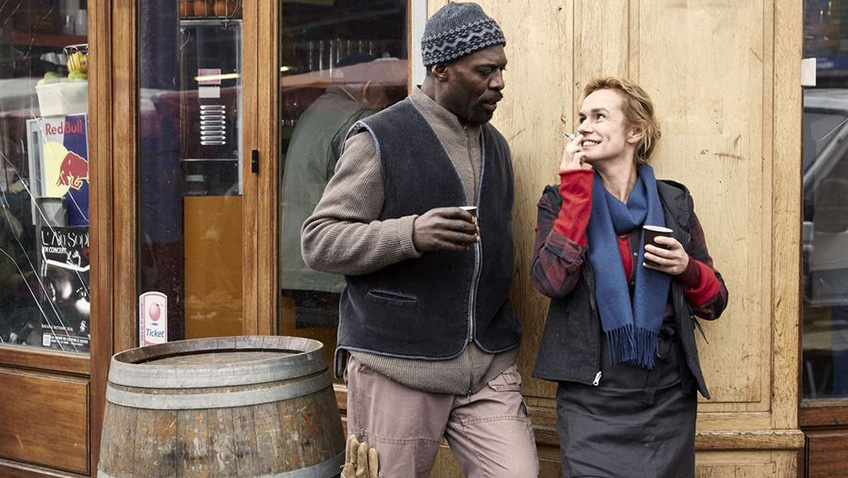 Sandrine Bonnaire and Eriq Ebouaney in A Season in France

The action in the film takes place in the final three (winter) months of Abbas’s long wait for a decision. When Abbas loses his job, he is forced to move his children to a dismal studio apartment in a noisy building where he lives at the mercy of a slum landlord. Abbas insists the children do their homework, makes light of their complaints about their diet of omelettes and tries to keep their spirits up while his own are at a low point. Abbas’s eight-year-old daughter Asma (Aalayna Lys) asks him to sing her a lullaby that her mother used to sing, but he is so off-key that father and daughter laugh through their tears. In a nice touch, we see them fall silent and listen to their mother (Cameroonian jazz singer Sandra Nkaké) singing the song (which was written by Bibi Tanga) properly, as they remember it.

While Haroun stages various stages in the asylum process, including the self-immolation scene in the CNDA (Cour nationale du droit d’asile / National Court for the Right of Asylum) his purpose is not to vilify a particular stereotyped civil servant or system as was the case in I, Daniel Blake. Haroun, who has lived in France since 1982, shows how quickly Abbas is able to assimilate and establish a life for his family and integrate with his white co-workers.

But both Abbas and Etienne know that they will always be second class citizens, even if they obtain their papers. And while most French people are civil, Etienne suffers direct anti-migrant abuse in a heartbreaking scene, while Abbas, a model employee, is sacked (rather improbably in my view) on the spot for one indiscretion, as he has no employment rights.

It is curious that we never see Abbas consulted with or represented by a lawyer from one of the human rights and refugee groups working in French to help asylum seekers with the bureaucracy. It could be that Haroun wants to avoid personalising the ‘system’ on both sides. The interface between Haroun and the system, however is not messages from a charity but the official government letters that seal his fate.

If not all of the performances are as strong as they could be, Eriq Ebouaney (Ridley Scott’s Kingdom of Heaven, Brian De Palma’s Femme Fatale, Raoul Peck’s Lumumba and Clare Denis’ 35 Shots of Rum) and Sandrine Bonnaire (Claude Chabrol’s La Cérémonie, Maurice Pialat’s Under the Sun of Satan, Agnès Varda’s La Vagabond) give mesmerising and convincing performances, although at times Carole seems too good to be true.

Though Haroun leaves us with hope – the strength and the hope a father has to have for the future of his children – it is Carole who has the last word, and her words are silent. But the expression on Bonnaire’s face; and the look in her eyes as she surveys the vast empty site of the flattened former Calais migrant camp is unambiguous and invites the viewer to stand alongside her asking the same unanswerable questions.