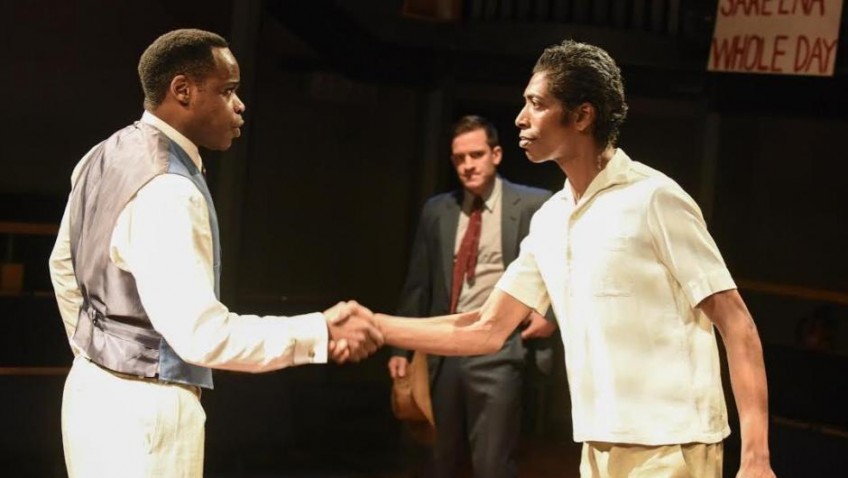 Mustapha Matura’s satire on Trinidadian ethnicity and politics was produced at the Royal Court in 1974 and won the Evening Standard Award for Best Play. It then transferred to the West End. Paulette Randall’s production is its first major revival since then.

Play Mas is set in Port of Spain in the 1950’s just before and just after Independence from Britain. It opens with some simple comedy between an Indian tailor (the exuberant Johann Myers), a great film fan, and his naive, likeable African apprentice (Seun Shote).

The apprentice, who constantly has to do menial tasks for the tailor’s mother, gets the sack when he decides to attend a political meeting.

The roles are reversed after the Independence when the apprentice becomes Head of Police. His character, however, during the state of emergency, remains comic and his transformation into a dictator, capable of murder, never convinces.

This is the fault of the writing rather than the performance of Seun Shote who remains true to his character.

The apprentice is, in fact, at his most frightening when he is merely play-acting during the actual “play mas” (the Trinidadian carnival masquerade). Dressed up in full uniform and pretending to be a guerrilla, he brandishes a rifle. The tailor and his mother think he is being deadly serious and fear for their lives.

The time lapse between the first and second act could be made clearer and the ending needs to be sharper. The audience needs to be more fully aware of what is actually going on under cover of the play mas(querade).