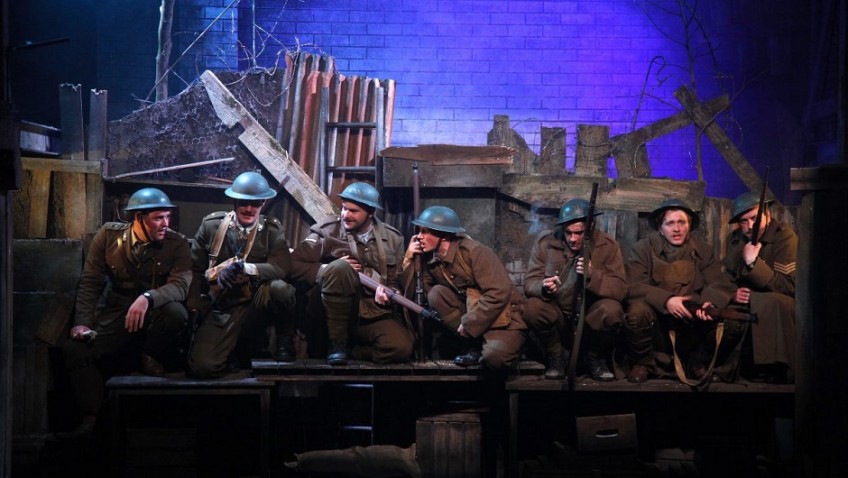 Bringing the humour out of the trenches

Up to your neck in mud, facing death at any minute in a WWI trench, what do you do to help stave off the horrors of grim, grisly reality? Come up with desperate jokes, pathetic poems, cunning plans and scything, cynical humour like Blackadder and Baldrick? But they’re fictional, of course. Captain Fred Roberts and Lieutenant Jack Pearson, though, were real soldiers of the Sherwood Foresters, who did some of the very same.

In fact, they went further still, sharing that teenage schoolboy (/schoolgirl) humour far and wide, spreading priceless sunshine therapy to fellow, suffering, largely doomed soldiers. Only recently has the value of the pair’s considerable achievement been recognised, with due praise given to the daring lengths they went to for two whole years in compiling and printing regular copies of the rag-tag, rag-bag, rag-mag, satirical paper they called The Wipers Times (Ypres being far too French a contortion for an Englishman‘s tongue!)

Thanks to painstaking research and persistence over a decade and a half, Ian Hislop and Nick Newman’s eventual BAFTA nominated film of the story won a Broadcasting Best Single Drama award in 2014. The stage version is a triumph, too, and does full justice to the indomitable spirit and persistence of Roberts and Pearson.

There’s no mud onstage, but smoke swirls across the browns and greys of battered wood structures, brick, barbed wire and clutters of old boxes, desks and tin mugs as bombs whizz, thud and explode at intervals. In the trench’s dark, cramped claustrophobia, the men soldier on.

In this wonderfully structured, superbly enacted play, emotion drives the intimate story all the way, and the impact of gallows humour in the face of absolute horror is one that never wanes. As main instigator in spreading life-enhancing, wicked humour, James Dutton is perfect as Fred Roberts. Full of a wide-eyed enthusiasm that belies underlying angst, he has a quiet charisma and sunny smile that spread a warm glow through troops and audience alike.

George Kemp, too, is spot-on as sidekick Pearson, the two a close-knit team as they laugh together in the face of overwhelming adversity – adversity created not just by war and the Hun, but by their superior officers and the ladies of the Temperance Society, too, each ridiculously ignorant and oblivious to the realities of war. Sam Ducane worthily creates the humourless face of big brass ‘staff’ in Lieutenant Colonel Howfield while Dan Tetsell is strong and convincing as sturdy, loveable Sgt Tyler, as pompous Fleet St editor and as silly, cravat-wearing armchair journalist.

Cast members all multi-role beautifully. Eleanor Brown is any female from Nurse and loyal wife to treacherous Madame and misguided, interfering Ladyship. Meanwhile, at the drop (or grasp) of a hat, soldiers are music hall entertainers, elegantly choreographed prop shifters and tuneful singers.

The music is another fine achievement. Without once mentioning how far it is to Tipperary, composer Nick Green’s narrative folk-style ditties provide exciting, enlivening continuity through all the elegant scene changes, ensuring momentum never flags. Vibrancy is maintained, too, through a fine balance and variety of mood, style, pace and texture that blend with poignant moments, in which the grim, brutal, distressing horror of reality hits home. Based closely on The Wipers Times itself, terrible jokes, puny puns and poems abound, along with music hall skits, sketches and music (the barbed wire bedecked with light-bulbs, and blood-red lighting).

The warmth and camaraderie in shared laughter raises spirits and adds value to life. To make someone laugh is to do them a great service. This is the gift Roberts and Pearson gave their men, and for which they finally have their accolade. Thanks to Newman, Hislop and Green and their fine piece of theatre, the story of the soldiers’ lives and humour is spreading further still.