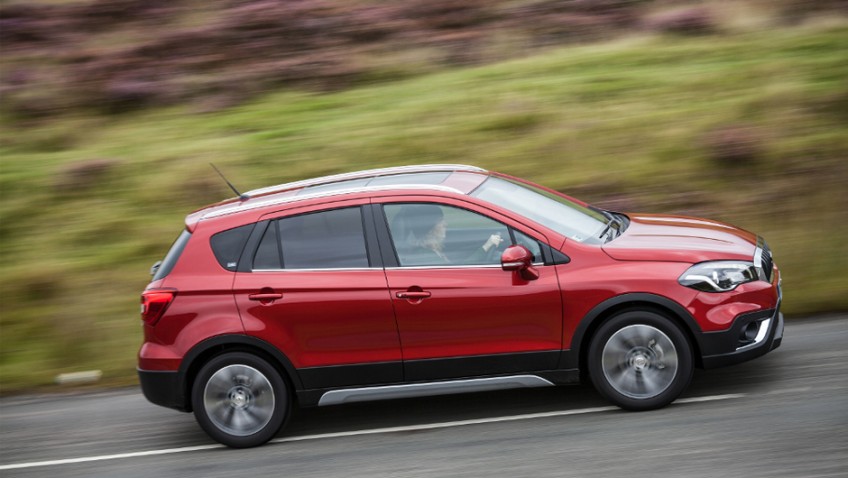 Suzuki’s S-Cross first went on sale in October 2013, and this latest version features a major facelift plus a move to the company’s very successful Boosterjet engines. To put some figures on the comparison between the new and old engines, the small 1-litre Boosterjet offers 9% more torque (i.e. ability to accelerate) than the outgoing 1.6-litre petrol engine, along with 10% better fuel consumption and 11% lower CO2 emissions.

Apart from the 1-litre engine, there are also 1.4 petrol and 1.6 diesel models. Whichever of the three engines you go for, there is the option of four-wheel drive as well; in fact the 1.4 petrol has 4WD as standard. It’s worth mentioning here that although 4WD cars are seen most frequently on London streets, there are motorists elsewhere for whom it really is essential in winter. It may be simply a matter of getting up a short un-surfaced drive to your house in the depths of the country; no problem in the months from spring to autumn, but occasionally impossible in the winter for a 2WD car. And yes, even without that need, drivers with grandchildren on board can feel a good deal safer and happier with maximum grip available to them. Suzuki call their 4WD system ALLGRIP, which for some reason is in upper case. It has four driver-selectable modes which are as follows:

Sport – is optimal for twisty roads. The system makes maximal use of four-wheel drive in accordance with accelerator inputs. At low and mid-range engine speeds, the system alters the accelerator/torque characteristics to optimise engine response and cornering performance.

Lock – is for extricating the car from snow, mud, or sand. A limited slip differential is fitted which helps brake any slipping wheel and transfer torque to the gripping wheels. The system distributes high torque to the rear wheels continually.

On conventional full-time 4WD vehicles, feedback control allocates torque to the rear wheels after detecting front wheel drive slippage. The ALLGRIP system also incorporates feed-forward control that anticipates slippage based on road surface, throttle opening position, steering angle and other factors. In summary, rather than reacting after grip is lost, it controls the vehicle to prevent grip from being lost, which results in greater stability.

Our test route was around the Welsh borders, so there was a good choice of road types on which to experience the car. I drove a couple of the engines, and found the 1.4 petrol to be the most user-friendly, and as mentioned above it comes only in 4WD form, so pricing for this one starts at £22,849; there is also the option of auto transmission here, which works out at a weighty £1,350. The performance of this engine is simply amazing for its size. Maximum torque is reached at just 1500 revs, and what that means is that you don’t have to be changing gear just to get up hills…..there’s ample power to stay in a high gear unless you’re ascending Snowdon, where the occasional change might be needed. Bearing in mind that it’s an easy and positive gear change, I’d say most users would be happy to save the £1,350, but on the other side of the coin the auto box has a consumption figure that at 49.5 is a mere 1mpg inferior to the manual transmission. The S-Cross features a long list of safety equipment that includes seven airbags, hill hold control, and tyre pressure monitoring system, as well as all the electronic wizardry that is now legally required, such as anti-lock brakes and Electronic Stability. If you opt for the top S-Cross model you also get Radar Brake Support. When travelling above approximately 3mph, if the system detects a risk of collision with the vehicle in front it warns the driver to apply the brakes.

At higher speeds if it senses the possibility of a collision it warns the driver with a buzzer and also a notification on the multi information display; the system warning can also be set for either Far or Near distance via a button on the dashboard. If the probability of a collision has increased, the system activates Brake Assist which increases the braking force during emergency braking, and if it determines that a collision is unavoidable it applies the brakes automatically. The system thus helps prevent collisions when the vehicle is driving at low speeds and helps reduce damage in the event of an unavoidable collision.

My test of the S-Cross didn’t use any of the serious stuff referred to above, but it did convince me that I’d be very happy driving one day in, day out. The facelift includes new headlights, changes to the front design, higher ground clearance, and internally a soft touch dashboard which certainly gives the interior a lift. In short, the new S-Cross is comfortable, spacious, attractive outside and in, and both easy and fun to drive.