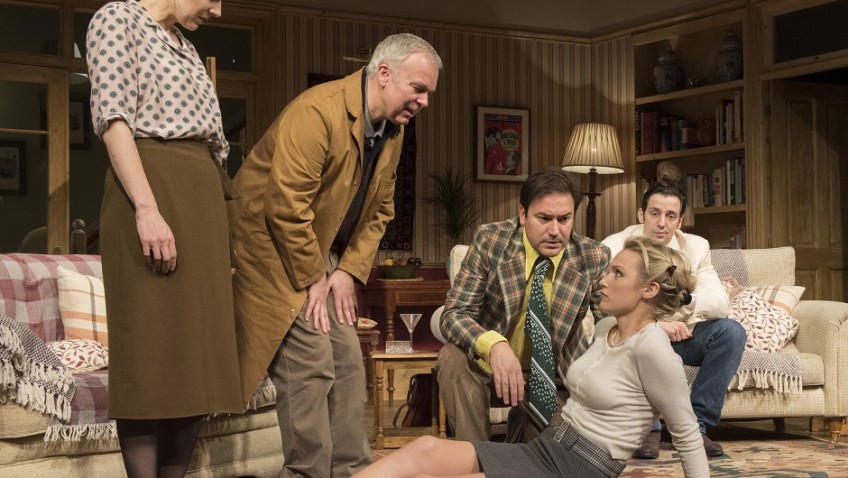 Humour is a funny thing. It is not always funny. I think a lot of audiences are going to be surprised at just how serious Terry Johnson’s play is.

It begins comically. Katherine Parkinson is just about to fondle the very naked Rufus Jones when the door bell rings

When I saw Terry Johnson’s play in 1994 an outraged couple, sitting in the second row of the stalls, stormed out of the theatre, loudly voicing their disapproval.

An elderly gentleman in the interval wondered why Westminster Council hadn’t closed the theatre.

22 years on, the audience at the very same theatre takes it all in their stride.

A middle-aged couple’s marriage is on the rocks. She wants sex. He doesn’t. He feels nothing for his wife. He doesn’t even want to touch her.

Like all the best comedy writers, Johnson is deadly serious. But I had forgotten just how nasty the dialogue can be. Audiences laugh; but what is said is not always funny. The dialogue can be very cruel.

They come together to mourn the death of Benny Hill.

The custard pie fight, expertly staged, is both hilarious and serious at the same time, no mean feat

Katherine Parkinson is the miserable and bitter wife, who, ironically, is the only person in the group with a sense of humour which she uses to vicious effect. Rufus Hound is the limp, smug husband who refuses to give her the child she so desperately wants.

Ralf Little is their impotent friend, who finds that his best friend has fathered his child. Emily Barrington is his dumb wife who thinks she has psychic powers.