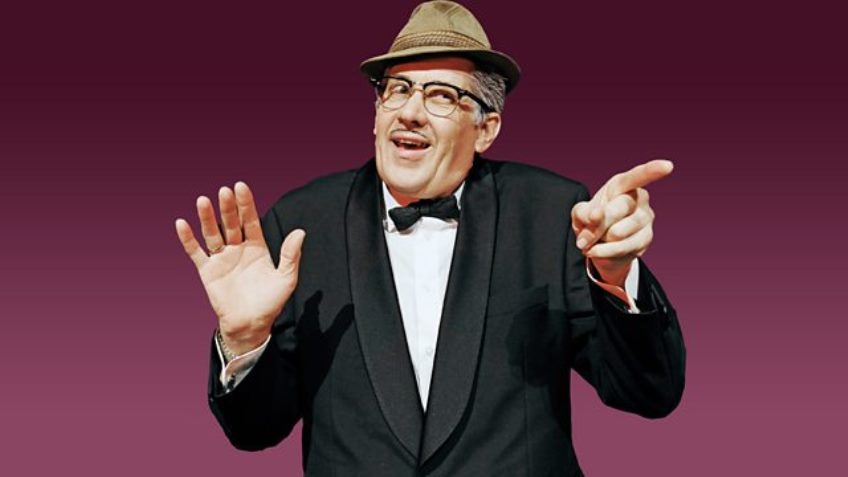 Since 2005 Count Arthur Strong has bumbled his own brand of barmy brilliance and laugh-out-loud-lunacy through eight radio series of sitcoms (plus four specials), taking the top radio honour of a Gold Sony Radio Academy Award in 2009. His sitcom graced our TV screens in 2013, and throughout the years the confused Count has taken his scriptwriter, creator and alter ego, Steve Delaney, onto stages here, there and everywhere else on regular tours. And still Count Arthur and his delirious delusions of granddad are going strong.

Now Arthur is not a man who doesn’t mince his words, that’s for sure! In fact, in the process of mangling words, the nutty eccentric also shreds sentences, scrambles syntax, perpetrates puns and mixes metaphors with nonsensical non-sequiturs like there’s no tomorrow is another day. Yet somehow, out of this meandering hopscotch (- er…hotchpotch) of incompetence emerges skilfully crafted comedy that has LOL written all over it. A clever script is, of course, behind every mangled moment as the optimistic Count stumbles along through his flights of fantasy, constantly tripping over the first thing (and every other thing) that comes out of his mouth, and forever going off at an unexpected tango …tangerine …tangent.

Traditional comedy tuba strains hail the gentle light entertainment style of the Count’s Radio Four show. With warm, laid-back humour, frivolous jollity and joyous silliness it brings to mind the likes of Harry Worth and The Clitheroe Kid. In Series 8, for our Angel Delight and delectation, previous episodes are repeated, in which Count Arthur, faded variety artist, is to audition (- or not!) for a part in Bedbugs and Drumsticks – in Posh Knobs and Dipsticks – in Groundhogs and Chopsticks – no, in Doorknobs and Matchsticks. Will he get it? Or might he be better sticking to Oedipus in Boots?

Count Arthur’s powerfully blithering, absentminded, grasshopper persona ensures no trace of Steve Delaney surfaces (we subsume!) as, aided, abetted, and often regretted, by a cast of ensemble characters who help propel the story, the befuddled, barmy, self-important old Count (who has bowels to die for) rants, rambles, rebukes, bumbles, boasts and complains, his words travelling like runaway trains, full-speed ahead in pompous, ridiculous, hilarious directions, to arrive at destinations that take us all – and him – quite by susprise. The Count’s chaotic language, like his mind, is forever in a twist again – like we did last summer, and when it comes to mistaking one word for another, he’s truly Coronation Streets ahead of the others. It’s definitely a case of, “Mrs Malaprop, eat my shirts!”

“This really is Uncle Tom Foolery at its arresting best!” as Constable Haywain might put it. “And who’d have thought that Joanna Lumley, like Barry Cryer and Lionel Blair, is also a qualified butcher?”

Catch the Count on BBC Radio 4 Friday at 11.30am, or on afterwards on Sounds.