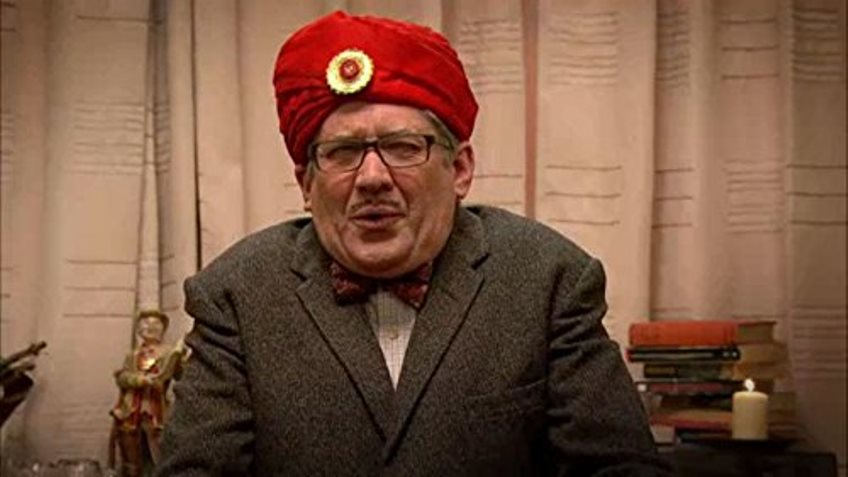 Still going strong as the undisputin master of English manglage, Count Arthur is busy again taking audiences on bumpy, meandering, linguistic journeys up the garden path to arrive at location, location, locations that take them, and him, entirely by susprise, and also, of course, leave them none the wiser. But they’re laughing all the way, sometimes until they cry (apart from odd ones who leave early when they find they don’t have the right frames of reference to buy into the barmy character).

Surrounded by seven frighteningly large pictures of himself and his name writ large in lights, the deluded old dodderer, in customary un-chic suit and Tyrolean titfer, staggers stiffly and totters tipsily about the stage. Befuddled, bothered and bewildered, he embarks, in this one-man showroom, on endless, disconnected, fragmented anecdotes, tirades and flights of fondant fantasies that have a loony logic all of their own, also throwing in (or up) tuneless songs, a spot of French “dancing”, some bungled ventriloquism and a bit of dressing up. His Elvis, King of rock-hard rolls, appears in dazzling white – in a judo suit, while Napoleon meets his Waterloo with Abba and a cacophonous squeezebox.

Continually confused, forgetful, frustrated and complaining, this ego-warrior is far too full of himself to notice: though words fail him, he never stops talking. Mangling malaprops, mutilating metaphors and strangling syntax from here to maternity, he creates a hilarity that’s nowt but bonkers as we travel from Elvis and his wife, Priscillia Queen of the Desert, via South Fork, Elvis’s brother JR and gunshots, to arrive, bizarrely, at the forever unsolved mystery of Jack Duckworth’s broken glasses on Coronation Street. Likewise, via Agatha Benny in Wales and Paul McCartney’s Mound of Car Tyres, we take in beheadings at the Tower of Blackpool, learn that Richard the Braveheart was played by Mel Giedroyc, that HRT Queen Victoria was forever proclaiming, “We are not aroused” and that Domestos labels are as fine as a Charles Dickens’ novel when you want a good read – oh, and that humans would be far better off if they all had dislocated jaws.

While washed-up thespian Arthur tells us all (or nothing) about, “Me and the man behind myself – who is also me,” Steve Delaney, the actual actor behind the dotty count, doesn’t come to the forefront for a moment other than in the genius wording of his script, in his superb comic timing and delivery, and in the charismatic charm he brings to this blithering, incompetent old fool. Meticulously articulate, Delaney has been performing and perfecting his alter egoist since the 1980s on the stage, in his TV sit-com and on his multi-award-winning radio show, yet still he finds time and energy to meet and greet after the show anyone as wants to be met and gret.

This show is, perhaps, slightly less slick and seamless than some of its predecessors but it’s still deeply, jaw-achingly funny, and for all langurs of lovage and/or lovers of language this makes for a wonderful night in… off!… out!