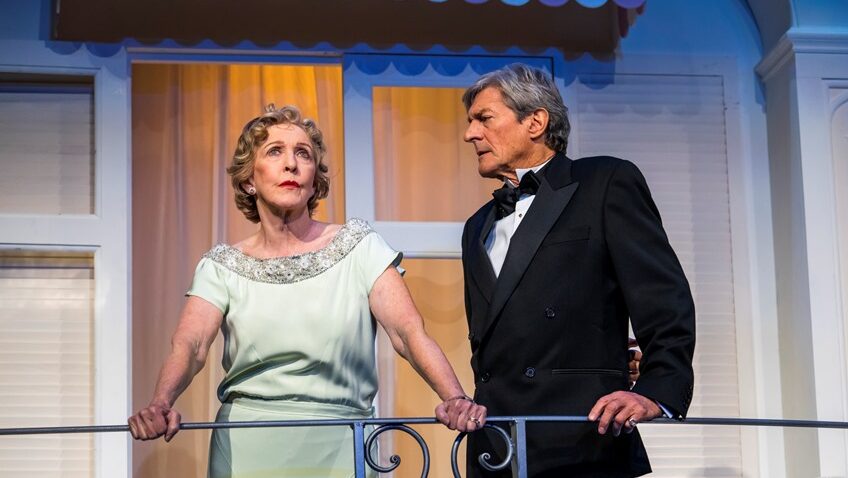 How many Coronation Street actors would be bold enough to take on the role of an elegant, suave, posh,1930’s charmer in a Noel Coward play? Well, this one’s so convincing you’d think he was born to it! It’s quite surprising, then, that Nigel Havers got busy courting Audrey Roberts on t’ cobbles of Corrie long before taking on this, his first Coward role. He’s now more than twice the age of his character, Elyot (originally played by Coward himself) just as Olivier award-winning co-star Patricia Hodge is more than double the age of Amanda, but it matters not. The audience breaks out in delighted oohs, aahs and woo-hoos as soon as they appear.

The pair have been friends a long time and have acted together on television but this is the first time they’ve enjoyed performing together on stage. Another first is that this is the opening production of The Nigel Havers Theatre Company, a company whose aim is to tour top quality “theatrical gems” around the country. Nigel and Patricia believe there’s a greater connection with regional audiences, and they’re generally more appreciative, too.

Since the play’s extra-marital goings-on were considered too risqué back then, its love scenes were almost censored in Coward’s day. This audience didn’t even blush. But they did gasp in genuine horror at the simulated face-slap and jaw punch and were amazed by all the smoking. Mostly, though, they giggled, charmed by the fast-paced, witty banter, and abundant, farcical silliness of situations, characters and sequences of events that, though far from believable, still reflect how absurd and preposterous humans so often are, even (especially) in real life. A lot of truth can be found in the ridiculous, especially when it comes to romance and relationships.

The charm and amusement of the play lie in the fun and humour created at each moment so good delivery is crucial, enhanced by a spot of wistful, airy Coward music, of course – Some Day I’ll Find You, A Room With a View. Havers and Hodge are Elyot and Amanda who divorced years ago, following a stormy, up-and-down marriage. Each is now on honeymoon with a new partner, Elyot with Sibyl (Natalie Walter) and Amanda with Victor (Dugald Bruce Lockhart). Out on their elegant, sunny, French balconies, it soon becomes horrifically apparent that the two pairs of honeymooners have ended up in adjoining suites. Enter mayhem.

There’s a most delightful, beautifully crafted symmetry to the first, short act. While Simon Higlett’s ornate balustrades, French doors, pretty, pink striped awnings and twinned balconies, set with white tables and chairs, create a sunny, symmetrical, seaside hotel, full of continental, elegance, the conversations and comedy work cleverly in mirrored parallel, too, as each pair of honeymooners pops out in turn on their balconies, like figures on a Swiss clock, and then in ever more complicated, farcical pairings and interactions. Acts two and three, in a luxurious Paris apartment, are more rambling as the love/hate relationships travel back and forth and round and round in repetitive circles, starting with passion, mutual admiration and sublime affection before moving through jealousy to shouting, bickering, verbal fireworks, then escalating into throwing vases and punches before returning to warm affection. It’s like life, then – repetitive, often tedious and frustrating, laughable, ridiculous, tempestuous,
grim and terrible, and exciting and wonderful.

The four actors work strongly together to charm the audience, who are all too keen to be charmed, while Aicha Kossoko as chatty, grumbling French maid Louise adds a welcome touch of je ne sais quoi to the show’s light entertainment mix of gentle merriment, farcical silliness and emotional explosion.

The show tours next to Oxford, Poole, Guildford, Norwich, Brighton and Nottingham.