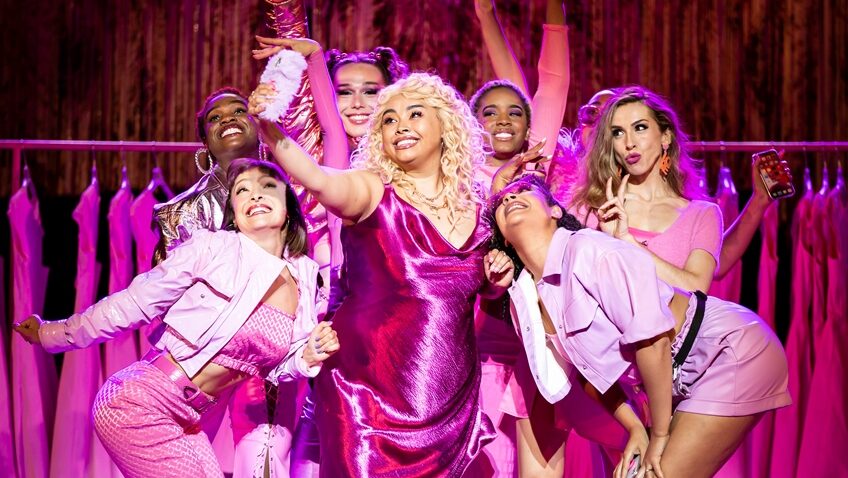 The theatre was chockablock with girls; and that’s how it should be. Legally Blonde is a deliberately silly and sentimental girly show about girl-power.

Amanda Brown’s novel was made into a film with Reese Witherspoon in 2001, which led to the Broadway musical in 2007. The music and lyrics are by Laurence O’Keefe and Neil Benjamin. The book is by Heather Hach.

The musical had its London premiere in 2010 with Sheridan Smith. Twelve years on, there is an update and Lucy Moss’s camp, kitschy, all squealing production is in the pink and when I say in the pink, I also mean literally in the pink.

The show is very loud. Infuriatingly, the singers have been miked in such a way that the witty lyrics in the ensemble numbers cannot always be heard.

A young man (Alistair Toovey), off to Harvard Law School, ditches his girlfriend (Courtney Bowman) because she is not serious enough. She pursues him to Harvard and turns lawyer. There with the help of a much nicer young man (Michael Ahomaka-Lindsay) she plays a key role in a murder trial and saves a wrongly accused person from going to prison.

The courtroom drama is funny and it has one of the show’s best numbers, Gay or European?

The casting is notable for its inclusivity, not only racially but also sexually, embracing all genders, all sizes and all shapes. And everybody is going to love the dogs played by humans.

But my guess is that canines and BARK, The Canine Union, will very soon be objecting that actors are playing dogs when so many dogs are out of work.

Courtney Bowman has a strong presence and belts out her songs with aplomb. Lauren Drew has a big impact on the audience. Michael Ahomka-Lindsay has loads of charm.

Ellen Kane’s choreography is extremely energetic. The high spot is Whipped Into Shape, sung by Nadine Higgins whilst she is actually rope-skipping at an incredible speed.

Legally Blonde has a mission statement and quotes Shakespeare no less: “To thy own self be true and it must follow, as the night the day, thou canst not be false to any man.”

The show is a lot of fun. Girls will love it. Carry on squealing.