Home / LIFESTYLE / REVIEWS > / FILM REVIEWS / In this impressive directorial and acting debut from Malta narrative is sacrificed to authenticity. 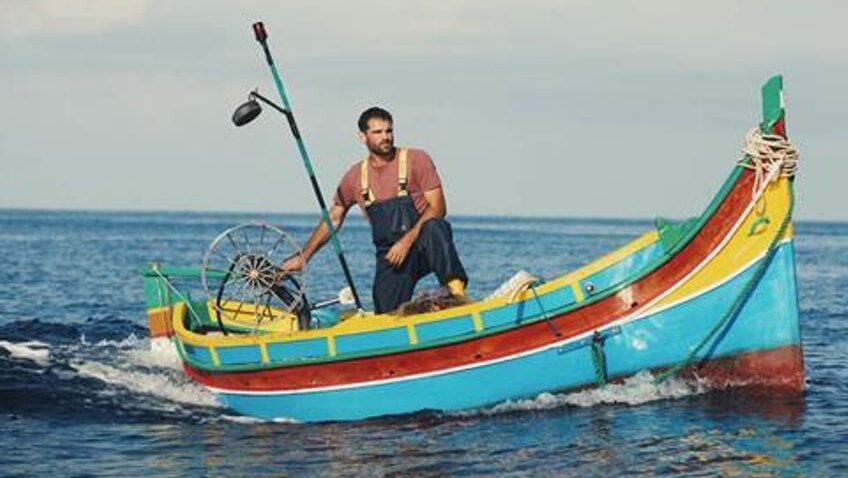 In this impressive directorial and acting debut from Malta narrative is sacrificed to authenticity.

Maltese-American filmmaker Alex Camilleri’s film Luzzu must be celebrated for its trajectory from the Sundance workshops to being Camilleri’s first feature film and Malta’s entry to the Academy Awards. The film is also the debut of two non-actors: real-life Maltese fishermen Jesmark Scicluna and David Scicluna, playing his cousin, also David. New writer-directors are advised to write about what they know, and while he knows about Malta, he knew nothing about fishing. Jesmark was there to teach him authenticity and it is the documentary-like fishing and boating scenes that will stick with you.

Jesmark’s (Jesmark Scicluna) traditional wooden boat (called a Luzzu) is so brightly painted against the blue Mediterranean sea that you’d think it is a tourist gimmick. But the handsome, thirtysomething fisherman has no relationship with tourists. His ties to his boat go back to his proud father and grandfather, and he is passionate about his simple line and net fishing. It is all he knows and Jesmark ekes out a living on the sea, selling fish to the local shops and restaurants.

This lifestyle, and his family, are his world, but to have a story you must have some obstacles. Jesmark is confronted with three at once that combine to threaten his livelihood, his marriage and his precious baby son, Aiden.

Jesmark’s catch is limited by EU legislation although from what we see in the first fishing scene, he only comes back with a couple of fish. There is mafia backed or black market forces at work in the market where he sells his fish at lower prices and in the sea where illegal catches are cornering the market. Jesmark also notices there is a hole in his boat.

At the same time, Jesmark’s pretty wife Denise (professional stage actress Michela Farrugia) has discovered that their precious new baby, Aiden, needs expensive medical attention). Denise comes from an upper-middle-class family who appear to disapprove of her marriage, and Jesmark’s inability to provide for his family is just proving them right.

For Aiden’s sake, he swallows his pride and allows Denise and Aiden to live with his in-laws who pay for the private doctor that Aiden needs to see.

Jesmark does not need the pressure that his wife exerts to realise he must figure out a way to provide for his family. Though torn, he decides to work nights on an illegal trawler. Soon however, the well-paid work takes over his life.

Léo Lefèvre’s cinematography gives us plenty of beautiful scenery, and the fishing scenes are so atmospheric they almost reek of fresh fish and salty, wet gear. But the fixation on the mechanics of Luzzu fishing slows down an already low key narrative, while scenes in which a hole in the boat is repaired require patience particularly as the narrative in the third section of the film is fuzzy

Nor is Jesmark’s dilemma completely convincing. The son’s medical condition proves to be a red herring, and, along with the Academy Award winning film Coda, we have to accept as given the problems Jesmark faces with red tape that supposedly affect the independent fishermen disproportionately. But in both films the reason for these limitations and regulations reflect the dwindling fish stocks and impact the future of all fishermen.

The goal of the EU’s Common Fisheries Policy of 1983 was to restore fish stocks to sustainable levels by 2020. Moreover, it is supposed to contain incentives and rewards for operators who fish sustainably like Jesmark and keep the catch numbers within the quota limits. If this is not the case, why is no one in the Maltese government speaking out, either from Jesmark’s group or for it?

The illicit competition Jesmark faces from the underground economy, which also contributes to dwindling stocks, price fixing and fraud, is a more immediate detriment but is one that affects the whole country, and the EU. Jesmark’s decision to join the enemy is a desperate, but calculated risk. Although it provides the main tension of the story, the dramatization of this decision is never fully realised.