Home / LIFESTYLE / REVIEWS > / FILM REVIEWS / Fans will be delighted that the Belchers have made it to the big screen with this topical, musical crime caper. 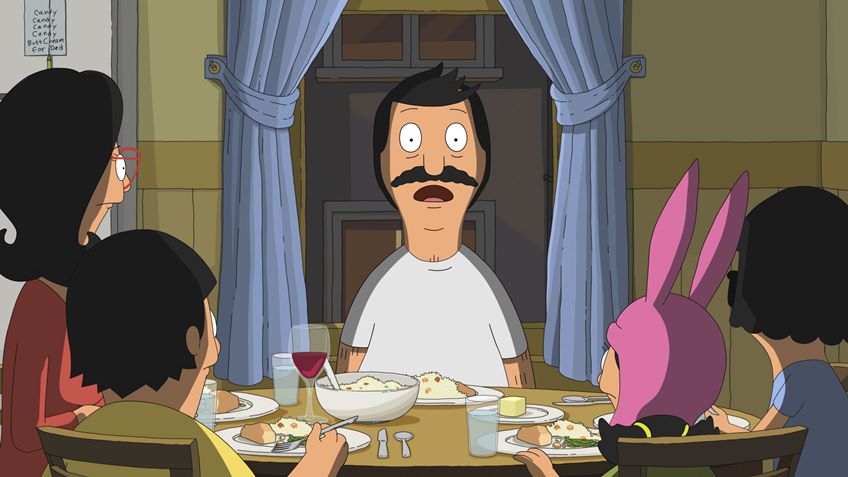 Fans will be delighted that the Belchers have made it to the big screen with this topical, musical crime caper.

The hit Disney television series, Bob’s Burgers, created by Loren Bouchard, has made it to the big screen as a stand-alone family movie. To keep it true to itself, Bouchard co-directs with series producer Bernard Derriman and co-writes with Nora Smith who co-created another musical series, Central Park, with Bouchard. This is a film that the whole family can enjoy, although adults who are not followers of the TV series might be less amused by the comedy antics than the children will be.

The key to the series’ and the film’s success is not only the authenticity of the family dynamic, but the filmmakers refusal to succumb to sentimentality or moralising. Humour, tinged with genuine compassion is used to great effect.

Unlike the films made from the television series Absolutely Fabulous or Downton Abbey, the working class Belcher family don’t travel to exotic locations in the film. In fact, the movie is not much different from a single episode of the series although it is four times longer.

Nor has the animation changed. The filmmakers retain the cosy 2D animation style, that is atmospheric without being stop-frame realistic. There is something at once comfortingly familiar and surrealistically eerie about the set design and animation.

Newcomers might miss some in-jokes and might struggle catching on to the particular delivery of the film’s hilarious lines which are not high-lighted as such in the dialogue. But no one will have a problem understanding the idiosyncratic family members and the way in which they interact as a unit.

Husband-father and small business owner Bob Belcher (H. Jon Benjamin) is worrying about finances with cause. Business is bad and the rent is due. Wife-mother Linda (John Roberts), either by nature or necessity, is the family optimist, always looking at the sunny side of life (and kicking off the first musical number as she sends her three children off to school) even when the situation is truly bleak.

Pubescent daughter Tina (Dan Mintz) has discovered the opposite sex and fantasises over one particular classmate but dares not approach him. Son Gene (Eugene Mirman) is in a band called The Itty Bitty Ditty Committee waiting for his big break and 9-year-old Louise (Kristen Schaal) cannot be separated from her pink bunny hat. She is bullied in school over it and her cowardice. The film devotes considerable time to the story of how her parents contributed to this obsession with the pink hat, and to Louise’s coming-of-age in realising that she is anything but a coward.

The problem that triggers the action is not only downbeat, but familiar to the point of cliché. Bob, a chronic worrier, is so concerned about his inability pay the bank loan in seven days, let alone the rent, that he cannot even cook for Teddy (Larry Murphy), a loyal customer, and one impatient passer-by who wants a burger and is not getting one.

The current economic situation in the UK has changed the plot from cliché to highly topical. Audiences can identify with money worries, depressed high streets, business foreclosures and high inflation and product food shortages driving up prices.

In the case of the Belchers, the food shortages haven’t hit the unidentified seaside town where Bob and Linda run a traditional burger joint and live above the shop. A takeaway burger and a side of french fries is rejected by the inconsiderate manager who tells the Belchers he is reducing his intake of meat and watching his weight.

Things only get worse when a giant sink hole opens in front of their shop, ensuring that even the hungriest burger lover will be put off, notwithstanding a makeshift entrance through the side alley. And just when things could not get worse, their landlord, Calvin Fischoeder (Kevin Kline) who could offer a reprieve, is jailed for the murder of the pier employee, or “carney”, Cotton Candy Dan.

While the Belchers take to the streets, with Teddy’s makeshift burger trolly, dodging the health inspectors, the kids, who have ingested their dad’s problem without fully understanding it, set off to find the real killer of Cotton Candy Dan so that Calvin can be freed. Clues in the sink hole eventually lead the children to Calvin’s brother Felix (Zach Galifianakis), and a case builds that he is the culprit until the film’s big lawyer joke throws everything up in the air.

The unsophisticated, rather silly crime caper plot is hardly one for adults, but it’s exactly the kind of situation that curious children might get into for all the right reasons. Its purpose seems to be to entertain the younger members of the audience as they watch the Belchers drive around in go-carts and see the Fischoeder’s locked inside a disused submarine and set adrift.

Unlike many children’s films where the kids take the initiative and outsmart the parents, it is ultimately the parents that need to rescue the children, who find themselves in the Fischoeder’s Secret Club House, their tell-tale bicycles abandoned up on the pier. But it is the family, working as a team, that is stronger than any individual.

Despite the clever one-liners, and the more upbeat ending, there is something sobering about the Belchers’ financial dilemma, the deserted high street and the down-and-out wharf that has seen better days. If, by the end, the Belchers are considering changing their beef-based menu, there are more serious changes ahead, which might even include pay TV subscriptions.