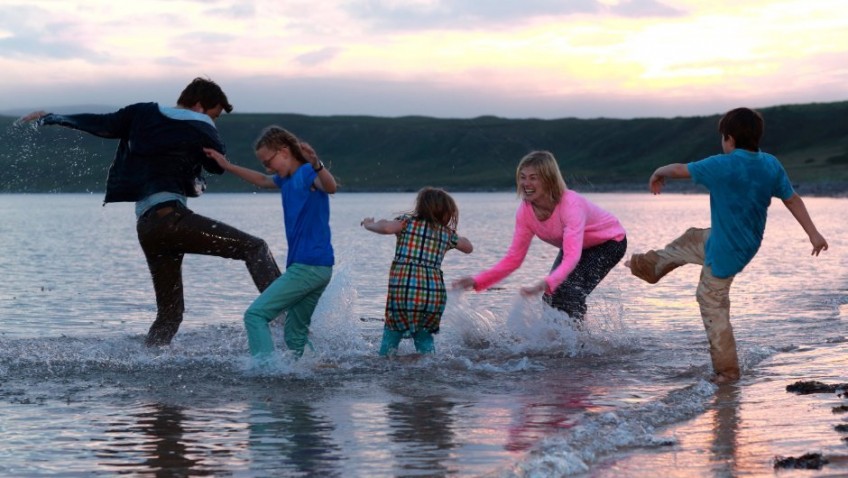 The children prove to be far more mature than their parents

WHAT WE DID ON OUR HOLIDAY (Lionsgate). Mum and dad (Rosamund Pike and David Tennant) and their three very young children go to the highlands of Scotland to celebrate the 75th birthday of granddad (Billy Connolly), who is dying of cancer. The children (who, incidentally, improvised their dialogue) are far more mature than their parents. The bickering and poor child management make for pleasant TV sit com. The sombre Viking funeral on the beach feels as if it belongs in some entirely different film, possibly a Nordic art house movie, and the very sentimental, feel-good ending, which follows, doesn’t ring true at all; but the performances are always likeable. 8-year-old Booby Smalldridge is amazingly assured.

BRITAIN’S BLOODIEST DYNASTY: THE PLANTAGENTS (Acorn). The fun and energy of this low-budget, lightweight documentary comes from the charisma of the presenter, historian Dan Jones, and the locations (castles, cathedrals, ruins in England and France) and the original documents. The script is jaunty, snappy, trendy and cliché-ridden. Some will be surprised the English court speaks French and that Richard II is nothing like Shakespeare’s Richard. King John is left out completely and, there’s no poker for Edward II. The reconstructed tableaux, acted by Romanian actors, may raise a smile.

THE RIOT CLUB (Universal) is an adaptation of Laura Wade’s play, Posh, and not as good as the original.  The characters are contemptible: aristocratic public school boys, snobs and bullies, who think the country belongs to them and they can do whatever they like. Their initiation ceremonies and general Behaviour are despicable. Debauchery is raised to an art. They are members of an elite dining club (a parody of the Bullingdon Club) who meet twice a year to gorge, get drunk and trash the premises. The film, directed by Lone Scherfig, is unfocused and concentrates on the hero (Max Irons) and fails to give enough time to the villain (Sam Clafin).

SUNFLOWER (Argent).This Italian melodrama, released in 1970, is an old-fashioned weepie. During World War 1, a soldier, who has just got married, goes off to fight on the Russian front and fails to come back when the war is over. His wife goes in search of him and discovers that, whilst suffering from amnesia, he married a Russian woman, who had saved him from death. The casting of Marcello Mastroianni and Sophia Loren and the fact that they are directed by Vittorio De Sica may lead you to expect something less heavy-handed. Henri Mancini’s score is way over the top.

BIDDY (StudioCanal). Christine Edzard’s film is an acquired taste. Released in 1983 and rarely seen, it gives a sad portrait of the mundane life of a lonely nursery maid in Victorian England. The only person she talks to are the children; and when they are grown-up and have left home, she has only herself to talk to. She never gets out of the house. Her life is restricted to the nursery and the staircase. She keeps herself busy with housework. The irony is that a film, which is potentially as boring as Biddy’s life, gets less boring the longer it goes on. Celia Bannerman is Biddy.

THE CIRCLE (Matchbox). An unsatisfying docudrama about Ernst Ostertag and Robi Rapp, two elderly men, who, in 2003, became Switzerland’s first same-sex married couple. They remember their gay younger days in liberal Zurich in the 1950’s, which turns out to have been not so liberal after all. Ernst was a teacher and Robi was a drag artist and they were involved with a pioneering gay magazine. Homosexuality was legal in Switzerland but, following two murders, gays were harassed by the press and the police who raided the magazine’s premises. Their younger selves are awkwardly played by two professional actors.