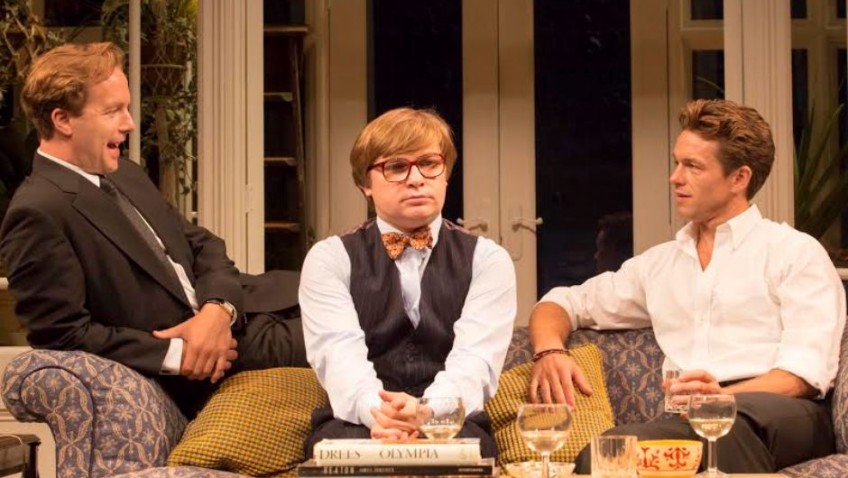 My Night with Reg feels like a modern classic

Kevin Elyot’s excellent comedy of gay sexual manners was already a period piece when it was originally staged in 1994.

Successfully revived last August at the Donmar Theatre, Robert Hestie’s production has now got its well-deserved transfer to the West End with the same cast.

My Night with Reg, which lasts just under two hours and is played without interval, is set in the 1980’s. The action is spread over four years, beginning with a house-warming and followed by two wakes.

Reg, who never appears, is dead, and since nearly everybody in the play has slept with him, they are all at risk. Elyot (who died at 62 just before this production opened) never mentions AIDS; but the 1980’s was an era when AIDS joined forces with the Grim Reaper.

All the actors are excellent and the play seems even better.

Julian Ovenden is a tarnished golden ex-public schoolboy, shallow, idle, rich, promiscuous, completely irresponsible and more vulnerable than he might at first appear to be.

Geoffrey Streatfeild, flamboyantly louche, has all the outrageous camp lines. Richard Cant is a bore (so boring he redefines boredom) and Matt Bardock is his unfaithful partner.

Jonathan Broadbent is the good friend in whom they all confide and whom nobody fancies. Chaste and sexually frustrated, he has a hilarious scene with a cute innocent interior decorator (Lewis Reeves) who is wonderfully tactless without knowing it.

My Night with Reg, frank, compassionate, witty yet ineffably sad, is that rare thing: a gay play that will appeal to non-gay audiences. It doesn’t preach. It doesn’t apologize. 20 years on it feels like a modern classic.