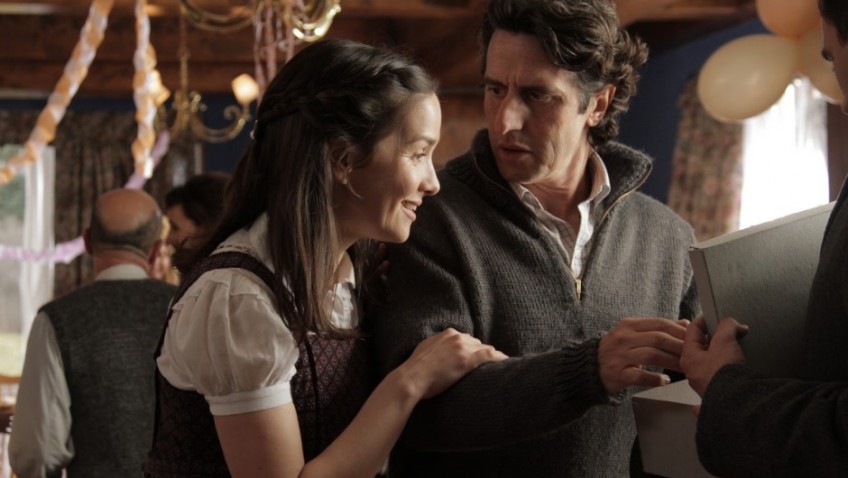 WAKOLDA (Peccadillo). The German doctor in Patagonia in the 1960s, who is interested in genetics, turns out to be the infamous Nazi doctor, who used to experiment on inmates at Auschwitz, and is now on the run from the Israelis.  Josef Mangele, who escaped the Mossad for nearly 30 years, continued experimenting on children and pregnant women. This fictional Argentinean film, based on fact, directed by Lucia Puenzo and with a muted performance by Alex Brendemuhl in the lead role, never really gets to grip with the horror of the subject matter and is certainly not the exciting thriller it could have been.

NIGHT MOVES (Soda). Three radical environmental activists (Jesse Eisenberg, Dakota Fenning and Peter Sarsgaard) blow up a dam. A holidaymaker is killed. Fenning feels guilty. Will she go to the police and confess? Can Eisenberg stop her? The crime and its consequences are just not interesting enough, at either a psychological or a physical level, and the film does not become the existential thriller director Kelly Richardt clearly wants it to be. There is only one moment of real tension and that is when Fenning is having difficulty buying the fertiliser they need to blow up the dam.

BRITISH MUSICALS of the 1930’s Volume 3 (StudioCanal). Four musicals: For The Love of Mike (1932), with Bobby Howes and Arthur Roscoe, and Facing the Music (1933) with Lupino Lane, are farces which rely heavily on slapstick routines; everybody is trying too hard to be funny. Much more interesting are My Song Goes Round the World (1934), with Josef Schmidt, and Heart’s Desire (1935) with Richard Tauber. The name Richard Tauber (who goes from singing in a beer-garden in Vienna to singing in London and back again) will probably ring a bell; but the tenor, Josef Schmidt, I suspect, will be a complete revelation for many people. Only 4 feet 11 inches tall he was too small for the opera stage but he went on to win enormous fame as a recording artist. His passionate singing of “One Life, One Love” is likely to make you want to hear more. He was only 38 when he died.

EREBUS INTO THE UNKNOWN (Signature). 257 people died when an Air New Zealand airplane crashed into the largest mountain in Antarctica in 1979. Accident investigators, untrained in Antarctic conditions, had the unpleasant and life-threatening mission to find, identify and return the bodies. The overwhelming mental and physical ordeal took its toll. The documentary, which pays tribute to the investigators, attempts to reconstruct the horrendous carnage and the cover-up by the airline company (which tried to blame the pilot), but,as investigative journalism, it is far too tame, and fails to do justice to either the carnage or the trial, leaving the viewer unsatisfied and wanting much more detail and insight.