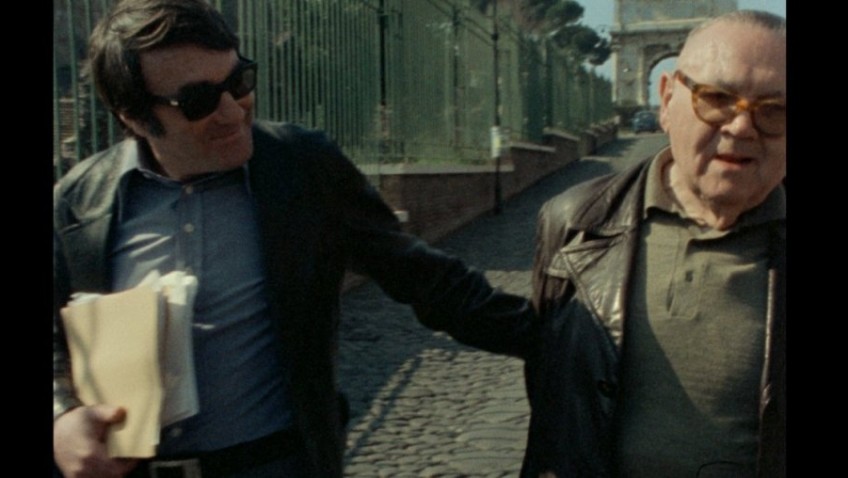 Claude Lanzmann’s brilliant reappraisal of a great man who paid the price of survival.

If there were an Oscar for best performance in a documentary, it would have to be a joint award: first to the late Benjamin Murmelstein, the plump, spirited 70-year-old interviewee, who lets loose his detailed, quick-witted, ironic, insightful, critical and defensive exposé of survival under the Nazis to a handsome, 50-year-old Claude Lanzmann in 1975.

And jointly to Lanzmann, the now 87-year-old Director whose poignant in situ readings from Murmelstein’s memoir make your blood boil as they bring tears to your eyes.  Lanzmann’s film, The Last of the Unjust is not only a fascinating and moving documentary about a little-known aspect of the Holocaust; it is a reappraisal of the reputation of Murmelstein, the eponymous last ‘Jewish Elder’ of Theresienstadt concentration camp, and a thought-provoking study of the nature of collaboration when no alternatives exist.

When the former French Resistance fighter-turned-documentary filmmaker Claude Lanzmann began making Shoah, his monumental and controversial documentary about the Holocaust in 1974, one of his first interviewees was Murmelstein, the only ‘Jewish Elder’ to have survived a concentration camp.

This extensive footage was left on the cutting room floor. It would have made Shoah too long and was, Lanzmann says, ‘in the wrong register’.  Shoah was a film of ‘unremitting tragedy’ but the week-long interview with Murmelstein, shot in Rome where he would live in exile until his death in 1989, was about survival and life.  It took 37 years, and his outrage at seeing some of his raw footage at a screening in Vienna, for Lanzmann, in his words, ‘to accept that I had no right to keep it for myself.’

The Last of the Unjust is 3 hours 20 minutes to Shoah’s 9 hours 20 minutes.  There is only one, but in-depth interview with Murmelstein. Lanzmann still puts himself in the sites mentioned, but he was 87 when, in 2012, he undertook the task of adding new footage to the original 1975 interview.

Murmelstein was the former, and last, President of the Nazi-engineered Jewish Council of Theresienstadt (60 kilometres northwest of Prague), a concentration camp for elderly and infirm Jews that was cynically called a ‘model ghetto’ by Adolf Eichmann.  Benjamin Murmelstein was the Chief Rabbi in Vienna in 1939 when Austria was annexed by Nazi Germany and the Czech Republic dismantled and replaced with the puppet state of Slovakia and the Protectorate of Bohemian Moravia.

Eichmann’s intention was use Theresienstadt as a ‘show camp’, a propaganda tool in 1941 to mask the progress of the Final Solution.  Even the suffering Jews who were sent there, believed the propaganda and left their homes with hope.  But the ghetto, built to house 7,000 soldiers at most, soon housed 50,000 Jews as slaves.

In the ghetto’s four year existence, there were three Jewish Presidents appointed by Eichmann. Jacob Edelstein, a Zionist from Prague and Paul Eppstein from Berlin were both murdered: shot in the head.  Murmelstein was appointed with no illusions. Unlike Edelstein who cherished youth above age, Murmelstein could not bear to see the suffering of the elderly in the ghetto.  He therefore did everything he could, regardless of how it appeared to the world, to help them survive.

He admits to the accusation of withholding food; but explains that he only did so to force the inmates to consent to typhus shots.  It was his tough love approach, and his own survival, that contributed to his being tried in Czechoslovakia for collaboration after the war and explains why he was invited to be a witness at Eichmann’s trial.

Although the case against Murmelstein was dropped for lack of evidence, he never stepped foot in Israel and remained in Rome where he says he never felt wanted or at home. Gershom Scholem, the late Professor of Jewish Mysticism at the Hebrew University of Jerusalem, who was famously opposed to Eichmann’s execution, thought that Murmelstein should have been hanged.  When Lanzmann confronts him with this, Murmelstein fires back: ‘The gentleman is a little capricious with hanging, don’t you think?’

But, as Lanzmann’s film comes around to establishing, Murmelstein was not a collaborator.  He was simply cleverer and more of a realist than his dead predecessors and willing to make moral compromises to keep his people alive. He could also ‘read’ Eichmann as much as anyone could. In 1938 Eichmann had instructed Murmelstein to organise the forced emigration of all Jews from Austria.

Murmelstein used his position to help some 120,000 flee to safety. Murmelstein could have left but chose to remain. When Lanzmann asks him how he survived, Murmelstein answers that, ‘like Scheherazade, I told stories.’ He adds that he ‘took risks’ but realised he was too essential to Eichmann to be killed as easily as the others.

Lanzmann says that it was extremely difficult to arrange the interview with Murmelstein and it is sad that he did not live to see his testimony so brilliantly illustrated by Lanzmann. At one he stands at the site of mass ‘disciplinary’ hangings, stoically reading from Murmelstein’s memoirs, only to end his tour, clearly overwhelmed, with his own spontaneous words: ‘the bastards.’