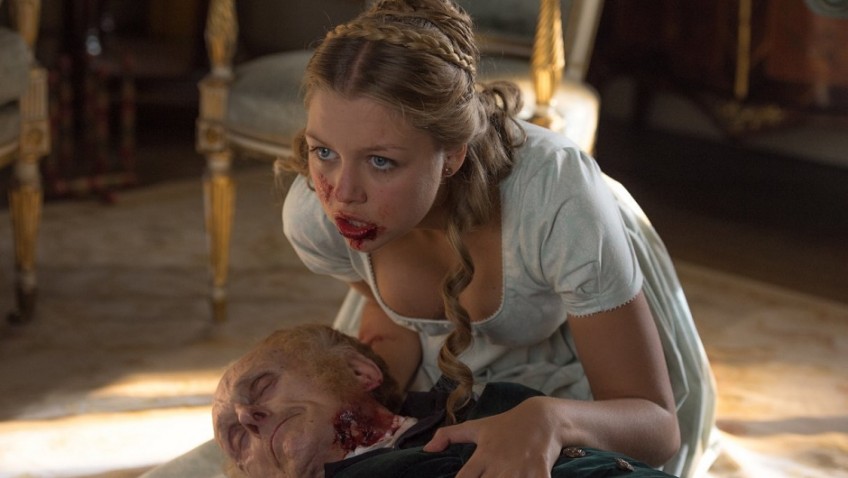 There have been so many adaptations, spoofs and spin-offs of Jane Austen’s Pride and Prejudice that it was just a matter of time before a zombie apocalypse worked its way into the story.  No, you don’t need new glasses.  The Bennet family has more to contend with than eligible bachelors. Burr Steers (Charlie St Cloud, 17 Again, Igby Goes Down), the unlikely writer/director behind Pride + Prejudice + Zombies, is clearly revelling in the surreal fit of a literary classic with a staple of the horror genre. And until the novelty wears off thirty minutes into the film, it’s a lot of fun.

Instead of fighting Napoleon’s troops, those uniformed British soldiers that the young Bennet sisters find so attractive are risking their lives to contain a self-replenishing army of zombies. Families have mobilised to protect their homes from the invasion although the aristocratic salons are in denial when it comes to their own.  Even the aristocratic Darcy (Sam Riley) is working for a living as a Colonel in the Zombie War and has become a celebrated zombie-hunter, using his name and position to infiltrate Georgian mansions. Once inside, he removes the lids from jars of carrion flies to detect the undead embedded among the guests.

Mrs Bennet (Sally Phillips) is still obsessed with finding her daughters a wealthy husband, but the family (Mr Bennet is played by Charles Dance) is equally focused on protecting themselves from the zombie plague. Elizabeth (Lily James, Cinderella), Jane (Bella Heathcote), Kitty (the model Suki Waterhouse), Lydia (Ellie Bamber) and Mary (Millie Brady) have been sent to a training camp in Japan to master martial arts and the use of weapons.  A running joke is that the super rich go to China for training and the Bennet’s are mocked for speaking Japanese and not Mandarin.

As in the original novel, The Bingley’s move in next door and Mr Bingley (Douglas Booth) falls for Jane, much to Mrs Bennet’s delight. When the girls dress for the Bingley ball they stuff daggers into their garters and when they ride, they have rifles on their saddle bags.  Darcy only becomes smitten by Elizabeth when he sees her in action at the ball, slaying an army of zombies.

Jane’s confinement at the Bingley’s is, as in Austen’s novel, a ploy to give her time to bond with Mr Bingley, but here, there is a fear that Jane has been bitten by a Zombie on her way to the house.  Parson Collins (Matt Smith) makes the fatal mistake of telling Elizabeth that she will have to give up her fighting to become his wife.  Collins still lives on the estate of the fabulously wealthy Lady Catherine de Bourgh (Lena Headey), but here, Lady Catherine is a prominent zombie killer.  Wickham (Jack Huston), for example, is still a cad who massages the truth, but his untrustworthy, evil nature is far deadlier than an affront to the Bennet’s reputation.

The clever zombie-adjustments roll along, but with diminishing returns. There is even an unintended and unforeseen parallel with another adaptation of a literary classic – the recently broadcast War and Peace, which also starred Lily James.   Parts of the film are reminiscent of the gore and destruction in that mini-series, while the ending – with Lilly James in profile and bosom heaving, smiling, ‘yes’ to a wealthy man’s proposal – is positively déjà vu.

There is one element of the story that the filmmakers did not change, but perhaps should have. With only the heart of London fortified (by a bridge over a canal) against the zombie onslaught, the wealthy merchants and land owners like Bingley and Darcy, with their ties to the land, if not to the slave trade, are cut off from their markets and nothing grows.  Mrs Bennet is living in another world if she believes that Darcy’s money will count for much with most of England a contaminated wasteland.

Another problem is the mix of genres. The comedy that stems from the novelty of the idea and the fun in identifying the new roles for familiar characters, wanes, particularly during the extensive battle scenes. And in the midst of this battle is, of course, the romance between two equally talented fighters – Elizabeth and Darcy. Steers manages to finesse the various genres into a precarious co-existence, but they cannibalise one another, leaving each a tad undernourished.

If you excuse the extended metaphor, combining a zombie apocalypse with Jane Austen’s masterpiece is a bit like adding a jar of cream sauce to a good, fresh piece of fish. It’s a clever way to embellish the menu with a new dish; but why bother when the fish is so good on its own?