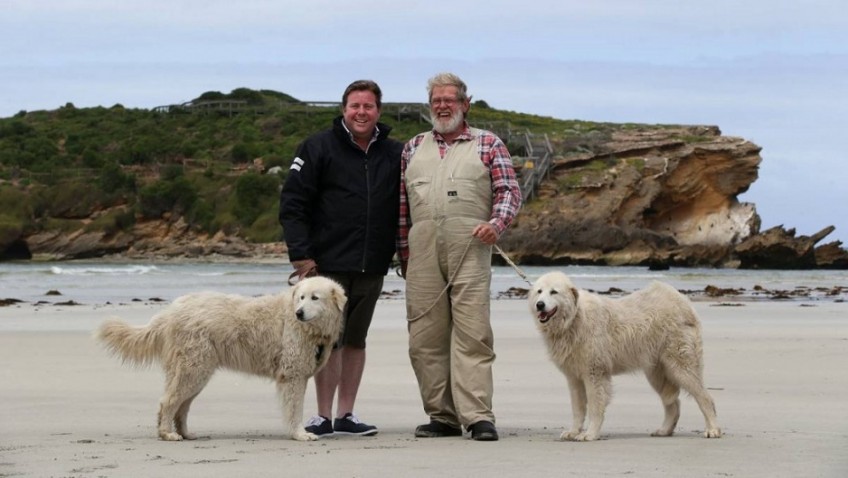 Filmed on the beautiful Australian coast near Melbourne, and based on a true story, this tale of cute little penguins saved by an ungainly misfit of a dog named Oddball offers young children wholesome entertainment with a positive message.  Adults, however, might not see past the predictable, saccharine story and lacklustre script.

Emily Marsh (Sarah Snook) has been struggling to maintain the penguin sanctuary run by her late mother.  Emily has sacrificed the last thirteen years of her life for the sake of mother’s legacy, and is now allowing herself to start thinking about finishing school and seeing the rest of the world.

Emily has been receiving a grant from the Warrnambool Council for years because of the sanctuary’s tourist value.  Recently, however, a combination of the dwindling number of penguins and a potentially lucrative whale watching proposal threatens Emily’s mission – and her feisty 9-year-old daughter Olivia’s (Coco Jack Gillies) happiness.

The tiny Middle Island where the penguins come to mate and sleep can be reached by a causeway that is far shallower than it appears.  This is how Emily and her team reach the island to keep track of the penguins and how the Council keeps count.  When the number of penguins falls below 11, Emily will lose her grant.  The trouble is that the foxes have discovered that they, too, can access the sanctuary and these ruthless predators have been steadily reducing the penguin population.

Emily’s dad, Swampy Marsh (Shane Jacobson),  is no help.  Ever since his wife died, Swampy has distanced himself from the penguins and has devoted himself to his free range chicken farm.  His relationship with Emily is further strained as Swampy disapproves of her new, boyfriend, Bradley Slater (Alan Tudyk), a city slicker who is persuading Emily to move away with him.  Swampy’s suspicions are confirmed when he discovers that Bradley is backing the whale watch proposal rather than supporting Emily’s sanctuary.

Swampy has another problem. His beloved sheep dog Oddball does not like chickens any more than he does sheep and the rambunctious, accident-prone dog is on probation for wreaking havoc on a town fundraiser.  Then one day, Swampy notices that Oddball has established a paternal rapport with a wounded penguin that is being cared for on the farm.  Suddenly, Swampy comes up with a plan that could save the sanctuary, cheer up Olivia and turn Oddball into a local hero.

The cute animals, enticing landscape and sharp-minded Olivia’s enthusiasm will appeal to the youngsters, though older children’s attention will waiver with the lack of tension and the cop-out ending.   Stuart MacDonald’s film could use more wit, laughs, and subtly in the acting department to cater to the adult audience.