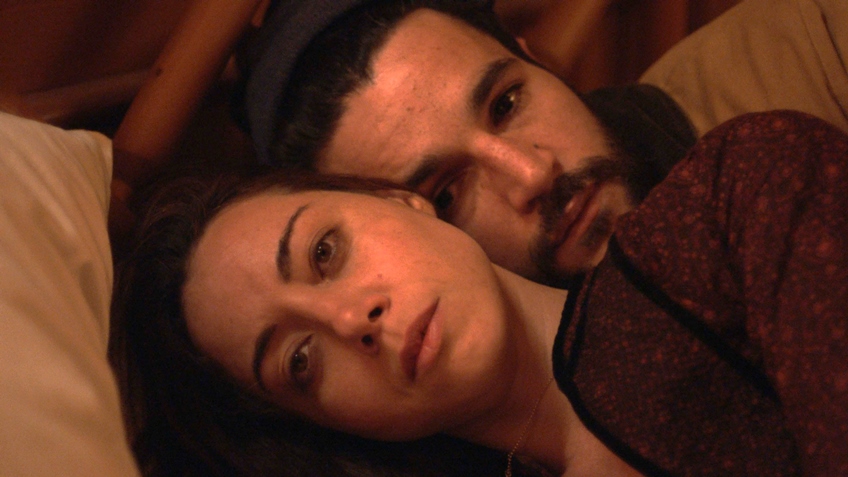 A promising thriller about a film actress-turned- writer loses the plot.

In Tahir Shah’s In Search of King Solomon’s Mines, a Western explorer receives his Ethiopian hosts’ hospitality, and searching for something to offer in return, comes across an unused pressured lantern with kerosene. A few minutes later he notes that, despite “the instructions trampled underfoot” the light was being activated. The protagonist writes with irony and understatement: “It was an awkward moment. We were burning down our host’s house, a situation which any guest seeks to avoid.”

Allison (Aubrey Plaza), an actress and aspiring writer-director, learns this lesson the hard way in the first, and best part of Black Bear. Written and directed by American actor and independent filmmaker Lawrence Michael Levine, Black Bear sets out to be an edgy, neo-noir, blurring the lines between fiction and reality like Ruby Sparks, Adaptation and Living in Oblivion. Unfortunately, like the film’s fictional filmmaker, Levine loses his way.

In the first shot, Allison sits like a statue on a dock surrounded by a beautiful, foggy lake. She stands up in a choreographed manner that we will see over and again, folds her towel, and retires to her room in an isolated, traditional lakeside house. She curls up with a notepad by the window and writes: Part One: The Bear in the Road.

Cut to this same young woman arriving at a lakeside house in the Adirondack Mountains where she is met by a convivial host, Gabe (Christopher Abbott), a New Yorker who is her age. Intrigued by his guest’s profession, Gabe enquires what kind of films she has appeared in. ‘Unsuccessful, small ones that nobody wants to see,’ she replies in a disarmingly candid, cynical yet self-effacing manner that seems to be her modus operandi.

Once in the house, Allison is introduced to Gabe’s pretty, blond girlfriend, Blair (Sarah Gadon). At first the talk is civil as the couple enquire about their intriguing guest’s new film: ‘Were you thinking of setting it here, or did you just come here to write?’ While the two women exchange compliments that suggest they are inspecting one another, a tension arises that never lets up. Blair has a competitive streak and a nasty one. She is continually belittling and contradicting Gabe, while provoking him and their guest.

Gabe is not entirely passive. He warns Blair, who is pregnant, about having a glass of wine. Soon she is drinking heavily and forcing Gabe to dance with Allison. There is chemistry between the two that Blair observes with satisfaction, as though delighted to have created something real to argue about.

Later that night, after declaring his love to Blair in bed, Gabe follows Allison to the dock, where she makes a startling confession, ending with, ‘I think all men should die.’ She then dives into the lake, and Gabe, smitten, follows. The two emerge, shivering and rush into the house to get warm in one another’s arms.

What ensues is gripping stuff, leaving the viewer on a cliff edge as a caption on the screen announces ‘Part Two: The Bear by the Boat House. We once again see Allison seated on the dock as before.

In this half of the film (and, it seems, of Allison’s script) we see the same cast of three, playing different characters, but they are now in a film shoot. Around them is a larger cast and members of the crew, busy making an independent film in the house on the lake. We learn that the harried producer has hired the location for a specific period, and they are behind schedule. They have just one afternoon to complete an increasingly shambolic shoot.

This time Gabe (Abbot again) is a cynical, two-timing director. Like the novelist in the film Ruby Sparks, Gabe is a controlling manipulator. He believes he can get the best performance out of his wife, Allison (Plaza again) through psychological manipulation, a strategy which he discusses with Allison’s attractive co-star, Blair (Gadon again). Only Gabe goes too far, and Allison, believing that Gabe is really cheating on her, nearly derails the production when she begins drinking heavily.

Scenes from the first “act” recur in the second with different partners. Just as Blair and Gabe had made up after their big argument in the first act only for Gabe to seek out Allison on the dock, so Gabe comforts Allison while the rest of the crew attend the wrap party. Here, she tenderly refers to Gabe as “Bear” but there is another bear waiting for her by the boathouse.

Are we witnessing the creative process entirely through the writer’s imagination as she envisions two possible scenarios for her script? Is Allison playing out real life issues as a kind of therapy? This is the game that Levine plays with the audience, but he does not seem to realise that by the end, we are no longer playing along.

Lawrence Michael Levine and his real-life wife, Sofia Takal have appeared as actors in three films together with one or the other of them directing. Clearly Black Bear is a kind of insider’s take of this experience, or its culmination. But this conceit backfires: the artificial, self-indulgent second act lacks the tension and forward propulsion that makes the first act so engrossing and rudely interrupted.

While Plaza pulls out all the stops to portray Allison as a fragile wreck, whose paranoia, inebriation and misery outdoes Blair’s in the first act, the performance exists in a void and proves taxing as the viewer is not invested. That is because there is nothing in the story itself to trigger such conduct. It only exists in a script – and in Gabe’s plot to achieve his perfect fiction through psychological manipulation.

As in Tom DiCillo’s Living in Oblivion, also about a chaotic independent film shoot in New York, everything that can go wrong, does go wrong. DiCillo’s film held our interest with its characters, humour and humanity until the end, but Levine makes the mistake of forgetting about the audience.

You can read our review of Ruby Sparks by following this link.