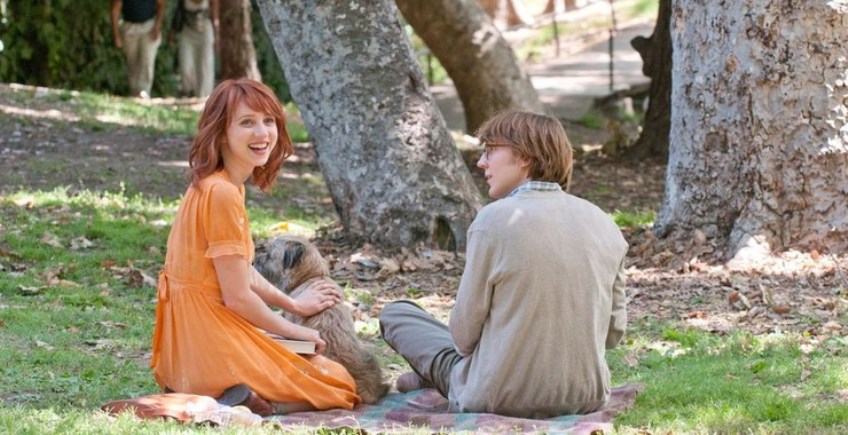 In the 2006 film Stranger than Fiction, IRS auditor Harold Crick becomes convinced he is a character in a novel whose fate is being determined by a narrator he hears, but to whom he cannot speak. His psychiatrist, and a professor of literature, both believe that Crick’s life is too boring to be the subject of a novel. On closer inspection, the professor senses a literary mind at work and decides to help Crick identify the author.

Ruby Sparks, directed by husband-and-wife team Jonathan Dayton and Valerie Faris (Little Miss Sunshine) and written by its co-star, Zoe Kazan (Meeks Cut Off, Me and Orson Welles) also has an “imagined character” conceit, but tells the story from the author’s, rather than from the character’s point of view. The author is 30ish, one-time wunderkind novelist Calvin Weir-Fields (Paul Dano, Let There Be Blood) who visits his psychiatrist (Elliot Gould) – for writer’s block. Like Crick, Calvin is given an assignment. He is sent home to write a page about a character he invents who likes his somewhat annoying dog, Scotty.

Calvin follows these instructions, and, like other authors, grows attached to his character, whom he names Ruby Sparks. But Calvin’s fondness for his character is different. He not only falls in love with Ruby; he ends up living with her – literally. In this manner, Ruby Sparks becomes a high concept film and a low point in the portrayal of women in film.

With Little Miss Sunshine, Dayton and Faris delivered a refreshing, funny, fun, feel good film that rejected the materialist values of an economy about to burst and the obsession with female perfection that its society fostered. If the film had a fault, it was that it became too quirky in places, a fault which the filmmakers magnify in Ruby Sparks.

As written and played by Kazan, Ruby is just another free- spirited, adorable, easy-going girl who has no real personality because Calvin does not give her one. And the film has no social context as Calvin is absorbed in his narrow world. But there is a much greater problem with Ruby Sparks, which turns Little Miss Sunshine’s charm and feel-good factor into something sinister – even frightening – and depressing.

Women watching this film might infer that Calvin is less enamored with Ruby than with his ability to create and control her. This becomes clear when Calvin introduces Ruby to his naturally skeptical brother, Harry (an entertaining, humorous performance from Chris Messina). To convince Harry that Ruby is not only real, but is his creation, he types some lines in French and Ruby immediately starts speaking in (heavily accented) French. The brothers giggle triumphantly with no thought for the unknowing puppet, Ruby.

This is not romantic comedy but anti-romantic creepiness. Calvin does stop writing for a while to preserve his relationship with Ruby, but Ruby has even less control over her life than does Eliza in Shaw’s Pygmalion. At least Higgins, the control-freak professor who is transforming Eliza on a wager, is teaching her something and allowing the impoverished girl to live in luxury. Ruby learns nothing and she has to do the cooking.

After Ruby hits it off with Calvin’s free-spirited mother (Annette Bening) and boyfriend (Antonio Banderas) the relationship shifts. While Ruby socialises and becomes more independent, Calvin becomes jealous. He snaps at her cheerfulness, bringing her down. Have “they” lost that lovin’ feeling or has Calvin lost the plot?

Whatever regrets Calvin has about Ruby, he gets a best-selling novel, entitled The Girlfriend, out of the relationship and new female fans. There are no negative consequences, and whether he has really learned anything from his experience is anybody’s guess.

Paul Dano’s Calvin could well be the adult version of the voluntarily mute whiz-kid he played so marvelously in Little Miss Sunshine. But Kazan, Dano’s off-screen girlfriend and – it might be an in-joke – the one in the creator/writer’s seat in real life, does not give Calvin any endearing qualities here. If Ruby Sparks were a psychological thriller about a controlling personality, it would have been an interesting take on male fantasies, dominance, and the creative process. But, though ambiguous, the ending does not lend itself to that interpretation and the film desperately tries to hang onto its identity as a romantic comedy.